Want a chance to witness history? Win four tickets to see the Brumbies vs Crusaders 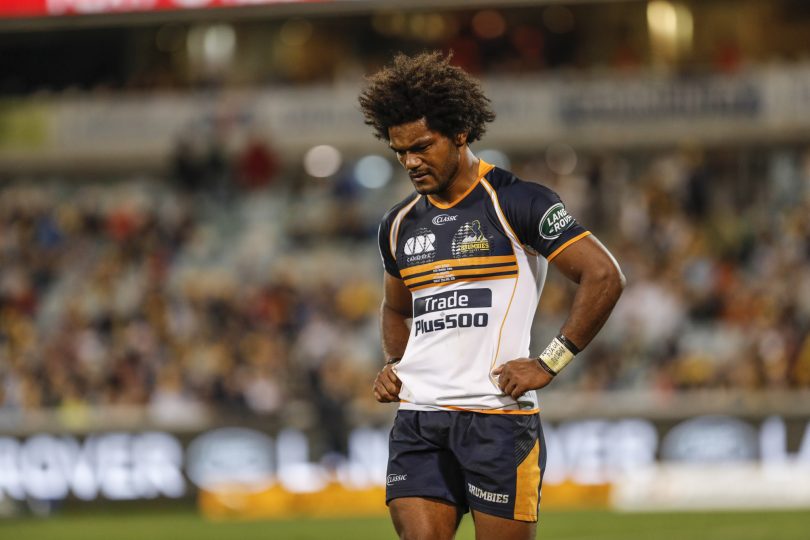 RiotACT has FOUR gold tickets to give away to one lucky fan courtesy of Bendigo Bank – Official Community Banking Partner of the Brumbies. To win the tickets to see the Brumbies take on the Crusaders this Saturday night, answer the following question:

What is your favourite Brumbies moment against the Crusaders and why?

All the correct answers will be put into a hat and pulled out on Friday afternoon and one lucky Brumbies fan will receive gold tickets to the match on Saturday night.

There are plenty of moments to choose from, with the Brumbies and Crusaders sharing a rich history and have met in Super Rugby Grand Finals on three separate occasions.

The Brumbies last defeated the Crusaders in Canberra in 2009 with the New Zealanders having the upper hand in recent years.

However, a new-look Brumbies outfit pushed the eventual champions close in Christchurch at the beginning of 2017 and will enter the fixture in a positive frame of mind.

This fixture has been earmarked by the club as their Military Round where the Brumbies will recognise the important part played by the Armed Forces in this country.

The pre-match action will feature the first XV’s of ADFA taking on RMC whilst the Women’s teams from both academies will feature in the Foxtel Touch 7s at the interval.

This is a big one, the 2017 Super Rugby champions are in town. Don’t miss out!

6 Responses to Want a chance to witness history? Win four tickets to see the Brumbies vs Crusaders
Filter
Showing only Website comments

2004, crusaders made a last ditch comeback but Roff sealed the deal ? The Brumbies created a lot of legends that year ?

Definitely has to be the 2004 Super Final. What a win by the Brumbies against a gold-class Crusaders side. Aussie Super Rugby ain’t like that anymore!

The 2004 grand final. We were there and the Brumbies won.

Hi Louise,
Congratulations! Your name was drawn from the hat and you have won four tickets to see the Brumbies vs Crusaders! Thanks for reading the RiotACT.

Thanks. Looking forward to the game.

Matt Henry - 1 hour ago
Allison Jay if she says that then u could only blame boring parenting. Canberra is a great place to bring up kids ans live. View
Allison Jay - 1 day ago
Kat Rothwell haha yes indeed View
Food & Wine 111

Jody Kisbee - 2 hours ago
Sounds like a plan View
Jodie Roberts - 2 hours ago
Julia McFarlane what are you two up to this weekend? This looks lovely View
Jo Smith - 5 hours ago
Kathryn Sequoia it sure does K View
Sport 5

Border_Libran - 5 hours ago
Hi A_Cog, I’ve just found your comment, if you still reside at Oaks Estate I would be interested in contacting you, I was p... View
Breaking 1

Capital Retro - 5 hours ago
How unlucky is this dude? I mean, it's hard to even spot a police car in Canberra let alone hit one. View
Property 15

Harley Quinn - 7 hours ago
Canberra has NEVER been a peaceful city. I was kidnapped in 1993. It's nice that some people still have that illusion though. View
Business 18

Bob Jones - 13 hours ago
Deb Wheare And Lynne Meredith... I've heard because of the more right someone who identifys as being an Aboriginal or Torres... View
Kev Martin - 23 hours ago
I find If you stop breaking the law, you don't get locked up View
Deb Wheare - 1 day ago
Jacob Torresan face palm View
Community 12

During the 'unprecedented' year we all experienced in Canberra during 2020, lots of new words and emotions entered my vocabulary....
News 1

The victim of an attempted bag-snatch outside Belconnen Mall last Sunday (10 January) says her impression of Canberra as a...
Food & Wine 111

A little under a year ago, the ACT Government announced that e-scooters can be legally driven on shared paths and...
Sport 26

@The_RiotACT @The_RiotACT
Stories about Summernats, snakes, Skywhale & a new venture from the team behind Bombolini doughnuts all featured among the top stories on the RiotACT this week. Catch up with our latest newsletter https://t.co/4JyEruj9tg (12 minutes ago)

@The_RiotACT @The_RiotACT
Eleven years after he was first drafted into the AFL while still at Erindale College, Jason Tutt is returning home to Ainslie Football Club https://t.co/0D5tHBFya1 (1 hour ago)

@The_RiotACT @The_RiotACT
This remarkable seafront complex for sale near Narooma is your chance to purchase a unique residence with optional tourism business opportunity https://t.co/Fze10GhLLY (2 hours ago)