Waste everything at McGregor Hall 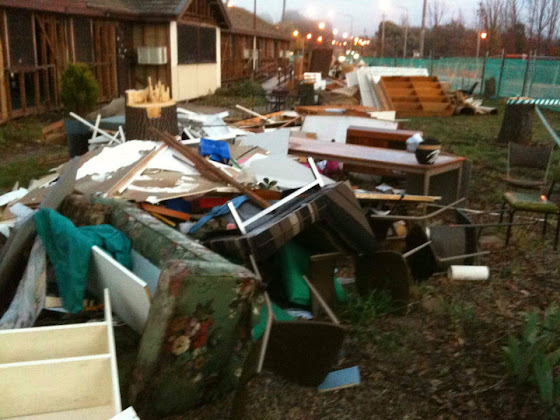 The unseemly haste at the demolition of McGregor Hall continues to amaze.

Photos have emerged on Facebook of the destruction of community property (fully functioning kitchen, the crockery including the Pensioners Club mugs, light shades, solid old office desks, tables and chairs, rotary awards…) as the Government and ANU attempt to eradicate all memory of its existence as quickly as possible.

I often parked my car in front of it when I was attending the ANU about 10 years ago and was amazed it was still standing then. It was a rapidly-composting demountable shack.

But I really don’t care about MacGregor hall either. It’s the vandalistic waste of secondhand furniture that gets to me.

So much for the ACT Government bleating about NoWaste. There are plenty of people in the ACT who could make good use of the furniture etc which has been tossed into piles. Looks like the stuff is ready to be junked and put into landfill. Disgusted.

I was just wondering if the the building covered (to OH&S specifications)while the asbestos was being removed so as to protect the workers and passers by?

That should read “was covered” …dam slow keyboard!!!

I was just wondering if the the building covered (to OH&S specifications)while the asbestos was being removed so as to protect the workers and passers by?

The gear inside almost looks as good as the outside. In other words, crap. I really can’t believe people are still trying to preserve this junk. It has next to no historical value and the building is shoddy at best. I hate the ACT Governments decisions on a lot of things and their lack of public consideration, but this isn’t Cameron offices, it is an asbestos shack.

bit tricky when there’s a surprise lockout of the building VG.

Not to mention that the gear (the best stuff there was the recently-refurbed kitchen and the snooker table) belonged to the ACT Government, so taking it would have been theft.

But what happened to the Pool Table?
I hope that is not just tossed out in that mess.

I want that bookshelf

But I really don’t care about MacGregor hall either. It’s the vandalistic waste of secondhand furniture that gets to me.

You’re not the only one who had never heard of it. When this issue was first covered by RA I caused considerable embarrassment to myself by thinking it was in Macgregor (west Belco) and berating the OP for spelling the name wrong. In the ensuing months I’ve become convinced that the demolition of the hall was the right decision, although I would have preferred a new, modern community facility built in its place rather than new student accommodation.

The demolition of McGregor Hall merely continues the process of urban renewal in the precinct. A few years ago the buildings housing PhotoAccess and other services were redeveloped and the generally rundown and forgotten area had new life breathed into it. Surely nobody would claim that the City West area isn’t a lot better now than when those asbestos-riddled humpies were there surrounded by weeds and rubbish.

In a young city like Canberra, heritage is something which has a broader context than in other places. Witness the attempt to put a heritage order on the ugly, concrete cancer riddled Cameron Offices which were built in 1974 and were an embarrassing eyesore and a blight on this city. But in this latest case the right decision was made to redevelop the area surrounding – and including – McGregor Hall. It’s called progress, and thank goodness commonsense won out in the end.

I think Chairman Stanhope of the PRC was channeling one of Sir Joh Bjelke-Petersen’s Deans Brothers Moments when he ordered the hall to come down.

Do we know what the site will be used for in the future?

I can’t believe that there wasn’t some sort of community garage sale? Was the property owned by the ANU? Because I know that ANU has policies on the disposal of assets, and I’m pretty sure “run them over with a bulldozer” isn’t on the list of disposal methods…

Community property that the ‘community’ cared so much about they left it in a building that was to be demolished. It’s actually called abandoned property.

The building has no heritage worth or value, and only became ‘beloved’ when its end was nigh.

bit tricky when there’s a surprise lockout of the building VG.

I want that bookshelf

it’s a bit sad really that stanhope has taken it upon himself to completely eradicate any memory of the place. One would think it was petty and mean spirited?

Helen Brinsmead - 3 hours ago
Are they? Are they really? For a city state of 400 000 they're pretty good. Been to Geelong, Launceston or Elizabeth lately? View
Ryan Molyneux - 4 hours ago
Helen Brinsmead and that's exactly why our local council facilities, health services and education services garbage. View
Michael Roy - 4 hours ago
I strongly argue for paid parking to be used for local public realm. Eg paid parking in Braddon should be used for beautifica... View
News 4

Jo Telfer - 4 hours ago
Doug Damn, well that sucks. Another idea: make it a little kids only thing ..seems the momentum is the main factor in the sev... View
Doug Jackson - 4 hours ago
Kane P-s from a financial perspective, the cost between remove and repair is massive - remove is so much cheaper. View
Doug Jackson - 4 hours ago
Jo Telfer The only thing an assessment will do is identify that the government has to spend money to fix it to reduce the ris... View
News 3

Trevor Willis - 5 hours ago
Well said. It is always these minorities that think they can rule the world as long as someone else pays for it. View
Jenny Graves - 5 hours ago
I absolutely agree with you, Sam. Many years ago now I lived in the Sundown Village in Narrabundah. These damn birds took up... View
News 11