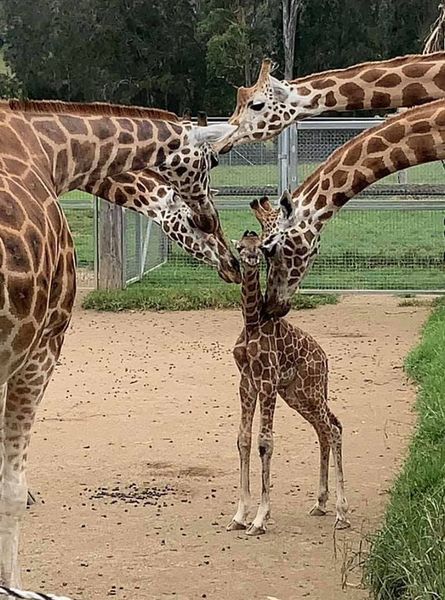 The new baby giraffe is welcomed to the clan at Mogo Wildlife Park. Photo: Supplied.

After a heartbreaking few weeks, the staff at Mogo Wildlife Park are celebrating a leggy new Australia Day delivery.

Tuli the giraffe became a first-time mum at about 10am on 26 January, giving birth in full view of visitors.

“It was a crowd of about 30 to 40 people,” said Zookeeper Chad Staples. “The funniest thing was the audible ‘hooray’ when the baby dropped.”

The Australia Day calf’s arrival came as a bit of surprise, given Tuli was thought to be due around the middle of February. However, with a 16-month gestation period, delivery a few weeks early poses no dramas.

“Maybe mum just got sick of it in the heat,” said Zookeeper Chad. “It was a lovely surprise. We saw a few signs and then, suddenly, there’s a hoof.

“It was a very quick labor and then the calf was up suckling perfectly.”

As well as the birth, lucky visitors got to witness the baby giraffe’s wobbly first steps.

Mother Tuli is the full sister of Binti, who welcomed calf Twiga in August 2020. Both the new calf born this week and Twiga share the same father, Ijuma.

The adorable new calf is now out in the giraffe field with the rest of Mogo’s tower of giraffes, all but two of which were born at the NSW South Coast wildlife park.

Mogo Wildlife Park is globally renowned for its successful animal breeding programs for endangered species, however that hasn’t made it immune to heartbreak.

The seven-year-old lioness gave birth to two healthy cubs, but a third cub was born dead and a fourth couldn’t be delivered naturally.

Zoo staff carried out an emergency caesarian to try to save the cub, however it had already died and caused severe internal rupturing to Zuri due to its size and positioning.

It was a terrible blow for Chad, who stepped up to play mum to the surviving two cubs, feeding them every two hours, day and night. Sadly, one of them, Moto, died from a sudden seizure in mid-January, leaving Chad to raise the last cub, Maji, alone.

“She’s doing really well now,” said Chad. “It was just a big adjustment for her. She was used to having the other cub there, but she’s quickly got used to it.

“Lots of love and attention fixes everything.” 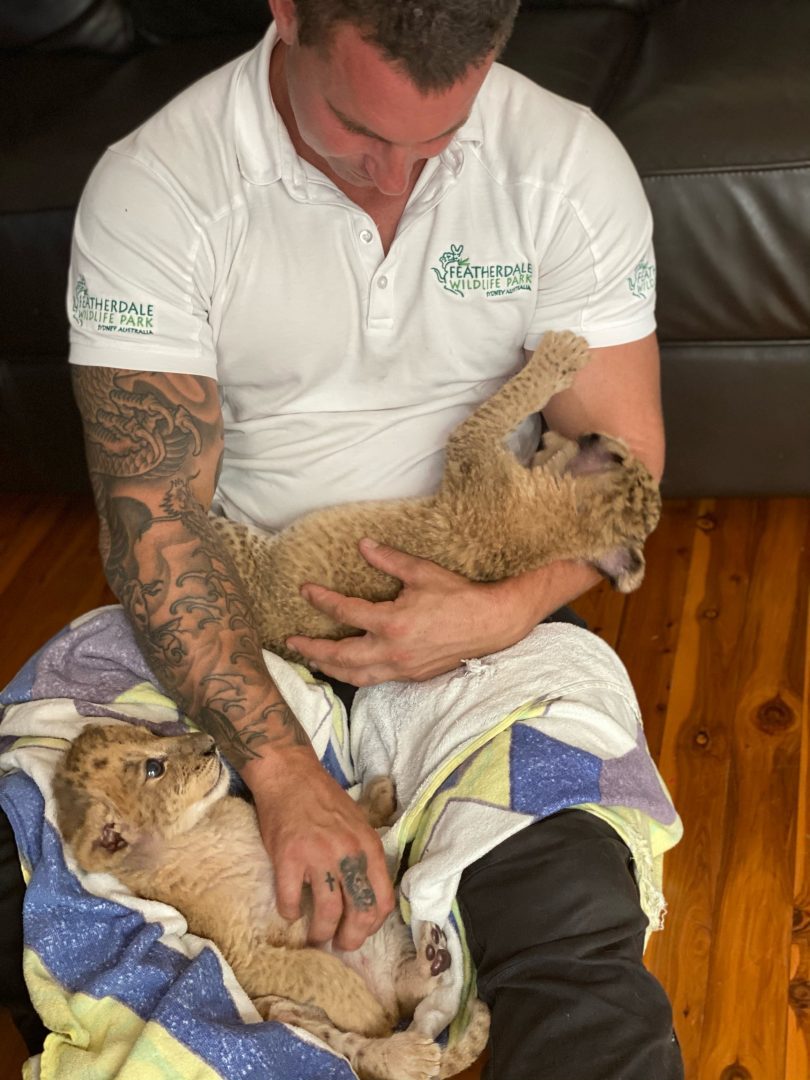 Zoo staff have yet to determine the sex of the new baby giraffe, or give it a name, but given its birthday date, it’s likely to be a little different to the other African names in the tower.

“It’s always nice to see a bit of a personality emerge before you give it a name so you can see if it matches,” said Chad. “(But) I think we will be having a more Australian name given its birthday.”