The little rated Southern Kings managed a draw, and many tries, against a Brumbies side that treated them with contempt tonight.

Brumbies need to extract their digits and start playing ball if they want to do something with the season.

UPDATE IN THE COLD LIGHT OF DAY: Foxsports tells the disappointing tale:

An after-the-siren try by No.8 Cornell du Preez has lifted the Southern Kings to a 28-all Super Rugby draw against the Brumbies at Canberra Stadium.

It was the second week in a row the Brumbies were outscored in the tries department by a South African side and the visitors will walk away from the game with a sense of victory.

They were the only team to claim the four-try bonus point as the Brumbies blew an early 13-point lead.

Oh how they’re enjoying this in the Republic 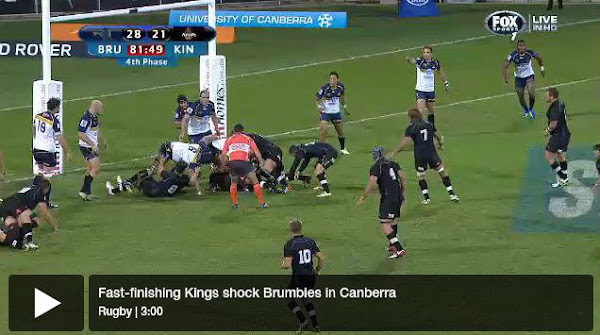 Did any of the Brumbies players take those short odds and bet on a loss or a draw?

The first half was scrappy to say the least, but the Brumbies looked like they were cruising around at half speed. I thought it would be a matter of putting the foot down and getting the job done.

The second half was very, very ordinary. The Kings were able to come steaming off their defensive line at speed, which combined with their size made breaking the line bloody difficult. The Brumbies passing was woeful; too many around the ankles, above the head, or well behind the receiver. Some strange decisions (who kicks for a penalty goal when you’re 5-10 metres out from your try line?) didn’t help matters.

The mouldy mandarins did a pretty good job of letting the game be played. They can’t be blamed for the loss.

Not sure what dph means about a horrible home crowd. Numbers? Noise? If it’s the former, it’s disappointing but not unusual for a Friday night game in Canberra. I know a few of the seats around me were empty, but their usual occupants live a couple of hours away and don’t usually make week night home games. If it’s the latter, maybe it’s where you sit?

And once again, the Brumbies home crowd, just horrible. You can understand why Brumbies management toyed with the idea of relocating to Melbourne.

I’ve been to two live games of football over the last two weeks. One at the MCG with over 80,000 and last night’s Brumbies match.

I think I want to relocate to Melbourne too.

As a Canberran without a semblance of interest in the Brumbies, but who is a Raiders member who goes to all games… I envy your “disappointing results” which end in draws, or in the case of last week, wins.

Is this “disappointing” rabble still top of the table?

Said it all JB, the Brumbies treated the Kings with contempt. The side starting XV picked reflected that as well.

And once again, the Brumbies home crowd, just horrible. You can understand why Brumbies management toyed with the idea of relocating to Melbourne.

Lorna Towers - 18 minutes ago
You couldn't afford all the meat you get at a real Brazilian BBQ. View
Jodie Sharples - 4 hours ago
Julie Warren this answers our questions from yesterday View
Amy Stewart - 13 hours ago
Mark Turner this is what we drove past… View
Opinion 17

Julie Macklin - 20 minutes ago
Dingo Dom Shanahan No, the bus interchange needs to be better incorporated into the centre of the city, not removed. More peo... View
Richard Orchard - 49 minutes ago
Retail space is always troublesome to rent out- it’s either that landlords want rents and leases, with personal guarantees,... View
chewy14 - 4 hours ago
JC, $60million a year for one stage of light rail that services a tiny minority of the population. With the government commit... View
News 63

@The_RiotACT @The_RiotACT
@CSIRO has proposed a new National Collections building to be constructed at Black Mountain Science and Innovation Park in Canberra at a cost of $70m https://t.co/74MuQPOFXA (39 minutes ago)

@The_RiotACT @The_RiotACT
Messages of condolence are flooding in for the family and friends of a Canberra man killed while watching the Finke Desert Race near Alice Springs on Monday https://t.co/sDzPaNDQvg (59 minutes ago)