“We can’t stop this fire”: Coast community plans for worst 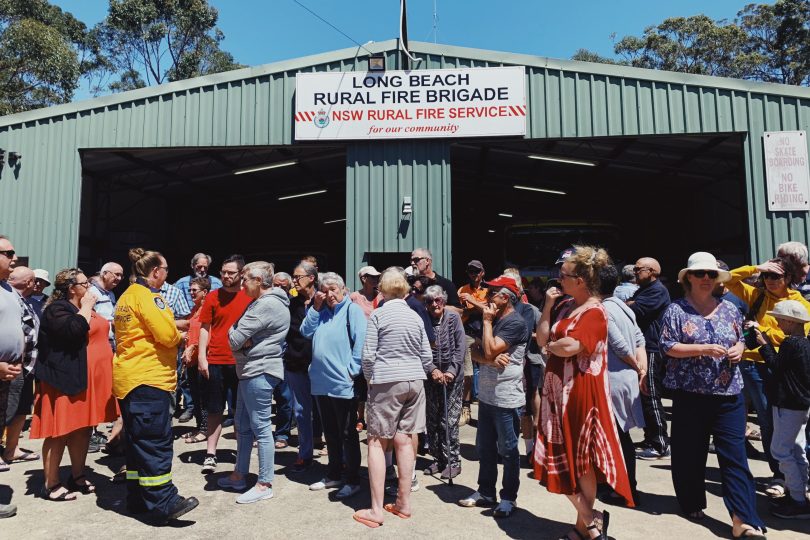 It was an anxious time at the Long Beach Rural Fire Brigade on Monday morning (2 December) as residents of northern Eurobodalla villages were told to prepare for the approaching Currowan fire.

Rural Fire Service Deputy Incident Controller Ken Hall was blunt. “We can’t stop this fire. It is so dry out in the bush, it will keep jumping over our control lines,” Mr Hall said. 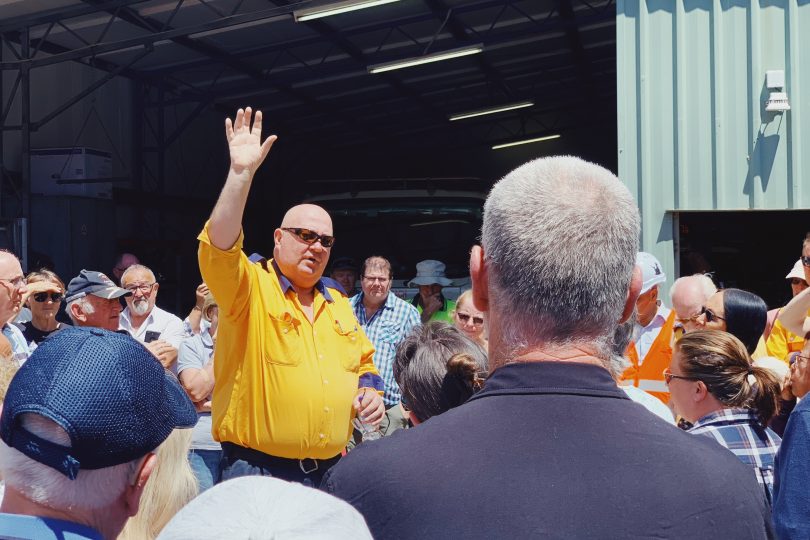 The Deputy Incident Controller of the fire Ken Hall.

“Our problem is, if we have a fire that kicks off out of the big one, it might come a bit further south and that will put more pressure on North Durras. I’m 70 to 80 per cent sure South Durras is safe at this point under these conditions.

“At Long Beach, this fire is a couple of days away from us, the winds are westerly which will take the fire north, that gives us some help, leaving us not so vulnerable. It also gives us some days to prepare.” 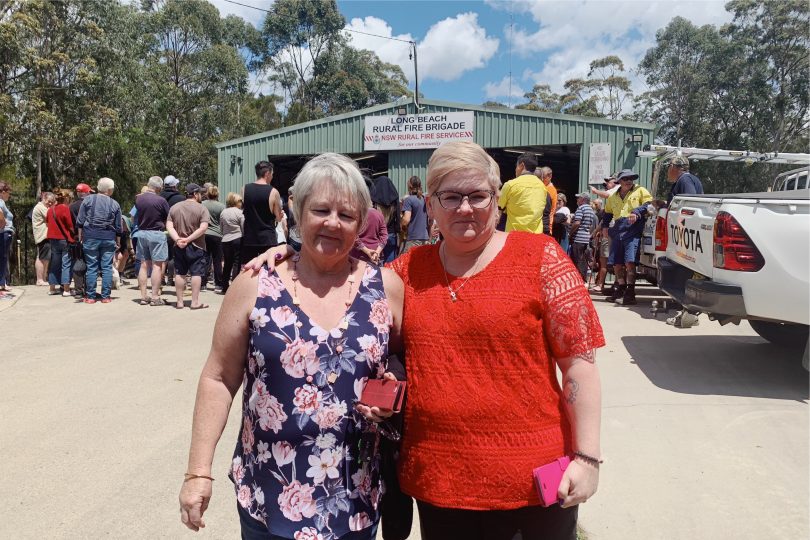 Early Childhood Director at Batemans Bay Pre School Bec Lester attended on behalf of her students families, to pass on the advice.

“They can’t stop it, it’s very scary, it won’t stop until we get rain,” Bec said.

Like many other residents, Bec and her mother Christine have a plan. This isn’t their first fire. They lived through the 2003 Canberra fires which they say were exactly like the Currowan fire – described as not too threatening in the few days leading up, until, “all of a sudden, in the middle of the day the sky turned black. We don’t want to be in Surfside when that happens”.

“When it gets to Long Beach we’re leaving with our pets, personal stuff and Esky that is ready to go,” she said. 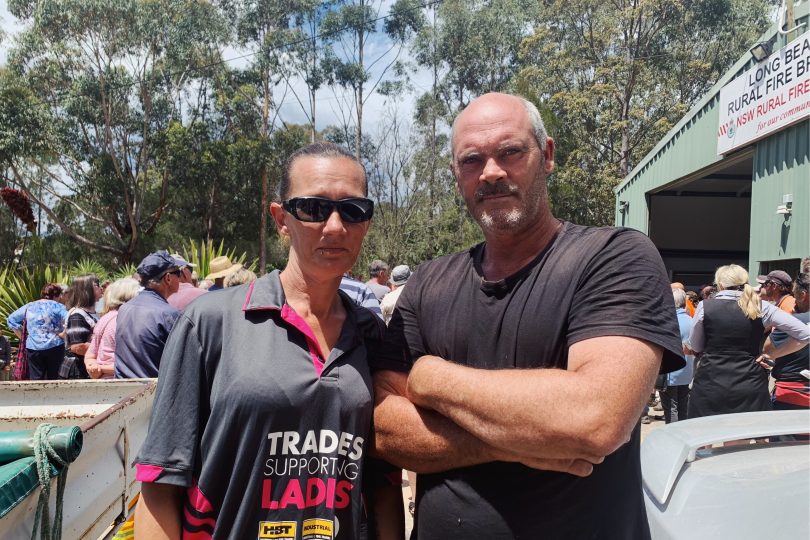 Mark Summers was quick to put his hand up to help the firefighters. Having fought in the Victorian fires, the feeling of panic is all too familiar.

“My wife owns Christie Coffee and we want to supply the fire brigade with as much coffee, Slurpees and food as they need,” he said. “We come from regional NSW where everyone looks after each other, this is just what you do.”

Christie’s plan is as soon as the fire is 5km away, she and Mark will stay while she sends her two children and pets into town. “Even though we rent, our home is everything to us; we have to stay and fight to keep it,” she said. 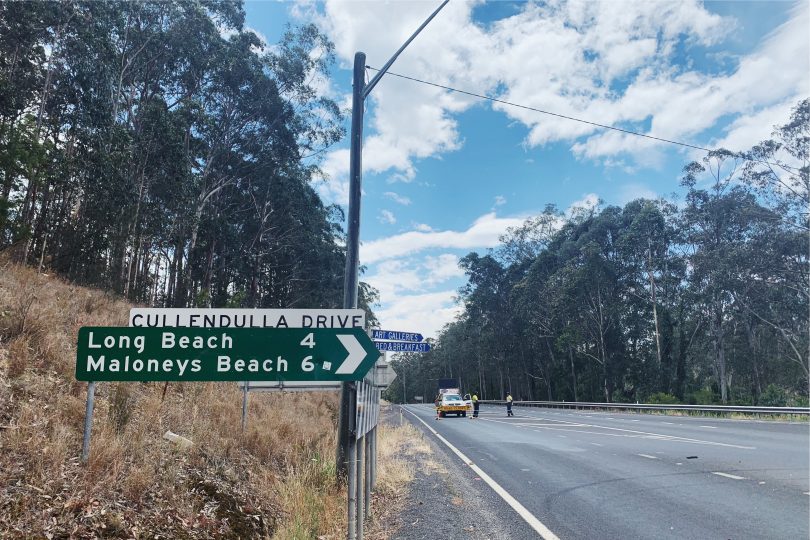 Like most coastal villages, Long Beach and Maloneys Beach are ‘one road out’ villages, so if everyone decides to leave in a panic at the last minute it could be catastrophic.

“The last place you want to be is in a car trying to drive out of fire,” Deputy Incident Controller Ken Hall said.

“If you leave it too late and you’re stuck at your house, make sure your house is right. If you don’t feel safe, leave now.”

Check the NSW Rural Fire Service website for updates and advice on preparing for fire.

Kristine Evans - 8 hours ago
Andrew Barr Then you need to let parents into schools before this happens. View
Christopher Marlowe - 11 hours ago
Jenna Vdv that's why HECS/HELP exists View
Rod Phillips - 11 hours ago
I'd like to see a bit more planning and less guessing all round! We've seen the impact of poor quarantine procedures through... View
Opinion 7

dolphin - 11 hours ago
its not hard jwinston, just look at the libs and you understand why. they are just too socially conservative for most of us.... View
HiddenDragon - 12 hours ago
"....The question now is making it work and be accessible to as many Canberrans as possible..." No, Zed, the question is and... View
ChrisinTurner - 15 hours ago
A contribution of less than 1% towards the LR network won't go far. However this amount would be against the advice of Infras... View
News 2

HiddenDragon - 12 hours ago
This monstrosity will entail major and protracted disruptions to traffic, which won't help what already looks like a struggli... View
News 6

bryansworld - 19 hours ago
However, this would create a signal for new suppliers to enter the market and undercut the original ones who are trying to go... View
keek - 20 hours ago
Great way to ensure the prices of these things all rise very sharply once suppliers know there is an easy 15 grand in it for... View
Food & Wine 2

Ol L - 21 hours ago
When COVID 19 blows over most will rush back overseas. Hope there’s no COVID 20 or they will all want to rush back here aga... View
Community 1

Ol L - 23 hours ago
Brindabella s? Would look like nothing recognisable as there hardly the Himalayas View
Food & Wine 1

The Senate has narrowly passed a bill to merge the Federal Circuit Court and Family Court of Australia into a...
What's On 0

Wajid Kakar, a 35-year-old Afghan national, has been charged with murder over the death of 34-year-old Michael Williams, as well...
Breaking 0

A 46-year-old Campbell woman has been charged with 23 fraud offences following the execution of a search warrant by ACT Policing this...

“Nothing short of a miracle” – Nelligen family saved by the winds

@The_RiotACT @The_RiotACT
Time for a move to the country? This eye-catching property in beautiful Mittagong has veggie gardens, a chook yard + plenty of space for the kids & pets https://t.co/EYBCG1UNb1 (2 hours ago)