Well, that was Christmas (You Are Here style)

Hi there. I’m Hadley, one of the co-producers of the You Are Here festival, and I’m just dropping by to debrief an event we put on yesterday called ‘Christmas Lane’. 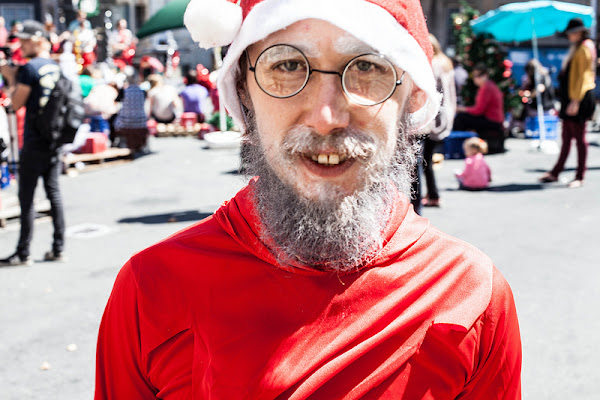 In 2012 You Are Here staged a Beach Party in Tocumwal Lane, behind Landspeed Records and Impact Comics. It was conceived by festival producer Yolande Norris as an alternative to Canberrans tearing off to the beach over a long weekend, and that we would bring the beach to Canberra. An amazing crew of designers, including our own George Rose, built palm trees, bought paddling pools, and filled a trash strewn alleyway with beach related ridiculousness. We had a gelato stand, April’s Caravan came along and six Canberra bands, ranging from surf rockers Space Party to not really that surf rockers Julia & The Deep Sea Sirens. They were then interspersed with the amazing Poncho Circus and beach themed dance troupes. We had a little over a thousand people join us over the course of the day, and the reaction was immensely positive. It was so exciting to take an alleyway/carpark, usually filled with trash, smashed trolleys, broken pallets and the faint smell of urine and turn it into a venue.

Fast forward to this Sunday past, where You Are Here descended upon Tocumwal Lane once more, this time for a Christmas Party. In a lot of ways, the Beach Party had a fairly logical concept behind it as Canberra has no beach, whereas Christmas Lane was absurd from the get go, and only got weirder.

Over six hours, among aforementioned smashed pallets and broken shopping trolleys, we planted plastic Christmas trees, inflatable snowmen, tinsel, empty presents and a collection of over sized Christmas themed swords. The acts ranged from amazing young people doing Bollywood dance to circus performers to the afrofunk of Nyash, the loveliness of Pocket Fox, the long melty jams of Fats Homicide and the distinctly Chrismassy surf rock of Space Party. There was a Santa fight and a PE beep test. 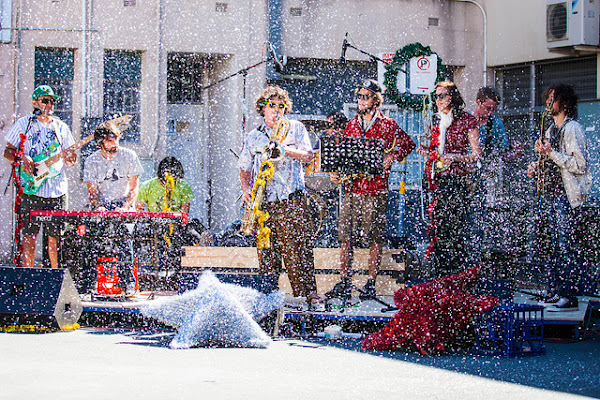 The audience filtered in and out throughout the day, enjoying vegan cupcakes, coconuts, vintage fashion and popcorn, along with the myriad, increasingly surreal entertainments. Our audience demographic ranged all over the place, and the tiny children were much less freaked out by Santa than the adults were.

It was a surreal event, that wobbled gloriously on the edge of disaster but never went all the way over. In a lot of ways, its not enough for us to hurl a venue in to an alleyway and have a bunch of bands. That’s all great, but You Are Here seeks to reflect the weirdness of Canberra back at itself, and Canberra is a really weird place! Weird in a great way, in an amazing way, but weird. Weird like a Christmas Party in an alley in March.

I know this write up is full of trigger words like vegan and vintage, but I can assure you that we are nothing if not inclusive, and that if you’d like to come and spend some time with us, we’d love to see you.

OldMan Wyatt - 10 hours ago
I have always preferred chocolate rather than seafood at Easter View
FishCo Fish Market - 12 hours ago
Thank you for your lovely feedback. Anna truly loves what she does and this will mean a lot to her. :)... View
Michelle Littlewood - 15 hours ago
FishCo Fish Market Thank you for your fantastic service and exceptional seafood. Anna was wonderful when placing my order, an... View
News 32