Were you there for the filming of Ned Kelly? It's been 50 years 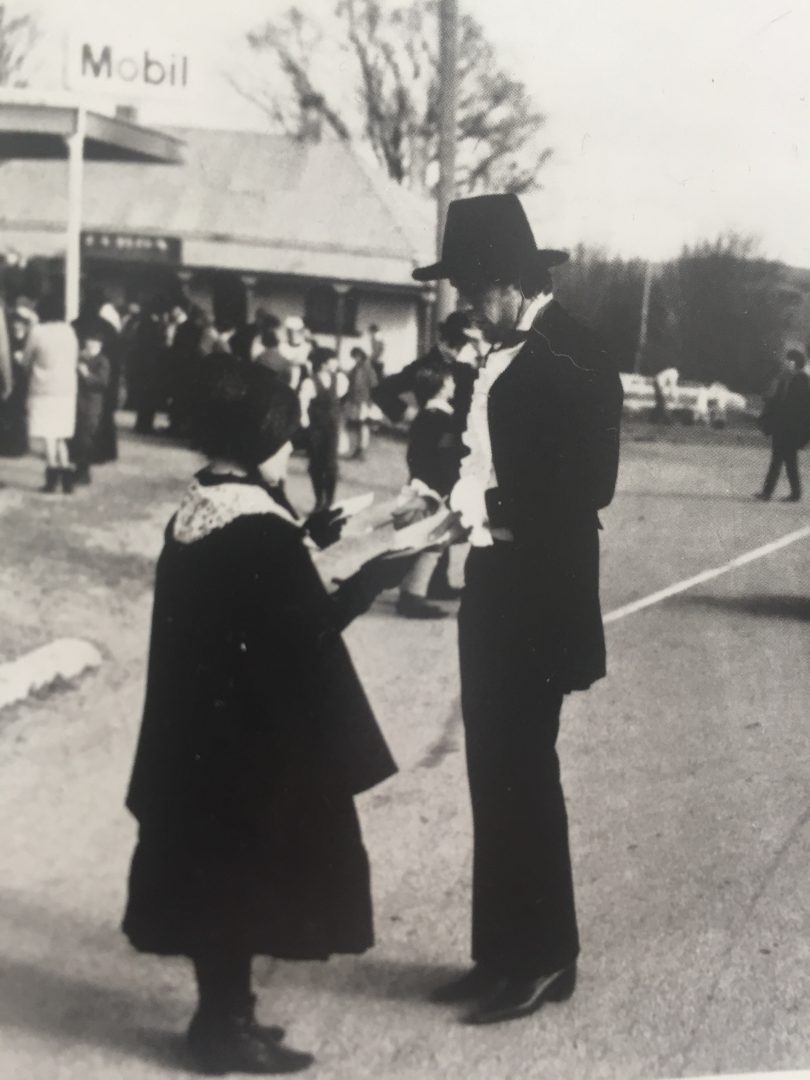 Mick Jagger as Ned Kelly with Suzie Harrison at the western end of Gibraltar St, Bungendore in 1969. Photo: Out of the Woodwork – The People and Place of Bungendore, Sonia Turner, Bungendore Community Foundation.

The Apollo 11. Woodstock. The Stonewall riots. The Beatles playing their final live performance. 1969 was full of landmark events. Even in Palerang, where Ned Kelly was filmed 50 years ago.

Some locals have souvenirs from The Rolling Stones’ frontman Mick Jagger walking the streets of Bungendore and Braidwood. Many more have memories from being extras in the movie.

When shooting of the movie began on 12 July 1969, English director Tony Richardson hoped to make a blockbuster based on one of Ned Kelly’s letters to gain public sympathy for the bushranger. Richardson also hoped to showcase Jagger’s acting skills; however, the movie, and Jagger’s acting career didn’t take off.

While Ned Kelly wasn’t one of the notable bushrangers of the area, it was deemed the perfect location for the 10 weeks it took to shoot the film. Much of the movie was filmed in Braidwood, with scenes also shot in Hoskinstown, Captains Flat and Bungendore.

One of the many extras in the film was Bungendore resident Sally Osborne, who told Region Media the filming helped invigorate the town.

“It was quite significant for the whole area,” Sally recalls.

“We were all terribly keen to get involved and initially thought we’d just be groupies and hang around, but then we found we could all have roles in the film, and that was great fun.

“They also wanted horses and people who could ride horses. Once we realised that, we had a great old time, renting our horses and working on the film.”

Sally said it was particularly challenging to film the siege of Glenrowan, which went right through a cold, wintery night.

“I recall there was a bit of a need for liquid refreshments for that scene, but they seemed to get it done.”

Several tonnes of dirt were laid over the main streets of Bungendore and Braidwood to recreate many scenes in the movie.

Raynolds was an extra in two scenes from the movie and recalls getting the not-so Hollywood sum of $19 a day for his work.

Raynolds recalls Mick Jagger coming into the hotel for a couple of green ginger wines, but he didn’t have a lot to do with the crew apart from when he was required for filming.

“Mick had his girlfriend Marianne Faithful with him and they stayed over at Mulloon on Hazeldell Road, just out of town,” Raynolds said.

“It was like a big carnival and there were heaps of local people involved. It seems like a couple of years ago now, but the film wasn’t all that memorable anyway.”

To celebrate the 50th anniversary of the making of the film, Ned Kelly will be screened at the Bungendore Bowling Club this Friday night.

Bungendore resident and sculptor Keith Bender has helped bring the film to Bungendore and said the film is part of a concept known as ‘town teams’ which are pop-up events held in local communities.

Mr Bender said they have received support from the Queanbeyan-Palerang Regional Council and even from a local who loaned their DVD player to screen the movie which will be projected on to a big screen. Sound equipment is on loan from another supporter of the event.

Sally Osborne, another long-term resident of Bungendore was also part of the film. She will speak for about 15 minutes before the movie to present her recollections from 50 years ago.

Legend has it that the original head-piece worn by Ned Kelly is still missing, presumed stolen. The remaining body armour worn by Jagger (with his initials ‘MJ’ inscribed inside) is on display at the Queanbeyan Library.

A prize will be awarded at the screening for the best Ned Kelly mask. Who knows? That missing head-piece may show itself after all.

If you’re looking for an alternative to watching the Canberra Raiders, Ned Kelly will be on the big screen at the Bungendore Bowling Club at 6:45 pm, Friday, 27 September. It’s an outdoor screening so bring your camp chair or blanket. If it’s raining, the event will move to the Community Hall. Tickets are available online or at the door at a cost of a $5 donation to the Rural Fire Service.

Do you have memories of the filming of Ned Kelly? If so, share them in the comments below.

My dad made it rain every time they needed it using his fire truck with water tank on the back….. dressed in his batters

I have a photo somewhere of me sitting on a troopers horse in Braidwood.

I have a photo somewhere of me sitting on one of the troopers horses in Braidwood.

Never saw the movie, but I’m told Jagger’s portrayal of Kelly would have been a embarrassment to the outlaw. Poetic justice really.

I loved the movie and thought that Mick did a great job as Ned. The soundtrack was pretty good too.

Well you weren’t there that’s for sure

I almost ended up in the movie … driving my MGB around the corner into Braidwood early one morning on my way to the coast. Just past Torpys they were filming a scene with oxen pulling a dray not thinking anyone would be driving through at that time. An MGB may not have been needed as an added extra in the movie. I do remember Braidwoods main street being covered in dirt with many shopfronts with old worlde facades to recreate the period. The former commercial bank at the bottom of Gibralter Street in Bungendore became the scene for the Jerilderie Bank holdup … I believe.

I used to live in the old Commercial Bank. Beautiful old building.

Virginia … the one in Bungers? Lovely buildings in the back yard …

The boys who rented it started a recording studio in the stable out the back. We had some great parties in that house. Stunning place. All the joinery is Australian red cedar.

The absolute worst Ned Kelly movie ever and they should have actually hung Mick Jagger for such bad acting.

I wasn’t even in Australia 50 yrs ago. Still living at home while saving to travel.

Drove through at the time , all main street covered in granite

Unfortunately I saw the movie… love Mick and “Stones”… this was an abomination at it’s worst…Ned with a “cockney,pommy, piss ass accent”… give me a break…

I shook his hand on the set

The only thing I remember about Ned Kelly was that miserable night in 1971 watching it at the Sundown Drive-In on a freezing winter night during torrential rain. An awful night and an awful movie. As my father kept the wipers going I thought “He moved us from the beaches of the North Coast for this?”

My father was an extra in the film. The horse trainer and a few of the horses stayed with us at Carwoola.
Dad had a pair of these from the Glenrowan Pub set.

Denise Smith , RoseMarie Moretto-Carlsson, we were at the Royal with the cast & crew (no Jagger) singing with them

Vicki Smith yes we did.

He and other cast members used to have a table reserved for them in the Mum and Dad Cafe in Braidwood. My grandmother got Mick’s signature for us, but sadly it was lent to a teenage friend of ours and we never saw it again!!

Julie Schneider Yes he couldn’t act to save his life!! A case of “stick to your day job”

Yes I was there as an extra. My mother Zadie was the wardrobe assistant who meet MIck jagger, not to mention my sister who got to measure Mick up for his costume!! Yes it was all very exciting as a kid of 11 to take part in the movie.

Chris Crotty we meet a lot of famous people. I remember meeting Marianne faithful’s mum. We used to huddle together in one of the caravans that were on location because it was so cold. I remember her as being really lovely to me. Also met Dianne Craig – she had just finished acting school and got the part of Ned’s sister. I remember her also as being really lovely to me. Mum off course got to meet everyone. She loved her job as you can imagine and was paid very well for those days.

Zadie was working with the late Ron Williams in the wardrobe department -he dressed my girlfriend and I. (I later worked with Ron in 1976 on The Sullivans in Melbourne. He was a very funny man and had a great eye for costumes.

Ross Hamilton Zadie has long passed so it is fantastic that you remember her. She had such a good time working on the movie mum was full of energy and would give anything a go. I don’t remember Ron but I do remember Kate, the wardrobe mistress from the uk.

Yes we caught the train from Central to Tarago then hitch-hiked to Braidwood and went to the Production Office on Wallace Street and got work as extras. Stayed at Torpy’s Caravan Park. It was freezing cold at night but warm during the days – got dressed in different period costume every day and got paid for it! A wonderful life experience- great memories!

Yes!! We went out there for one of the filming days….Maryanne Faithful was with Mick Jagger….we saw her. But unfortunately she left soon after due to illness.

My best friends father and his brother are in this movie, Mick jagger stayed with them while shooting the movie.

Kathy Slusser was this what you did?

Jessica Slusser Yes Jess that is exactly what I did