What I learned at the Youth Homelessness Matters Day event 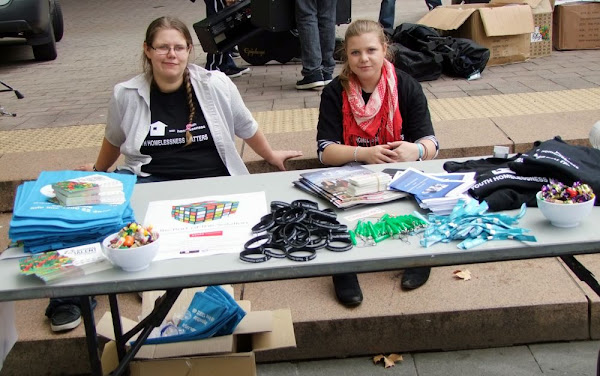 I went down at lunch to see the Youth Homelessness Matters Day event at Garema Place for myself. It was like all of the usual Garema Place events- bands that do Blink 182 and Greenday covers; a coffee van; some BBQ sausages; as well as stalls from organisations relevant to this issue.

Once there, I had a chat to the head of the Youth Coalition of the ACT, Emma Robertson, to learn a little more about the event, and youth homelessness in general.

She told me that the main purpose of the event was to raise awareness within the general public. As the ACT is more affluent than other states, youth homelessness tends to be an issue that most don’t realise exists. When they do realise that it exists, people assume that the only solution is to open up some shelters. Youth homelessness goes a lot deeper than that. Simply putting a stable roof over their heads does not help to tackles the issues that led to homelessness; such as family disputes, disengagement from education, a lack of income, as well as many other individual issues that can lead to homelessness.

Emma also spoke to me about how the three classifications the Youth Coalition applies to homelessness: primary, secondary and tertiary. Primary refers to youths that are sleeping on the streets and in bus stops. Secondary refers to youths that don’t have a stable home, and tend to be moving every few days. Tertiary is when youths have a roof over their head, but they are dealing with issues such as overcrowded accommodation, no running water, or violence, to name a few. As Emma says “homelessness is not rooflessness.”

The main category of youth homelessness in the ACT is secondary, which means that it is often out of the public eye. One of the aims of the Youth Coalition is make people aware of it, and aware that we all need to be part of the solution. For example, private renters could consider renting out to younger people, employers could begin hiring more young people, and we could start to hold government accountable.

The image of Rubik’s Cube, the symbol of YHMD, is fittingly used to represent that all pieces need to work together to solve the puzzle.

Did anyone else go to the YHMD event today? If yes, what did you think of it? 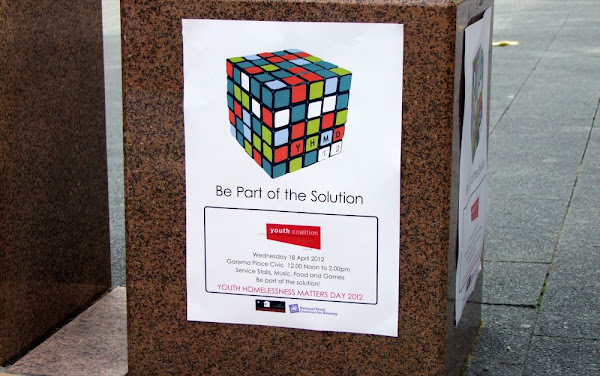 No, I wish I could’ve gone; it sounds like there was a lot to learn.

It says here that it’s the right way around.

But I know what you mean, tertiary does sound like it’s more extreme level.

Really? Because that’s how it was explained to me. It was long day for all though, wires could have been crossed somewhere.

Good piece, but you have your primary and tertiary back to front

Heather Purvis - 7 hours ago
It can also depend on what subjects/electives are being offered/are available to the students - those seeking specific subjec... View
Connie Kaltoum - 9 hours ago
Hmmm. But I believe they do choose to contribute a fair bit out of their pocket ..... View
Jackie Fuller - 9 hours ago
Wealthy......some ppl are "far" from Wealthy. We just want better for our kids!...and will make sacrifice in other places Pri... View
News 26

Darcy Ryan - 8 hours ago
Meanwhile business owners and landlords are looking to abandon Canberra due to scandalous high rates and land taxes. Cmon lab... View
Eddie Majcic - 10 hours ago
Harm and abuse against someone's will, whether it be physical or emotional or something else is well covered in current legis... View
Russell Nankervis - 10 hours ago
I have seen no evidence of that from safe schools. View
Sport 9

Louise Hoffmann - 8 hours ago
Grew up playing softball with Lisa and Katrina. They were both very talented at what ever sports they played xx... View
Madeleine Powell - 9 hours ago
Of course. It would very un-powell not to haha View
Nicole Harrow - 10 hours ago
Carolyn Brassil thanks Cazza View
News 6

Guy Randell - 1 day ago
Peter Chamberlain hey Pete, I thought the stands were able to be retractable at AIS. Pity would be a Cracking venue.... View
Community 6

The $500 million Canberra Hospital expansion project that will deliver the new eight-storey emergency, surgical and critical healthcare building is...
Opinion 26

@The_RiotACT @The_RiotACT
Meet Stevie, a super enthusiastic pooch who is ready to step out of the @rspcaact shelter and into a new forever home https://t.co/S8QW1yHa7M (10 hours ago)

@The_RiotACT @The_RiotACT
Looking to upsize? This corner-block property with four bedrooms + spectacular views could be the ideal place to call home https://t.co/UctSZNgD5B (11 hours ago)