Experts in buying, selling & renting
Your property, your future
9 March 2021 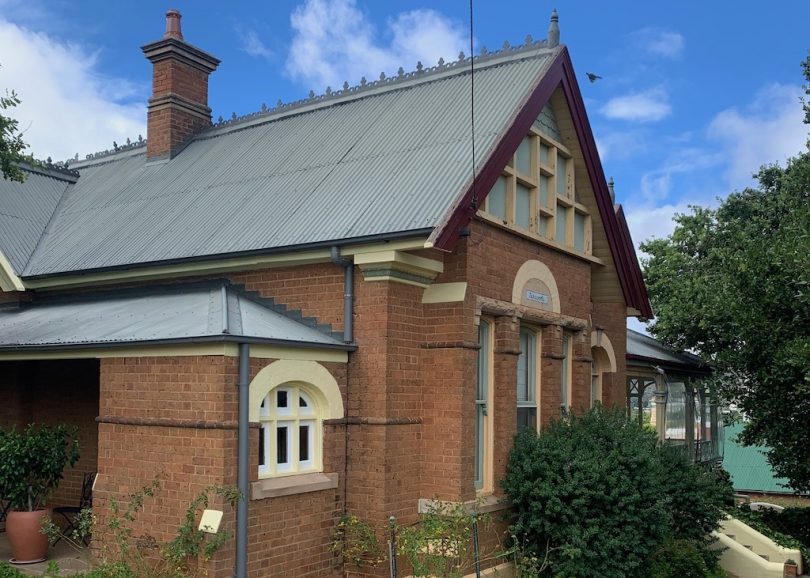 ‘Tarcoola’ from the corner of Cowper Street and Verner Street in Goulburn. Photo: Supplied.

After Michael and Fiona Hudson sold their farm at Gunning in 1994, they bought an outstanding Manfred home surrounded by enormous English elms and oaks in Goulburn.

Architect Edmund Cooper Manfred’s swift rise during the wool and gold boom of the 1880s meant lots of money to splash on his elaborately designed, prominent civic buildings and lavish residences. Of all these grand homes, the one that captured the heart of the Hudsons was at 85 Verner Street, overlooking the city.

‘Tarcoola’ is worthy of its pinnacle position in Goulburn.

To this day, the Hudsons marvel at the home’s stability and intact brickwork.

“I read the specifications, all in copperplate handwriting, of how this house was built,” says Michael. “I totally understand it.”

Over at least five pages, the handwritten instructions begin by stipulating “all materials shall be of the best description”. The instructions include painting the home’s interior and exterior – and which sections were to have three coats or two – the areas needing French polish, oil or polishing with beeswax and turps.

The verandah needed fresh oil, and all interior floors had to be scrubbed before painting. Plastering required one part fresh lime mixed with two parts clean, sharp sand, mixed with plenty of long cow hair. Joiners were instructed on the thickness of doors, bolts and for the front door, knob, knocker and letter flap. Brickwork, stonework and foundations were covered in similar detail.

“This was the first home in Goulburn that had a damp course, believe it or not,” says Michael. “It’s lead, in perfect condition. There is not one structural crack in the house and I think it is the lime mortar and probably the way it was made – the internals are done with Oregon, cedar, sugar pine.

“It is a tribute to read just how methodical and perfect they were when they built things.”

Cashed up after their farm’s sale, Michael and Fiona paid $249,000, a large amount at the time, yet Michael didn’t put much significance in the name, ‘Tarcoola’.

Fiona said the name should stay. So Michael looked into its origins, and six months later, while awaiting an interview with a horse trainer in Sydney, he noticed among the Melbourne Cup winners on the wall, Tarcoola, in 1893 – the year his home was built.

Subsequent enquiries with Victorian racing officials led him to believe their new home’s original owner, Mr Conolly, had won a windfall when Tarcoola won the cup. 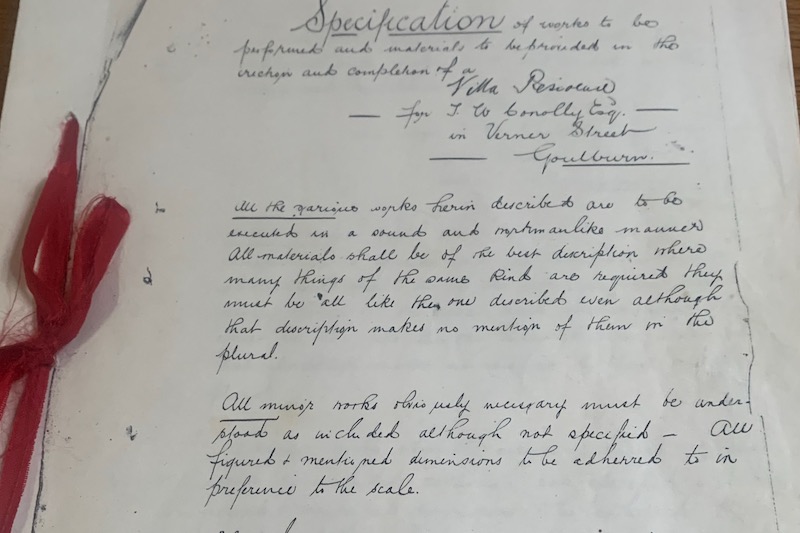 Original handwritten instructions on how to maintain the ‘Tarcoola’ home. Photo: Supplied.

Featuring fine brick and stone work, elegant window arching and ornate roof detailing, large sections of the home are hidden by seven elms and three oaks. Although on a large 1890-square-metre block, the elms are close to the home, and by the time the Hudsons had arrived, the trees’ roots had destroyed Tarcoola’s clay-pipe plumbing.

In their first month there, the plumbing failed. A month later, the electricity cut out.

“It took us months and substantial cash flow to rewire the house, redo the plumbing, and redo the bathroom,” says Michael.

At the rear of the residence a sewerage main easement became blocked. A deluge formed, backed up and filled their laundry with sewage. Plumber Robert Weaver unravelled the problems and replaced their clay pipes.

At least some forward-planning had gone into the trees’ eventual massive canopy. The sun rises each morning unimpeded by trees, bathing the easterly verandahs of Tarcoola in soft sunlight. The verandah’s rotting floorboards were replaced after their youngest son fell through the old ones when the Hudsons first moved there.

“I grew up in a tough area in Warwick Farm, Sydney,” says Michael. “Dad’s a horse trainer and he built our house in the 1960s. The home was rambling, full of stables, full of race horses, full of everything. So ‘Tarcoola’ is like living in [UK country house] Blenheim Palace.”

An internal hidden staircase behind a door leads to the enormous attic, which reveals Oregon and cedar beams in pristine condition.

“You would think after 130 years you would see bits of wear and tear, but there is nothing – it is almost like it was put in yesterday,” says Michael. 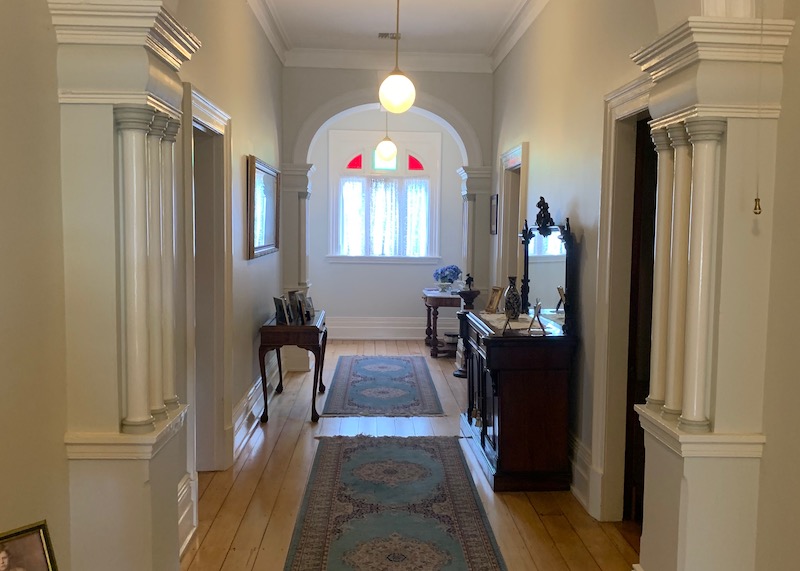 The staircase opens onto the roof, on which a large box gutter has doubled as a lofty lookout. In summer, Michael and his sons would carry a table and chairs to sit there to watch the cricket at Eastgrove. They could see the cathedrals, Rocky Hill and out across the airport.

Now the children have left, but Michael and Fiona are there to stay.

“We have grown to love the place,” he says. “We appreciate it. I just love the high ceilings and the large rooms – it is just a charming old place.”