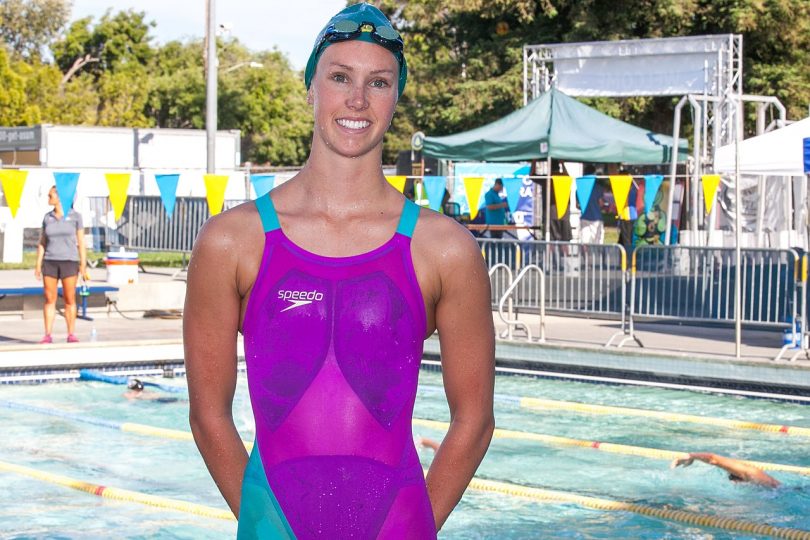 The star of the Australian swimming trials Emma McKeon in 2016. Photo: Wikipedia.

I grew up looking forward to each Olympic Games, sweated on the highlights package before the live 24/7 TV coverage became the norm and shared in the pride Australia felt about its medal performance and participation in the world’s greatest sporting pageant.

For a while there, I could recite athletics and swimming medal winners, despaired at the 1976 Montreal debacle (oh, Steve and Raelene), and rejoiced in the execution and spirit of the Sydney Games.

Come Tokyo, I’ll probably still tune in, cheer on our champions and applaud those who may not take home a medal but nonetheless give their all.

But not with the same enthusiasm because in recent years the gloss has come off the Games amid doping scandals and as the era of the professional athlete entrenched itself. It used to be that three-time Olympians were the exception. Now many are heading to their fourth Olympiad, like swimmers Cate Campbell and Emily Seebohm.

Which brings me poolside, where the shadow of body shaming, abuse and eating disorders hung over the recent Olympic trials after explosive claims from Madeline Groves who pulled out of the event.

It’s an interesting exercise to compare the bodies of athletes from the 1960s and 70s to the sculptured forms of today.

READ ALSO: The Air Disaster Memorial has a dark history with vehicles

Today, fitness is not enough, and of course, to compete at world level, athletes have always trained beyond that simple level of proficiency, but the methods and strategies employed these days based on the best sports science money can buy can be torturous experiences, particularly for women, or the girls they are when starting out on the training treadmill.

Is it just me, or is anybody else disturbed by the images of our female swimmers emerging from the water with great hulking shoulders and not a sliver of body fat?

They’re sleek swimming machines built to scythe through the water with the least resistance. Special diets, weight programs, kilometre after kilometre of black line fever, surgeries and a war with the callipers.

And much of this will happen during the key development years after puberty when young people are at their most vulnerable.

The impacts of modern training methods fall disproportionately on females whose careers, at least in swimming and gymnastics, start earlier than their male counterparts.

What price is being paid for success?

The lid has been blown on the abusive practices of some coaches, the eating disorders that stem directly from the body shaming and restrictive diets, and the sexual innuendos flung around the pool or gym. But what of the long term health impacts, the disruption to menstrual cycles and the possible fertility issues as women devote their formative and most productive years to the pursuit of gold?

After Montreal in 1976, where Australia won zero gold, one silver and four bronze (our worst medal-winning performance since Berlin in 1936), the nation collectively said never again, so we accept a whatever it takes approach.

But I can’t help feeling we are asking too much of our young people and that the human spirit that the Games were meant to honour and inspire has been squeezed dry, leaving only a robotic body going through the motions, ever so perfectly.

Peter Simpson - 25 minutes ago
Signage on the building now way should they get away with that the surface condition diabolical for a person with disability... View
News 25

whatwik - 37 minutes ago
Some sympathy for the non serial transgressors here - a few months back in momentarily exceeding 40 kph while moving through... View
Ian_Red - 43 minutes ago
The ten speed cameras that raise the most revenue should have the posted speed for that location reviewed. I do not regard Ca... View
whatwik - 60 minutes ago
Roadwork protocols (and enforcement of the responsibilities of contractors) require urgent attention throughout the country.... View
News 4

Mark Maddock - 2 hours ago
"He did complain of feeling a little fatigued but the deterioration happened suddenly is my understanding," Dr Chant said. Mr... View
Opinion 3

Ailsa Turrell - 2 hours ago
I agree - we have higher rates of vaccination here despite it being so difficult to get initially and I have not met anyone w... View
Ed N Joanne Towner - 3 hours ago
Juz Hawke Agreed. We are also fortunate to have a bit of distance from Sydney to make Covid control a bit easier. View
Juz Hawke - 3 hours ago
Definitely agree that Canberrans are mostly very compliant with the Covid rules, and very grateful we are largely unscathed.... View
Food & Wine 7

Sharon Harrison - 8 hours ago
Ris McEldo little Willy was such a star in the classroom but he grew too fast! 🥰 🐑... View
Breaking 5

Milestone Entertainment - 11 hours ago
Is it really that hard to see beyond self and consider the greater good? At this point we all know the rules...at infinituim.... View
show more show less
*Results are based on activity within last 7 days

A Canberra homeless man has been left traumatised and unable to sleep after his dog was impounded by Domestic Animal...
Community 95

A disabled parking spot outside Mawson Domino's pizza is the latest spark in an ongoing debate about roads and parking...
Community 95

@The_RiotACT @The_RiotACT
ANU has announced a new scholarship program in a bid to attract potential students put off by the cost of living away from home or moving to a new city @ANUmedia https://t.co/W7DFA7qWo2 (12 minutes ago)

@The_RiotACT @The_RiotACT
Deane Richard Roach, who gained infamy for defecating in a pool last year, will remain behind bars until at least next year after he was sentenced yesterday https://t.co/UK05OS0snQ (1 hour ago)

@The_RiotACT @The_RiotACT
Have you hit a #pothole? You have plenty of friends as the wet weather wreaks havoc on the capital's roads https://t.co/SdXv0PSAil (1 hour ago)