What spider is this? 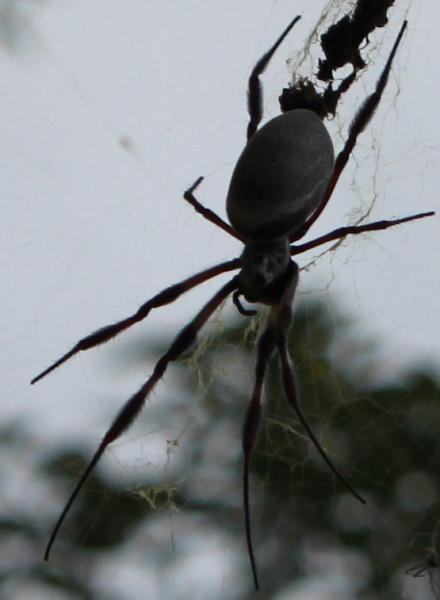 Tags ask riotact spiders what spider is this

15 Responses to What spider is this?
Filter
Showing only Website comments

I looked them up and found they only live one season, it made me quite sad.

Ahhh, people in Canberra are always mistaking this little fella for a Golden Orb. It is, in fact, a rock spider. They are usually found in and around play equipment or children’s toys. They are quite dangerous and should not be approached. Hope this helps.

Sneakers has helpfully sent in this link:

If you get bitten by one of these you will immediately go blind and your legs will wither away within a week. Death comes slowly, however, usually not occuring until the victim is in their late 60s or 70s.

And strangely, the first born sons of your children with be born with red hair.

I’m sure I read this on wikipaedia somewhere.

(At least, that’s how my grandfather told it).

If you get bitten by one of these you will immediately go blind and your legs will wither away within a week. Death comes slowly, however, usually not occuring until the victim is in their late 60s or 70s.

And strangely, the first born sons of your children with be born with red hair.

I’m sure I read this on wikipaedia somewhere.

Yep that’s a Golden Orb. Like everyone else has said they are harmless unless you antagonise them. There should also be a smaller male spider living in the web or nearby that goes around and cleans up the web. Very interesting dynamic nature has going on there. The webs are very strong as they eat fairly large flying insects. Great to watch them eat. Very educational for the kids to watch as well. Nature at its best.

I’m actually surprised that you now get them that far south. I’d never seen one when I was living in Canberra for close to 30 years. In Queensland they are quite common. The further north you go the bigger they get. In Cairns they are that big I swear they eat small children.

We have a lot of them around Brisbane at the moment because of the large quantities of rain we have had lately.

How this young lady can be a nightmare in the making I’m not sure. I suspect the person making the comments might be a little scared of spiders. When I first moved to QLD I was a little uneasy with our 8 legged friends but since there are so many of them here I thought it best to just work through the phobia. The size of the Huntsmen here is just amazing (I’ve had one bigger than a dinner plate). Now days I just remove them from the house and let them enjoy their time in the garden.

The Geckos I have living in the house keep the inside spider numbers down. I’ve seen some awesome fights between massive Huntsman and Geckos. Geckos win every time. They’ll eat everything but the legs.

boris. they all are. lovely. don’t eat spiders, even if you are bear grills.

This spider is a nightmare in the making.

I have one called Greg that loves eating bees.

Well tell him to stop it. Bees are having a tough time of it. Get him interested in european wasps instead.

She grows so quickly, I see a difference weekly.

see what it has been eating and how much it’s grown.

Any of your neighbour’s cats gone missing…?

I have one called Greg that loves eating bees.

That’s a very nice spider, that’s what that is…

Thanks guys, I have two of these building webs you wouldn’t believe.

All the neighbourhood kids come and check it out and see what it has been eating and how much it’s grown.

We are quite attached to it now.

It’s a golden orb weaver. I’ve got an absolute cracker of one at my place with a web that’s about a metre across. She grows so quickly, I see a difference weekly. She won’t harm you if you leave her alone and isn’t dangerous. She will likely die over winter if she’s not well sheltered. I’m loving watching mine and she’s now a favourite for kids to check out when they come to visit.

Pretty sure it’s a type of Orb Weaver – looks a bit like a member of the widow family but harmless. That being said I’m not a spider enthusiast (Arachnaphile?), so it’s probably best you don’t touch or eat it.