What will be left in the old Civic? 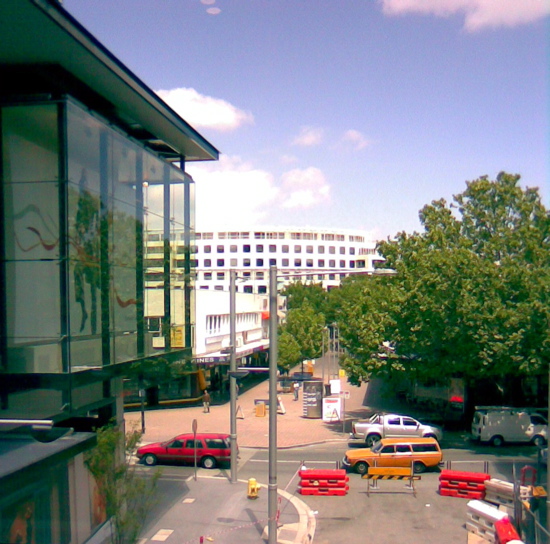 I know it’s more than a little late in the piece to have misgivings, but I’d just like to ask now that it’s too late: What the hell are they doing to Civic?

The expansion of the Canberra Centre is big, I would suggest that those downplaying its size haven’t walked the length of both levels. While it’s funny to hear that the roof leaks, it seems likely these teething problems will eventually be fixed. Things in this hulking arcology do seem to largely be bigger and better than their competitors in Garema Place, City Walk and the Melbourne and Sydney buildings. Will I go to Dymocks when the enourmous Borders is just around the corner? Will I go to the ever crappier Greater Union when the 8-screen Dendy Cinema is just upstairs?

Probably not, and I actually worry about these things.

So what’s the problem?

Well I am not an urban planner. But I do know that most thinking on urban planning, and my own experience, suggests that mixed use creates the most pleasant urban environment. That’s a mixture of housing, offices, retail, bars, restaurants and other entertainments. The most pleasant cities tend to have fallen on this model through historical accident.

The Canberra Centre’s expansion seems to be directly contrary to this. It’s a step back in time to dormitory suburbs feeding the retail zone and it’s entirely reliant on cars to move the people from one to the other and back.

To be honest though the thing that bugs me the most is the way the centre is going to suck the life out of the public domain.

Let’s not overly romanticise Civic’s past. It’s very rarely functioned as much of a city centre. But at it’s best it is still a place where people can see, and be seen, in public.

You can stage a protest, I can report it, passers by can see it and join in if they agree (or disagree).

Within the sterilised and air-conditoned centre there is no public discourse. As RiotACT discovered you can’t even get permission to take photographs inside the centre. You can’t even be refused permission and get a reason why, you just get run around and blanked.

It’s too late now. But I think in 20 years time people will look back at Section 84 and view it as one of the biggest failures of planning in Canberra’s very poor history since the abolition of the NCDC.

39 Responses to What will be left in the old Civic?
Filter
Showing only Website comments

There is a Visotors’ centre on northbourne avenue.

So the solution to the lack of hustle is to drain the pond completely?

I can’t say i’ve ever used the information desk anywhere and I doubt (but would be open to being pleasantly surprised) that the Canberra Centre desk is going to show me the way to Landspeed Records.

suck the life out of Garema Pl and the city?
sorry to say, but there has never been great street shopping like syd and melb CBDs. it’s the nature of the city that we live in.
do you see the ACT government funding an information centre in the ciy either? that’s what other capital cities all over the world do but not here in Canberra. the Canberra Centre pays for the only information desk in the city.

Yeah that document as i said – is more geared at Ip rights of a photographer and copyrighting their works.

I give copies to all my clients before signing contracts.

Interesting document Danman, the only bit relevant to the argument above would appear to be:
“Be aware though, that the owner of a property may impose restrictions regarding entry onto the property. It may sometimes be the case, as with photographs of people, that certain unauthorised uses of a photograph of a particular building may raise issues under other laws, such as trade
practices legislation.”

also if your into IP rights ain regards to a building – and ownership of IP in general in regard to photography – this is a good link.

Dammit, I must have screwed up the link (sorry Kerces, I tried). Here it is in plain text:
http://4020.net/unposed/photorights.shtml

Regarding photo attempts, “here’s a great page for amateur and professional photogs looking to ply their trade around town.

In a nutshell, owners of private property can ask you not to take photos. The only way they can enforce this is by asking you to leave. They can’t take your camera, demand you delete photos or assault you in any way.

Kerces, I suggest you shave your beard before any further photography attempts.

they have no special legal priveleges.

That’s not true. If it is enclosed land, and if you leave a gate open, they can require you to give them your name and residential address. Or shoot you, if you’ve got a beard.

yes kerces – therefore it is a public place.

they have no special legal priveleges.

if you take a photo in there what is the ONLY thing they can do to you ?

ask you to leave.

if they try and take your camera or delete photos – by taking your camera off you – i think the legal ground shifts to them committing a crime against you.

you dont need permission to take photos in the canberra centre.

it is a public place.

No it’s not, it’s privately owned by the QIC. They just choose to let the public in.

Maybe the headline should be: “Goats milked for every cent in Canberra Centre”.

haha. But they don’t have beards yet.

what about the kids ?

Nothing worse than a trespassing goat….

Maria Alcock - 12 hours ago
Genny she looks so much like rabbie View
Moira Begg - 13 hours ago
Kevin Begg Honey bunny please. We have a house View
Catherine Foley - 13 hours ago
she is such a sweet little girl 🤗 View
Property 3

Ben Garden - 19 hours ago
Matthew James exactly. That would be too inconvenient to admit science had anything to say on the matter though wouldn’t it... View
show more show less
*Results are based on activity within last 7 days

@The_RiotACT @The_RiotACT
Honey Bunny is a sweet little rabbit at @rspcaact looking for a forever home. Could she be the perfect bunny friend for you or someone you know? https://t.co/Iy9cJVliRM (14 hours ago)