Whatever has happened to the Downer shops? 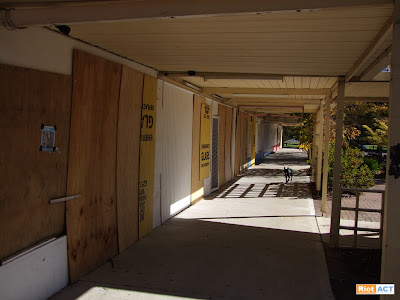 Back in 1988 quite a bit of bicentennial money was spent on the Downer shops. A very nice precinct was created, almost like a monastic cloister.

Having lived in Downer a couple of times it was something I really appreciated.

Over the years the fortunes of the shops has waxed and and waned. It’s had bike shops, take-aways, a rather good indian restaurant, and a very handy supermarket.

Only there’s nothing there at all these days. It’s all boarded up.

Some of you will say that’s the result of changing demographics, market forces, and proximity to the burgeoning commercial precinct of Dickson.

Only I happen to know that people interested in renting the space can’t even get a quote from the lease holder.

Suspicious minds might wonder if it’s being deliberately made derelict in order to make a case for a change of use. Apartments perhaps?

So should the ACT Government at least threaten to resume the lease unless the site is returned to its intended purpose? 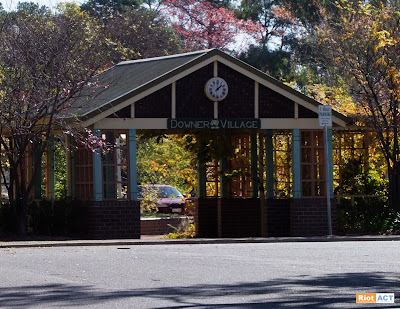 42 Responses to Whatever has happened to the Downer shops?
Filter
Showing only Website comments

the Canberra Playback Theatre Company rehearse there on wednesday nights and have public shows too most terms, so I’m there every week for several years now, but gosh its a shame. I often wish there were some neat little restaurants to enjoy there, the courtyard is lovely.

BTW – The planned office building looks like a shocker (the same old shit you see all around canberra). see http://www.realcommercial.com.au/commercial-real-estate/5511512

I used to live in Downer.

As far as I can recall, the minimart closed down c. 2004. the cafe then followed and the indian restaurant closed by 2005 i think. after that there was a martial arts club set up in the minimart site. one of the other shopfronts was also let but i don’t think it was a business (the windows were always obscured – perhaps a studio). While I lived there it was always a pretty grim strip although going there on a summer’s evening made you appreciate the potential the courtyard had, with folks enjoying alfresco dining at the cafe and restaurant. A pity about its demise. Thry should model themselves on Pearce. A good cafe or restaurant plus a well stocked mini mart should be enough to attract patrons and other businesses.

rebuilding it with flats above shops wouldn’t be a bad idea so long as it was sympathetically done (ie not too big). At least then you’d have more of a captive market combined with the surrounding flats and duplexes. But they really need an entry road onto Melba St. Perhaps facing Swinden St.

Also, the community hall is well used, and is heritage listed I think (old CSIRO agriculture office). I suppose they’ll just build the units up to the door…

Yep. This is a gorgeous little open courtyard with wide verandahs.

It could have been really lovely with a vegie cafe and some organic grocers etc.

A major opportunity lost. The Greens should take on the cause of local shops. It is ridiculous that shop owners are allowed to let the shops wither and die and then make a motza on units, while local residents have to drive to major centres to get bread and milk.

Apartments would be just awful.

Apartments have a place in the scheme of things, but that space has a real aesthetic to it that would be spoiled by that kind of building. In my opinion.

Apartments with shops underneath, more semi-density housing people support shops and cafes, and no more stupid suburbs like Forde, too far from the city stupid stupid stupid !!! cut down on car use now, while I,m at it ban Summernats too.

I loathe Dickson Woolies. There is never enough checkout staff, no matter what day, time of day or how crowded they somehow manage to ensure long lines.

I think it’s Woolworths Policy. They do it in Qbn, too. No matter what time of the day or night, there’s huge lines. Coles Qbn is the opposite, they’ll even leave checkouts open with no customers at them.

Bring back the indian! Nothing like the feeling of a vindaloo indused burning ring of fire the next morning.

Apartments would be just awful.

Don’t you even dare think of moving out of North Lyneham shops! 😉

Local shops are important to people that dont have cars as well, before we moved to North Lyneham I had never thought about it. But there are a lot of people that are unable to venture that far from there home. if they dont have family or friends that can drive them, or cant afford taxis and dont trust Action buses they are trapped. So local shops are important for the whole community.

Living in Kaleen I love that I can walk to both IGA and Superbarn I now hardly ever go to coles and woolies. The price difference are not that big and the convienience is worth it.
Shop local support a Canberran

I hope so too, but I have heard rumours of units in Hackett too…..keep shopping locally people, if you want to keep your local shops in existence.

We were going to move into Hackett but the development time table did not suit. The owners of this shopping centre are trying hard to rejuvinate it, good on them. I hope the shops at hacket fill up and do well

Chokubeijo – there are empty shops at Hackett for lease. There is a supermarket and a hairdresser and nothing much else. Free parking and always lots of it – unlike Watson and Ainslie. Less passing trade than those shops tho.

I think Downer disappeared cos the local supermarket deteriorated to the point of selling only dusty old stuff that was past its use-by date. I gave up even buying bread, the place smelled so bad.

But people will support a decent local shop. Hackett IGA does ok, and they have no more locals than Downer.

I believe a small set of shops could work at downer, the current centre would be great with a few cafes and maybe some specialist shops, ie and orgainic centre with greengrocer, backer and butcher. people will travel from other suburbs to go to good shops

I loathe Dickson Woolies. There is never enough checkout staff, no matter what day, time of day or how crowded they somehow manage to ensure long lines.

‘Prepared to support their local shopkeeps’ sounds like a lot of empty jingoistic rhetoric to me. If it’s a choice between paying more for a smaller range (and then having to go elsewhere to finish off the shopping) then people will gravitate towards larger centres. If it’s convenient to use a closer, smaller store for the odd thing (bread, milk, etc.) then the store will have problems generating enough turnover to be viable.

It may sound like empty jingoistic rhetoric to you, but it is something that my family believes in and does.

Yes, I realise that I am paying above the norm for the majority of my groceries, but I come from a long line of local shopkeeps and my jingoistic rhetoric is never empty. 🙂

As for the rest of the shops at Cook, apart from the two new shops recently opening, the other three shops haven’t changed hands in the past 6 years.

It is unfortunately when there are empty shops in any centre, but I always support my local.

Gareth Peck - 23 minutes ago
Nathan Lofthouse what? so you're saying everything on social media isn't well researched, unbiased fact??? WTF??? View
Gabriel Spacca - 8 hours ago
Pretty sure he is not the target demographic for TikTok. View
Larry Appley - 8 hours ago
A publicity stunt from a former radio announcer? Who would have thunk? View
Property 26