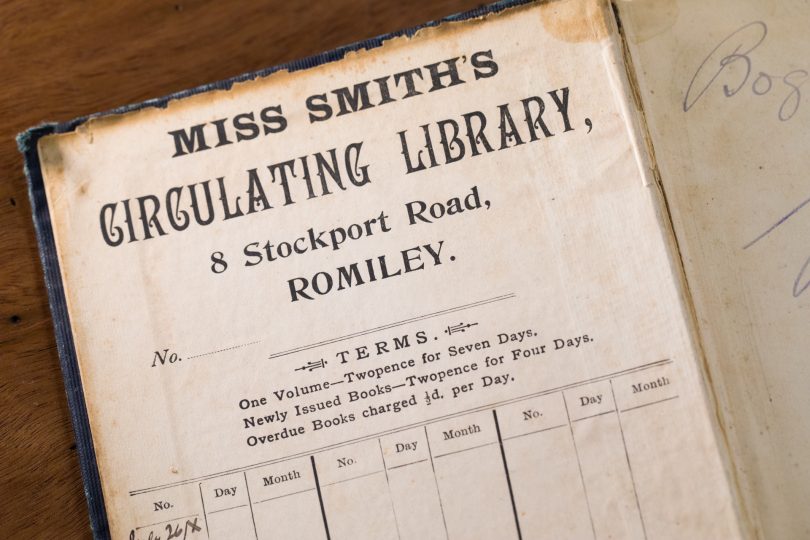 How rich could Miss Smith possibly get charging only a halfpenny a day for overdue items? Photos: Michelle Kroll.

Every week, hundreds of books find their way into Yass Vinnies. Mostly they’re by Bryce Courtenay, Jeffrey Archer and John Grisham – and usually, at least a few are coloured various shades of grey.

But every so often you come across a treasure and, if you’re lucky, there’s a mystery attached.

Clearly, the book is here to tell a story, but sometimes its provenance tells a better one.

Such is the case of The Innocents Abroad – or The New Pilgrim’s Progress by Mark Twain (Samuel L Clemens), which was donated to Yass Vinnies recently in a box of other younger books. This edition, published in London by Chatto and Windus, is dated 1902 and is billed as “a new edition, with 234 illustrations”.

One of the eagle-eyed Yass Vinnies volunteers, whose father, a newspaper publisher, instilled in her the importance of words, spotted the treasure and brought it out for further investigation.

“There was something about it,” she said. “It just looked special.”

It started being special on its inside front page, covered by a sheet saying, Miss Smith’s Circulating Library, 8 Stockport Road, Romiley. It featured warnings about how much you’d go into debt if you were late returning it – even by a day.

On the inside page, someone has scribbled what looks to be “Boguderra” in pencil above the initials G.A.C. After some Googling, and with thanks to whomever invented newspaper digitisation, we found a record of Boguderra Parish in the County of Bland.

This was courtesy of the Temora Star newspaper of 6 February 1904, two years after the book was published. 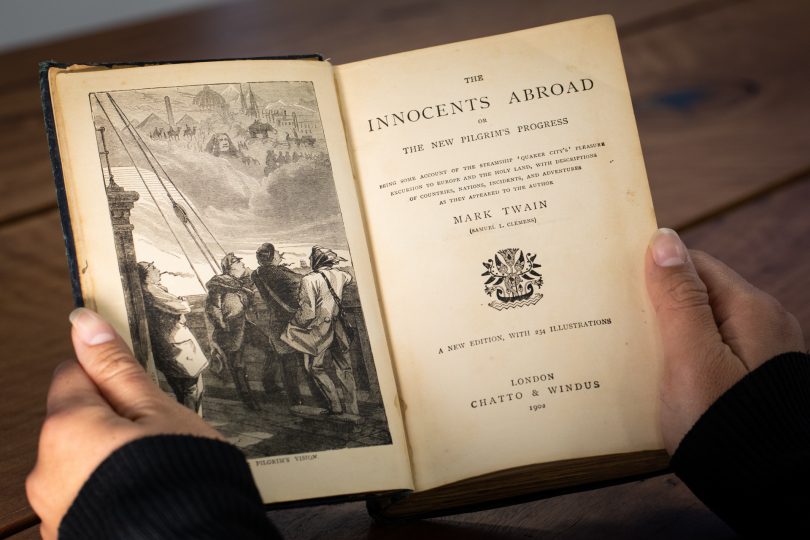 We’d love to know how this 1902 copy of The Innocents Abroad, also known as the New Pilgrim’s Progress by Mark Twain, found its way into a Vinnies op shop at Yass.

This very early edition boasts in capital letters: “Being some account of the steamship ‘Quaker City’s pleasure excursion to Europe and the Holy Land, with descriptions of countries, nations, incidents and adventures as they appeared to the author.”

It was “affectionately inscribed” to Twain’s, “Most patient reader and most charitable critic – my aged mother”.

Although clearly showing its age, the edition boasts some stunning black and white plates inside, and lots of pressed flowers scattered throughout – including one captioned simply, Goodbye.

Myths and Legends of Japan by F Hadland Davis, billed as “author of The Land of the Yellow Spring and Other Japanese Stories”, was published in 1912 by the George G. Harrap & Company, 9 Portsmouth Street Kingsway WC.

It boasts 32 full-page illustrations by Evelyn Paul with such titles as “The Lovers Who Exchanged Fans”, “Raiko and the Enchanted Maiden”, and “The Moonfolk Demand the Lady Kaguya”.

There also looks to be a story within a story with this book, too, as it has a pencilled dedication to “Headley Bentley with love” dated 12 September 1912.

READ ALSO Another Wildcare success story: Pansto the rakali released back into the river

The final book uncovered from the donated box was published in 1958, but geographically, a couple of million miles away – On the Farm – a First Reading Book by Edward W F Dolch and Marguerite P Dolch by the Garrard Publishing Company of Champaign, Illinois.

Although it is clearly an educationally fascinating book, someone seems to have taken a bite out of the opening page corner, so we’re not sure if it has much value. But it does have an interesting note in the foreword.

The First Reading Books’ “stories are told almost entirely with the 95 common Nouns and the easier 110 words of the Dolch Basic Sight Words. Beyond these simple lists, the books use about one new word per page”.

The other books in the donated box were way older.

So how did any of these books get to Yass? We’re guessing perhaps a diplomat who moved to the town on retirement, maybe a down-sizing collector of classics, or someone who just got lucky at a car boot sale the week before? You guessed it; we have no idea.

If you know, let us know.

The final word: all books will be for sale at Yass Vinnies once their value is determined.