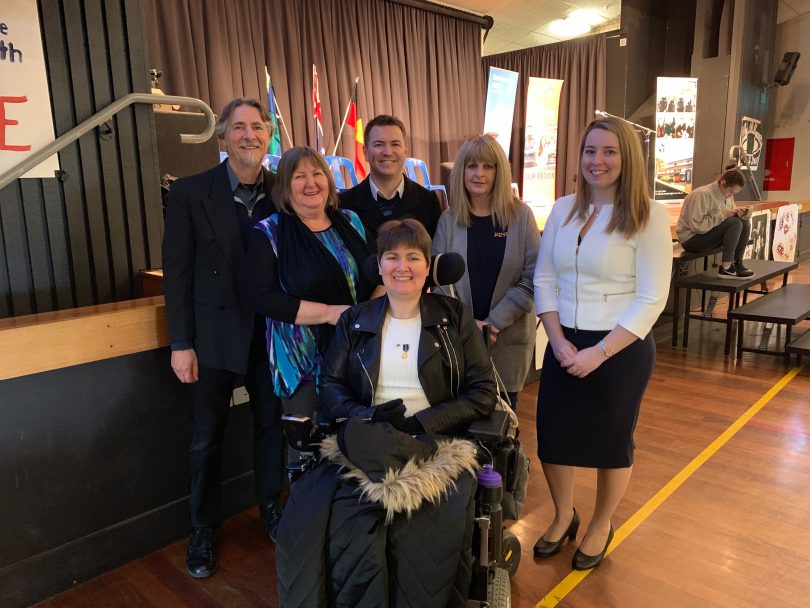 Many of us wouldn’t remember what we were doing at 16 years old, but for Anj Barker, it was a year that changed her life forever.

For almost two years she had been dating a popular boy in her hometown in regional Victoria, and the relationship had reached breaking point. What had started as a sweet courting eventually turned to verbal abuse, severe manipulation, and eventually physical assault over the course of around 18 months.

Afraid he would kill himself as he often threatened to do, and hoping she could change him for the better, Anj stayed in the toxic situation. Then in January 2002 after a particularly disturbing episode, she broke it off and vowed it was over forever.

He continued to pursue her though, so on a fateful night in March she went to meet with him to say it was well and truly over.

Enraged, he violently strangled her (dislodging her throat), bashed her head against a steel bench, kicked her, and stomped on her face. Found by passers-by, she was rushed to hospital where she spent three weeks in a coma while her parents were told to “prepare for the worst”.

Refusing to give up, Anj proved all the doctors wrong as she slowly came back to life. It took her nine months to move her thumb and five years to get her voice back, but with constant rehabilitation and a determined spirit, she gradually recovered.

Not wanting anyone else to go through the same ordeal, Anj began speaking out about domestic violence – particularly to teenagers who may not know a lot about it, or could never believe it might happen to them.

Since 2007, Anj has dedicated countless hours of her life to speaking with thousands of high school students about the early warning signs and consequences of domestic violence.

Helen Barker, Anj’s mum, says she’s so proud of her daughter and what she achieves every day.

“She loves going out to the schools, and fills halls whenever she does. We’re so proud of her. It can’t be easy re-telling her story, but she does it because she knows if she can help just one person escape a bad situation, it’s all worth it.”

Despite never having entered a single award, Anj has been named Victorian Young Australian of the Year in 2011, was voted in the top 100 most inspirational Melbournians, and the top 100 influential Australian women. She appeared on the ABC’s You can’t ask that program alongside other domestic violence survivors, and was a very deserving recipient of an OAM (Order of Australia medal) in this year’s Australia Day Honours List.

As an ambassador for PCYC Canberra, Anj has just completed another school tour in our nation’s capital, funded by Bendigo Bank.

“We’re so excited to be back in Canberra!” says Helen. “Anj is very proud to be an ambassador for the PCYC, and grateful to Bendigo Bank for funding it – she’s banked with Bendigo Bank all her life and loves being part of a community bank.”

Anj’s school visits have taken place at select high schools in Canberra, and consist of a video, talk, and Q&A session.

“Anj says there are no bad questions – anyone can ask her anything. We’ve had so many letters and feedback from those who have seen her talk. It’s so inspiring. So powerful.

“I sometimes ask her, how did you get through it all? And she says, I can sit back and do nothing, or I can work to improve and be the best person I can.”

This is a community message, brought to you by Canberra Community Bank® Group (aka Bendigo Bank in Calwell, Jerrabomberra, Curtin and Wanniassa).

She is on an eye opening episode of ‘you can’t ask that’. Amazing resilient woman!

chewy14 - 11 minutes ago
Won't be fooled, I said it helps to protect Australia. But only partly through the hardware, the bigger benefits come from th... View
JS9 - 49 minutes ago
There has certainly been a distinct shift to chest beating since Dutton has become Minister. That is his style, and he won't... View
JS9 - 52 minutes ago
By strategically aligning in particular with the US at this time in the public 'look at me' way we have, we are lining up beh... View
News 2

Tom Worthington - 17 minutes ago
Fond memories of the old Gowrie Hostel, where I was put up as a new public servant in the early 1980s. We all congregated to... View
Property 22

Rhonda Beadman - 2 hours ago
Fantastic, we hope this happens View
David Gooch - 2 hours ago
Yes.. but a real track nor a political stunt.. View
Suzie Wong - 2 hours ago
Haha, then everyone went into the city or Kingston to warm up on a few cold beers View
News 25

Maya123 - 2 hours ago
I'm not 100% sure who you were answering. I don't think anyone would necessarily argue with what you wrote. I think the relat... View
JS9 - 3 hours ago
The most heartwrenching cases are for those towards the end of their careers with still lots to give, but not given a chance... View
News 15

From Braidwood to Mogo, helping NSW farmers with Christmas cheer

Can you be someone’s Secret Santa this giving season?

@The_RiotACT @The_RiotACT
Dance schools across the ACT are set to begin sharing important water safety messages online thanks to a new partnership between @READYSETDANCE_ and Kids Alive https://t.co/wOE8ncSt0z (56 minutes ago)