Experts in buying, selling & renting
Your property, your future
15 December 2017 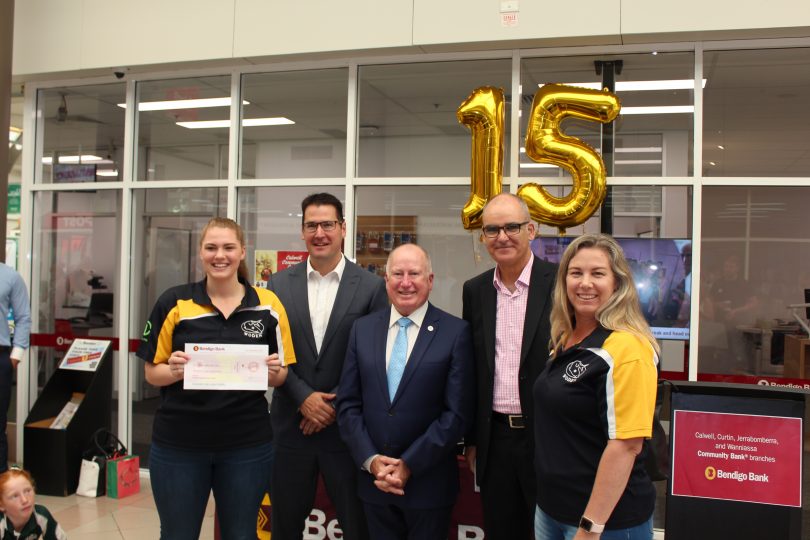 Senator Zed Seselja, Minister Mick Gentleman MLA, and Neale Guthrie, the Chairman of the Board of Canberra Community Bank Group with the Woden Valley Swim Club, winners of a $500 grant from Bendigo Bank. Photo: Supplied.

A big birthday party was held in Calwell on Wednesday (13 December) morning to celebrate Bendigo Bank’s 15th birthday in Calwell and Wanniassa.

Special guests included Minister Mick Gentleman MLA, a Member for Brindabella, and Assistant Minister for Social Services and Multicultural Affairs Senator Zed Seselja, who were on hand to give out grants to local community organisations.

Six $500 grants were awarded to local organisations that have helped the Tuggeranong community, as nominated and voted by Tuggeranong residents.

The birthday giveaway wasn’t a first for Calwell Community Bank, having donated hundreds of thousands of dollars to the region over the last 15 years. Former recipients include Theodore and Gowrie Primary schools, the Tuggeranong Buffalos, Alzheimer’s Australia and Organ Donors Australia to name a few.

One of the grant winners, the Tara Costigan Foundation, aims to raise awareness of family and domestic violence and to break the cycle of violence through the Tara’s Angels service. It is a free of charge, post-crisis service offered to survivors who are ready to rebuild their lives.

Nathan Costigan, cousin of Tara, was on hand to receive the grant.

“Thank you so much to Bendigo Bank and for everyone who voted for us. Our service provides post-crisis for domestic violence and we are currently helping 17 families who have suffered from domestic violence.”

The Calwell and Wanniassa branches were opened after a community-led campaign brought back banking services to the Tuggeranong Valley, following mass closures in the late 1990s. In 2017, Bendigo Bank branches became the only bank branches in Tuggeranong, outside of the town centre.

Neale Guthrie, the Chairman of the Board of Canberra Community Bank Group, was excited to celebrate the company’s legacy in the region.

“In contrast to our competitors who are closing local branches, we have just signed another lease and refurbished the branch here in Calwell.

“We are not going anywhere, and this is why we exist, to support people in the Tuggeranong Valley,” said Mr Guthrie. 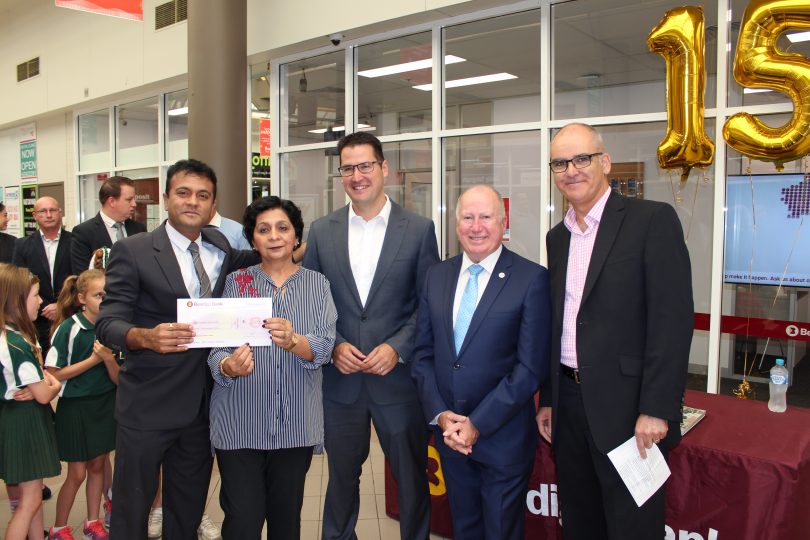 Senator Zed Seselja, Minister Mick Gentleman MLA, and Neale Guthrie, the Chairman of the Board of Canberra Community Bank Group with the India Australia Association, winners of a $500 grant from Bendigo Bank. Photo: Supplied.

“I commend Bendigo Bank for 15 years of their commitment to our community. I know how important you guys are to so many people. To have branches outside of town centres are so important to the local customers and to local businesses.”

“You have been here longer than I have been in public life, and may you be still here after I have moved on because you are so important to our local community,” said Senator Seselja.

Mick Gentleman, MLA for Brindabella, who was there at the opening of the branches 15 years ago, was proud of the work the branches have done in the local community.

“Over the period of 15 years, Bendigo Bank has delivered over 1.2 million dollars to community services across the Canberra community, which is fantastic. I thank you for the great work you are doing in the local community.”

If you’re interested in moving your banking to the Canberra Community Bank Group, contact your local branch to discuss your needs.