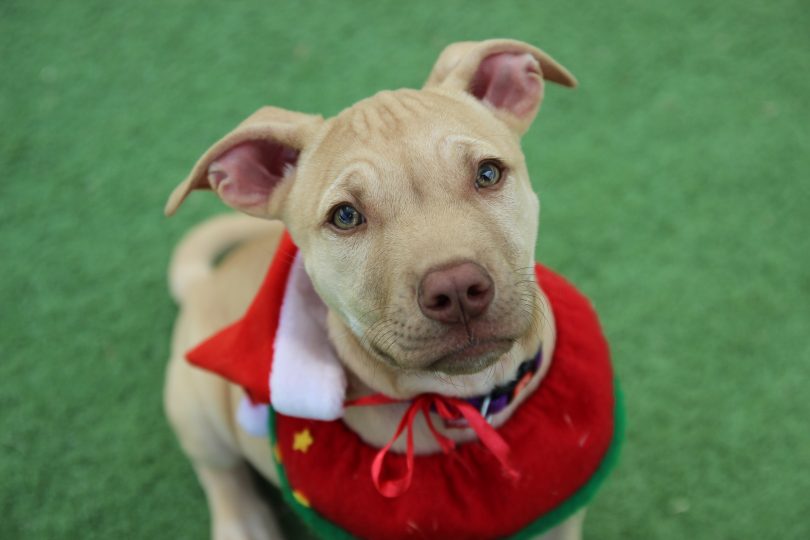 Would you euthanise this 8-week old puppy based purely on its looks?

That’s what happens in several states within Australia every day, but fortunately not in the ACT. Because of a point-scale system in other places, she would be classified as a Pit Bull. There are no DNA tests for Pit Bulls, so the only way that you can make this determination is if you base it on their appearance.

Thousands of dogs just like her are judged every day, not for what they have done, but for how they look. Legislation to ban certain breeds (called Breed Specific Legislation or BSL) of dogs exists because people have stereo-typed certain dogs out of fear and misunderstanding.

Despite these types of laws in place across Australia and other parts of the world, they don’t work. That’s right! Study after study across the world have shown that jurisdictions with BSL in place have not decreased the number of dog attacks on people or other animals.

This view was backed even last year when a Parliamentary Inquiry in Victoria questioned the effectiveness of their restricted dog breed legislative arrangements. Their legislation had specifically targeted American Pit Bulls in some form since 2001. The conclusion of the Committee was that, “Victoria’s current system of identifying and dealing with restricted?breed dogs is not working.” Furthermore, it found that “there is insufficient and sometimes contradictory evidence on whether Pit Bulls (however identified) pose a greater risk to public safety than other breeds.”

Nationally, we are aware of 34 dog attacks that resulted in death since 1979. Of those, only three of those dogs were described as a Pit Bull or a Pit Bull cross including the one that tragically occurred last week. Furthermore, multiple international studies in the UK and in other places have determined that there is inconclusive evidence that specific breeds like Pit Bulls are genetically or statistically more likely to attack.

So, if BSL doesn’t reduce dog attacks, what does? The answer – owners.

Socialising dogs when they are young can have a significant impact on how a dog relates to the world around it. Socialisation is when an owner introduces the animal to a variety of new environments, sounds, scents and people in a safe way so that they can learn that the world is not that scary and therefore that the dog learns to cope calmly in ANY situation.

While, it’s ideal to start when they are young, more info about how to socialise your dog at any age can be found here.

Controlling dogs effectively in all environments is also important. This includes containing them safely in homes and yards, always walking them on a suitable lead/harness and never leaving them unsupervised with young children.

Desexing is another way to help with undesirable behaviour. This is especially true with male dogs if done early in life (desexing dogs by six-months is the law in the ACT unless you’ve applied for a licence).

If you add up all of these actions above, it once again leads to the responsibilities of a good pet owner. Given the many, many studies done that prove that BSL doesn’t work, then that too is proof that good dog behaviour begins with a responsible pet owner.

Want more proof? Start with this RSPCA Australia document and following the links in the back from the Australian Veterinarian Association and other well-regarded institutions or studies.

Let’s help the ACT remain as the leading jurisdiction in Australia for animal welfare, and support good legislation that makes owners more responsible, not useless ones that kill animals based on their appearance.

All a dog wants to do is love. If they are raised with hate and aggression, then that is what they will do.

kenbehrens - 7 minutes ago
Lower check-in numbers have nothing to do with people not going out due to Omicron. Everyday, I see people (mostly under 40's... View
News 231

Oiledpengu - 29 minutes ago
Cos poor people shouldn’t be responsible for their actions View
Jimbo Lambert - 1 hour ago
Justo Justo some people have driven that stretch of road for 30 or 40 years at 60km/h. If they suddenly reduce the limit it i... View
Dean Soccol - 3 hours ago
Nathan Grieve in Queensland every time we get a fine we lose points. So if you are one of those that don’t care about the m... View
Community 2

Ann Gugler - 31 minutes ago
I met Alan many years ago and hopefully I have copies of all his books, but I will keep an eye out for others just in case I... View
Opinion 7

cbrfuture - 5 hours ago
This isn’t merely about educating Australian youth. Australia is a nation of migrants, and where our own school curriculum... View
show more show less
*Results are based on activity within last 7 days

When David Grimshaw purchased a replica German World War II tank from the Australian Armour and Artillery Museum, he didn't...
*Results are based on activity within last 7 days

RSPCA’s Pets of the Week – Sophie, Brioche and Pretzel

RSPCA’s Pets of the Week – Douglas and Mademoiselle