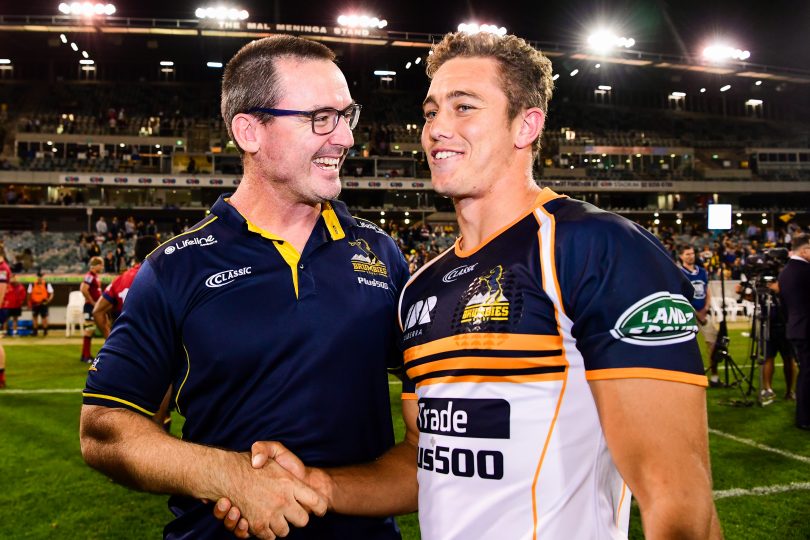 Dan McKellar is focusing on the 2019 season. Photo: RUGBY.com.au/Stuart Walmsley.

A sign in the Brumbies’ meeting room probably reveals as much about Dan McKellar as anything I am about to tell you. The message informs players that phones are prohibited from the physiotherapy area, the team meeting room, as well as meal times when the team is together.

Forty-two-year-old McKellar has worked hard to ensure there is communication within his team and senior players are engaging with younger team members. It’s a simple way to build chemistry and culture. A big focus has been the off-field dynamics so that players know more about each other.

As it is, the players are a tight group without the distractions of Sydney, Brisbane and Melbourne. As such, there is a ‘family’ quality about the team.

Heading into the 2019 season, the core player group remains extensively intact. The only two missing from the regular starting side, who both played last season, are Isi Naisarani and Kyle Godwin. Pete Samu, has been recruited to add depth to the backrow, while several players are in contention to replace Godwin, including Jordan Jackson Hope.

McKellar, though, has been thrown a curve ball by Rugby Australia in the leadup to the World Cup. Up to five of his players are in camp with the Wallabies prior to the Brumbies’ first trial against the Melbourne Rebels. These players will effectively have little to no pre-season with the rest of the Brumbies squad. The Brumbies will also be called upon to rest key players for up to two matches in a 16 game season. This is because priority is given to Wallabies’ representation in a World Cup year.

Rather than use it as an excuse, he says his side will be ready to go come the opening game of the season. And they will be fit. Many a player will tell you that the Brumbies have a reputation as one of the fittest in Super Rugby.

McKellar says there are still decisions to be made, including the captaincy. Last season it was shared between Christian Lealiifano and Sam Carter.

As to his own future, Dan McKellar says he would like it sorted sooner rather than later. He comes off contract at the end of the 2019 season. He says he is keen to stay and says he received a favourable response in initial talks with CEO, Phil Thomson.

McKellar is the first to admit that rugby is a ‘results-based’ business. Heading into his second year as head coach, the signs are good. The success of the pathway program, for instance, which has resulted in a number of local players coming into the squad and pressing for selection, is a huge positive.

One of his trademarks is his ability to relate to his players. He is direct in his communication and the players are left in no doubt about what is required of them. There is also no doubt the players have bought into his ‘team first’ philosophy. It is one of the reasons why I believe the Brumbies will succeed in 2019.