Why does Lake Tuggeranong smell and look so foul? 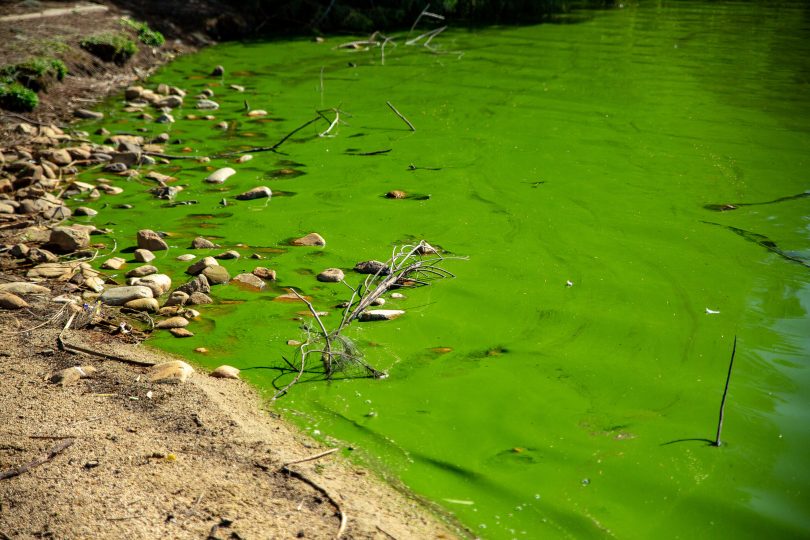 What’s watery, green and stinks? The answer: Lake Tuggeranong. The pungent smell and bright green hue has scientists and researchers puzzled as to why the lake is presenting such an overwhelming feast for the senses.

For Southside locals, that eye-stinging smell wafting through the town centre is emanating from the lake and its massive algae bloom, which has been closed to primary contact activities – such as swimming and bathing – since December last year.

So what is causing this extreme bloom? University of Canberra water ecologist Ross Thompson is currently doing studies on the lake’s water quality, hoping to find an answer – and a way to treat it.

He said it was the worst algae case he had seen in the nation’s capital and as the nights start to get cooler, he believes the algae will only get worse.

“This algae case in Tuggeranong is now worse than a lot of the pictures that we see in a lot of textbooks showing what a blue-green algae bloom looks like,” Mr Thompson shared.

“I have taken a lot of photos and shown students that this is what blue-green algae look like. It has even got the perfect blue-green colour.” 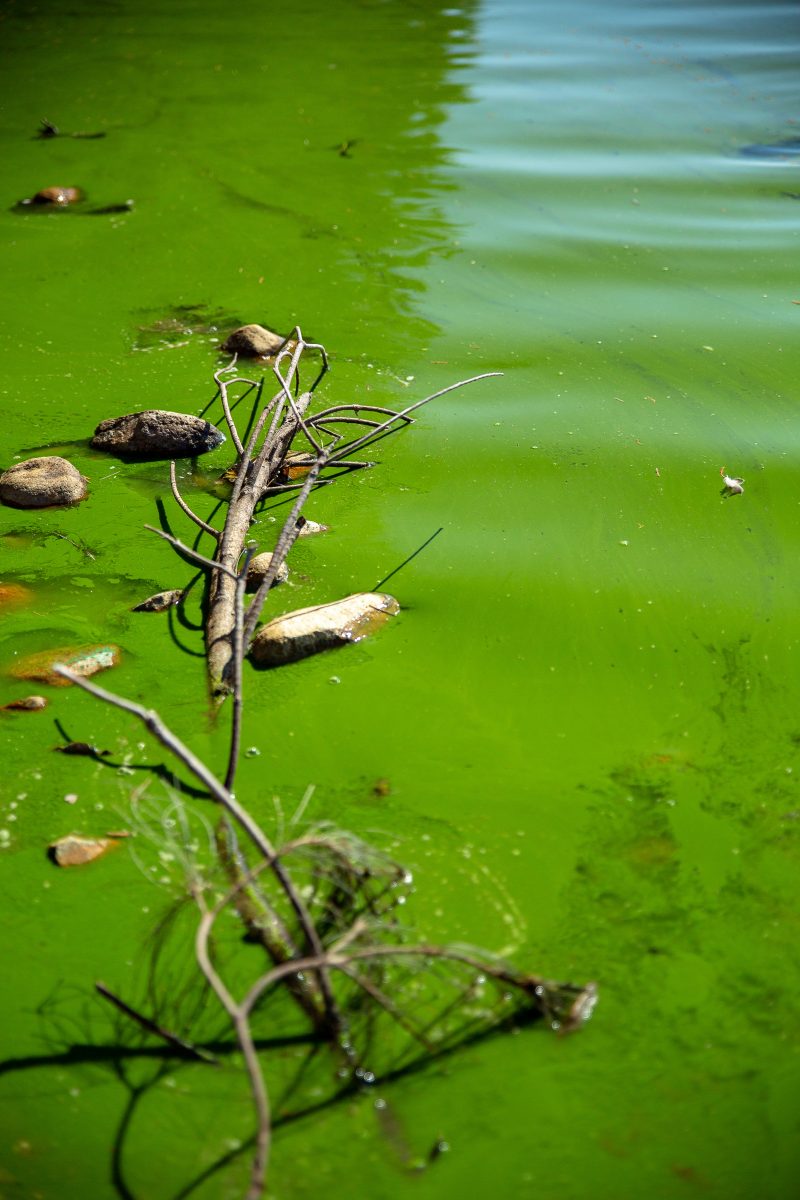 A combination of warm and cool days is what causes a bloom of blue-green algae.

Put simply in layman’s terms, the combination of warm days followed by cold nights is what causes blue-green algae in the lake.

“Everyone will have noticed that we have had a prolonged warm spell where the days have been much warmer then we would have expected for this time of year,” he shared with Region Media.

“Now we are getting cold nights as well so when we have prolonged warm conditions, all of the nutrients tittle out of the warm water and plop into the cold water at the bottom.

“When you have a cold night, the cold water and the warm water mix together, causing the blooming of blue-green algae.” 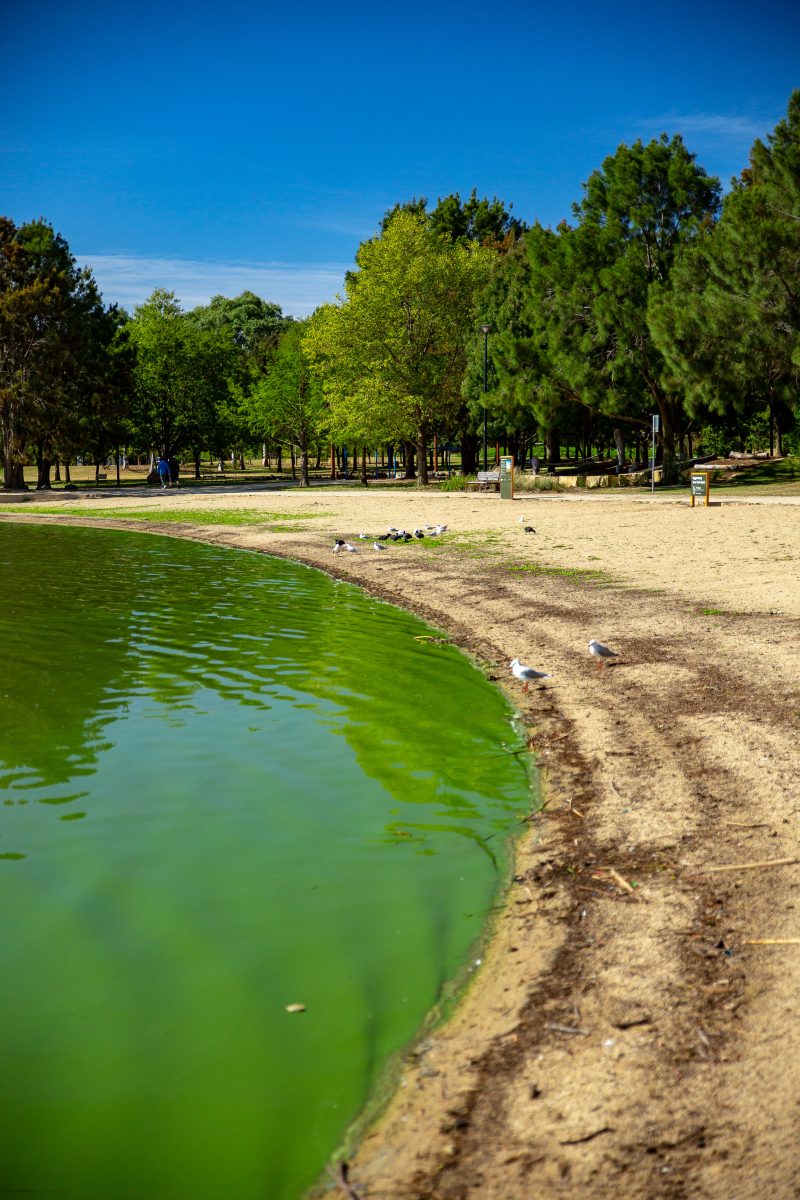 Anyone who is concerned about exposure to the algae should contact their GP.

Mr Thompson said once the air temperatures start to drop in the coming month, the levels of algae will start to collapse but until then, he and his team of researchers will find out how to treat a bloom of this nature after it has started.

“Normally, if want to stop a big bloom like this, the reality is to go out and intervene early but the work that we have been doing at the moment is trying to treat the bloom after it has started,” he said.

Mr Thompson is also hoping to figure out why Lake Tuggeranong has such an excess nutrient problem.

“There is a high-nutrient load to the lake and we are still trying to get a handle on where that is coming from. We are running a program this year where we have been looking at the inflows to the lake, which has shown large amounts of phosphorous and nitrogen, loads which we can’t explain with a simple explanation.

“Our ongoing work is going back up into the catchment and trying to work out what the sources are for the nutrients.”

Anyone concerned about possible symptoms of blue-green algae exposure following water exposure should contact their GP.

The ACT Government has taken Federal Government funds to clean up Lake Tuggeranong and redirected the money into other Canberra waterways instead. Such poor treatment of this terribly polluted Lake for their own political purposes.

Page 4 of This first link has Andrew Barr personally redirecting millions of dollars given to help clean up Lake Tuggeranong over to the Lyneham wetlands in his own electorate.
http://www.cmd.act.gov.au/__data/assets/pdf_file/0010/340399/Documents_-_Termination_of_Part_B_Stage_1.pdf

The second link shows that out of the millions given to fix Canberra waterways that instead of doing enough to fix the worst Lake, they instead spent money on “The largest project is the Molonglo construction wetlands between Cotter Road and Dixon Drive”.

BJ,
This is incorrect.

The first link is referring to the cancellation of the stormwater reuse project because the independent regulator found that the expenditure wasn’t justified.

This was before they got the federal money, it was a different project.

If you looked around Tuggeranong, you would see the money that’s being spent on new wetlands, ponds and other projects in Tuggeranong.

No Chewy YOU are connecting the two projects not me. I never said the first re-direction of funds was from the Healthy Waterways project (which was a later funding initiative). I was just giving an example of Mr Barr moving money dedicated for Lake Tuggeranong (you can say the independent regulator found that the expenditure wasn’t justified, but you would find this was contentious if you read more than just the ACT Government document that I linked).

The first Federal funds for Lake Tuggeranong (that were redirected to Lyneham by Mr Barr) were from federal projects such as National Water Reform as well a Kevin Rudd funded project that I can’t find any active reference to on-line (it’s all ‘page no longer exists’ now).

Just today the Canberra times had a report about the Blue/Green algae issues from the exact Kambah flow that much of that funding was meant to address.

BTW do you think trying to fix this inlet to Lake Tuggeranong wasn’t justified? Or do you think there might have been some politics at play?

BJ,
So why did you provide the first link if you weren’t trying to link the two projects?

I’ve read more as you’ve suggested and there was no redirection of funds designed to fix up lake Tuggeranong and you’ve linked no evidence of any such thing occurring.

And as I have linked, you must have missed the current construction around Tuggeranong for this issue. It’s not that hard to see the big hole in the ground near the shops at Kambah where the pond is being built as well as the new weir and Isabella pond at the lake.

Again you are creating straw men for your arguments.

I know there are projects for Lake Tuggeranong in the current Healthy Waterways project. Why do you keep highlighting these as if I’m not aware of them?

The question is was ‘enough of the funds’ reserved to tackle the Lake Tuggeranong problem? Why do the government say the biggest project is for the new Molonglo suburbs? Why do Water experts on ABC radio canberra say they haven’t done enough projects to help fix Lake Tuggeranong? They say the projects funded involve too much guesswork. Why does the news on the problems at the northern inlet show a worsening situation for the Lake?

Hopefully these new projects will improve things. I’m sure we both agree on that.

As for the redirection of Federal water funds from Tuggeranong to the north. This was designed to show what happened previously to funds dedicated to one area and that Mr Barr has form in shifting funds to his own electorate. I only know about this document thanks to a Canberra water expert who argued that the funds could have been more effectively used to try and fix Lake Tuggeranong almost a decade ago. But he was ignored by someone at the upper levels.

Is this lake also in the downstream catchment from all the recently built suburbs in the southern area? If so, an increase in building site run off MAY have been a contributing factor. Yes I know there are guidelines for reducing this risk but sometimes these are not always enforced and thus the result may have an effect on water systems.

Hold regular drag boat races, like everyday for a few weeks, that will get rid of the problem.

Any sewage leaks around there?

Caused by an excess of nitrates in the water, most often the result of water run off from over fertilized farm fields.

Treatment in small bodies of water like this is best achieved by improving water circulation and oxygenation, by using submersible pumps in the deepest parts of the lake with fountain type outlet nozzles that break the water surface.

It is because of a general lack of funds and government interest in Tuggers and all that goes with planning etc..

Let boats on to help keep it aerated a bit?

Years ago it was the smell of wood heater smoke; since about 2012 the top end of Tuggers has had to endure the odours from the Mugga Lane Resource Management Centre (and soon to be blended with burning bodies at the crematorium across Long Gully Lane).

With the smell from the lake we at least have balance.

It’s now appropriate to rename the entire region as Tuggerapong.

All the nitrogen in the water from the 1000s of plants that were put in behind the Isabella weir maybe? That upper pond was recently drained, potentially creating a boom?

Ian McLeod Yes that’s correct, the plants were helping filter the water and keeping the nitrogen levels down before it ran down into the main part of the lake, but now that they have opened that weir and the water is running directly into the lake without and form of filtering, it has created a spike in nitrogen levels. From what i’ve read, the problem isn’t with how high the levels are, but with how quickly they have risen…

Ian McLeod yeah, that’s the aim of the current ACT healthy waterways program, I think there’s around 30 of them happening around Canberra at the moment, it’s good to see!

It’s disgusting and cannot be good for the residents living around the lake breathing it in constantly. 🤢

It was smelling very strong last night. We could smell it in the lounge room of our unit opposite the park.