Why I decided to leave the ABC after almost 30 years 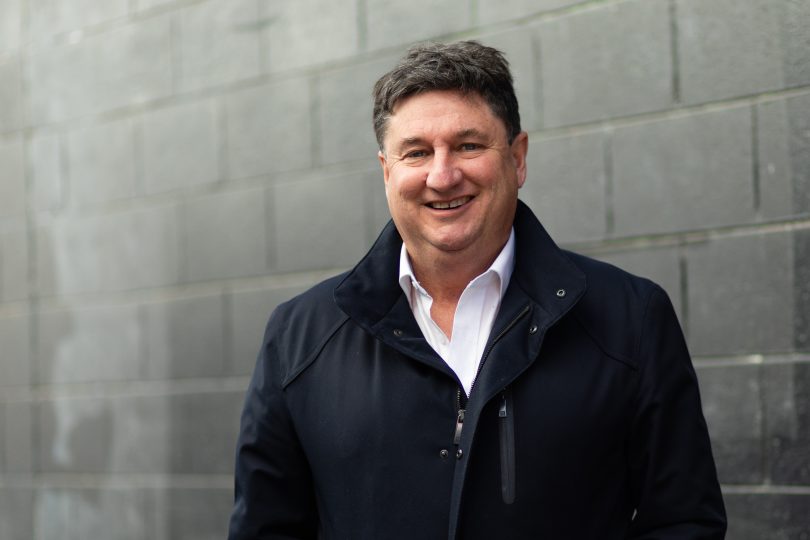 It has been undoubtedly the toughest decision I have ever had to make, after all I have spent almost my entire adult life as a sports commentator at the ABC.

Growing up in Condobolin in country NSW., all I wanted to be was a radio announcer. My bedroom was often redesigned into a makeshift studio complete with used egg cartons to improve the sound.

I had little idea how I’d get into a radio job and the prospect appeared to be even more daunting after work experience at 2SM in Sydney and 2PK in Parkes. When I was 11 years of age, 2PK was the only commercial station we could pick up on the farm and I thought it was the ‘big time’.

You can imagine a kid of that age in grain trucks and shearing sheds or droving and the only contact with the outside world was radio. The ABC, at that stage in my life, appeared to be little more than news, the Country Hour and Blue Hills. Commercial radio appeared to offer so much more.

In a meandering way I finally found myself at Radio School in Sydney, three years after leaving school. I had dreams of the big time!

Armed with 40 cassette tapes featuring what I thought was my finest work I decided to drive around Australia in my father’s ute from the farm, complete with canopy, so that I could sleep in the back under the stars, as I went from radio station to radio station. I was determined to make it happen, otherwise a life in a sweltering shed or endless hours on the tractor appeared to be my life ahead.

I travelled in the sky blue ute to every country town in NSW with a commercial radio station, but with little success.

Having exhausted all stations in NSW., it was time to head to Queensland. This was my first time across the border. I started on the coast and headed inland. Three weeks into my Queensland quest to become a disc jockey, I was fast running out money and the ute was beginning to complain, expelling unusual noises. Armed with my mechanical experience, I sprayed the offending area with WD 40, the answer to all things mechanical, and hoped for the best. Surprisingly that didn’t work, in fact the noise from somewhere in the engine grew in size.

Low on funds, I pulled into Charleville. The manager of 4VL Charleville was a bloke by the name of Al Curtin. He said he didn’t have anything for me so I jumped back in the ute and began driving east towards Roma. I broke down two kilometres from Charleville. Whilst being towed back into town, I felt broken both financially and spiritually. My dream wasn’t quite rolling out as I anticipated.

The repairs to the ute would take a week, which I was told, was lightening quick in this part of the world.

Given I was going to be in the town for a week I went back to big Al to ask again for an opportunity. I helpfully suggested that I would work for free, getting coffee, cleaning LPs, whatever was needed, just to get a foot in the door.

Thankfully, he agreed and that was the start of my radio career.

After a week my ute was ready for the next part of the journey and Al had found me a job at 4LM Mount Isa.

For the next two years it was six hours a night, six days a week of back announcing a cross between Slim Dusty and AC/DC. From there I went to 4AY Townsville and 4GC Charters Towers before ending up at 2DU Dubbo.

I ventured away from being a disk jockey to news and I was poached by the late Peter Andren to work at Mid State Television in Dubbo.

If nothing else those early days in radio shaped who I am today. I like to give as much encouragement to young commentators and athletes to pursue their goals as I can, knowing that the road isn’t always as anticipated. 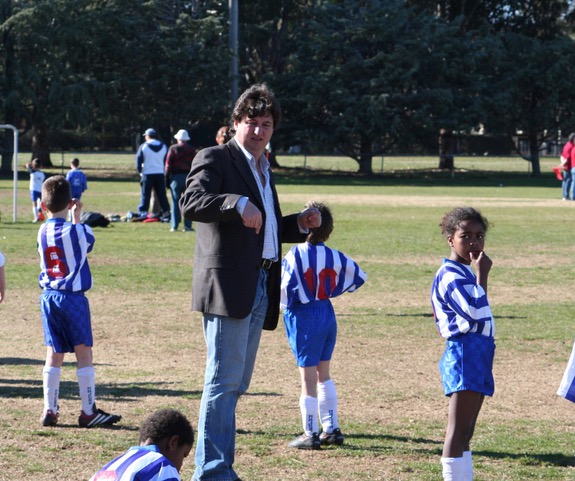 In 1988 I saw an advertisement in the newspaper for a sports broadcaster in Canberra working for the ABC. I hadn’t contemplated a career move away from news prior to seeing the advertisement. I thought I had little chance of getting the job anyway. I applied and surprised myself by landing the role, starting in a month.

From that moment on until the present day it has been a steep learning curve.

If you can imagine talking quickly without notes for two and a half hours; that is just the start of being a sports commentator. I was lucky enough to commentate at seven Olympic Games and seven Commonwealth Games. I called two Rugby Union World Cups, Wallabies, Brumbies, Raiders, Rowing World Cups, International Cricket, Socceroos, Matildas, International men’s and women’s basketball, netball internationals, and the list goes on.

It’s been a privilege to have this job.

Recently though I had started thinking about life beyond the ABC; not an easy task when I am so immersed in what I do. It’s hard to even contemplate another life.

As the thoughts became more frequent I felt as though it was time to move to the next phase of my life whatever that may be. I have worked with some of the greatest sports commentators of our time and developed close bonds with many involved in the sporting world.

Those friendships extend, over the years, to my colleagues in Canberra at the ABC, such as Julian Abbott, Greg Jennett, Alex Sloane, Michael Donaldson, Chris Kimball, David Pembroke and Bruce Webster, who in my humble opinion, were and are some of the most hard-working and committed I have encountered in 38 years of media.

I will finish doing breakfast radio and Canberra Grandstand which I have loved doing with Bron Fagan for the past 14 years. Let me tell you, it is not easy walking away from those roles.

In terms of commentating, I’m still hopeful of being involved in the future.

As I mentioned earlier, there is a sense of uncertainty ahead, but I am looking forward to the unpredictable and the unexpected. One thing that will remain is my involvement with RiotACT covering Canberra sport.

Great job Tim, you can be very proud of your legacy. A rare EQ among sports commentators that will be sorely missed on 666. Go well.

All the best Tim wherever the future takes you

Tim’s became the most recognisable sports voice on radio. His shoes will be very hard to fill. I hope he left entirely voluntarily and wasn’t part of the savage ABC cuts! Al the best, Tim!

ABC666 won’t be the same without him. But I wish him and his family well.

Tim it’s not the last Raiders game that has made you leave. All the best in the future.

Well done Timmy, absolute gentlemen and icon of Canberra sport. Genius behind the microphone and you do so much for the community behind the scenes.
Best wishes for the future.

All the best with your next journey in life. The weekends won’t be the same. We need a game of golf?

Best wishes in your future Tim, you will be missed.

Best wishes for your future, you will be missed!

good job Tim we will miss you

I can’t say thay I’m not a little bit sad about this, but thanks anyway Tim for all the good work.
Always entertaining.
Always unbiased.
good luck to you.

Also does a lot of community events – ACT rowing regattas for one. Will be missed.

HUGE loss to everyone.

All the best Tim have loved listening to you

You’re a champion Tim!! All the best for the next chapter!!

All the best Tim. Sad to hear you are leaving.

I am an avid 666 listener and will really miss listening to Tim. Wishing him all the best in his new endeavours.

Thank you Tim for your community involvement and contribution to sport. All the best for your next adventure.

Stellar career over 30 years and for most of that time, sport in Canberra was synonymous with Tim Gavel. That is quite the legacy, as will be his passionate support for the Raiders & Brumbies, the two football teams who call the capital home, at least over the colder months.
Tim will be impossible to replace of course, but whoever does step-up & fill his shoes, will surely be in a better position to share the passion with the ‘other’ dominant football code in Australia, and one that is growing in popularity in the capital. When Tim does go later in the year, I will need to find a very good reason to tune in to ABC “666” Radio Canberra.

All the very best Tim and gd luck with ur new adventure!!!😉👍😃

This is terrible news as an avid listener. Best wishes of course to Tim, but they are mighty big shoes to fill!

Good luck mate. All the best.

The Best in the Business!! Good luck in your next chapter Tim 👍👌

Another goodie leaving or gone from the ABC
All the best Tim – always spot on with facts relating to sport.

Good luck Tim with what ever you do. Alex will certainly miss you but your future is important. Best wishes to you, your wife and the kids.

Will be missed as the very best.Great support of all things Canberra

What, hope he is staying in Canberra. Such a great commentator and Canberra supporter. Will be missed!!

Canberra has been fortunate to have such a knowledgeable & considered sports commentator and community supporter .

You will be very sadly missed. You have been very passionate about canberra sports at all levels and Canberra’s main sporting teams.

My first actual memory of you, is in 1989 and a pretty amazing year for rugby league and the Raiders. 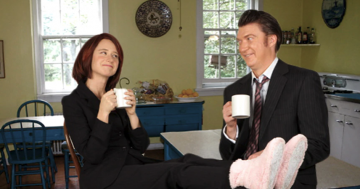