Why is Canberra the home of Australian live-action video games?

This week, Canberra Youth Theatre’s 35 Degrees 17 South is showing in the Sculpture Garden at the National Gallery of Australia – you can watch it unfold on ABC TV. 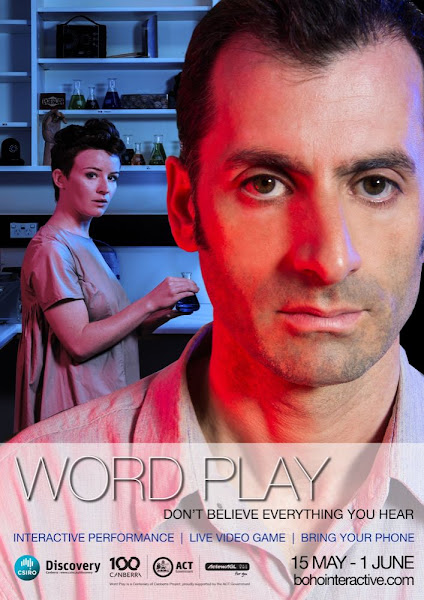 On 15 May, Boho Interactive’s Word Play opens at CSIRO Discovery. Word Play is a ‘live cinema’ work about the outbreak of a new disease that infects language and ideas. The audience interact live with the performers via mobile phone, asking questions, making decisions and in some instances directly controlling them in live video-game sequences.

Two different interactive performances driven by audience using smartphones in one month might just be coincidence, but there’s a weird tradition of live-action video games coming out of Canberra. Boho have been making interactive science-theatre performances using hacked game controllers since 2007. Companies like Last Man To Die were building shows aronud audience-triggered QR codes 6 years ago, and Serious Theatre’s Void Without Void handed the audience control over an astronaut in a live space simulation.

I’ve seen enough theatre in enough places to know that this is unusual. Of course interactive theatre is everywhere, and artists all round the world have been creating live versions of computer games since at least the 90s. But for a scene the size of Canberra to have so many companies making works that are (a) interactive, and (b) using handheld controllers is well beyond the statistical probability.

Melbourne has a trash theatre garage addiction, Sydney has a endless waves of hyper-ironic writer-performers, and Canberra is punching out nonstop live-action video games: anyone got an explanation?

Karen Hardy - 56 minutes ago
Helen Stafford WHAT DID I TELL YOU View
Acton - 10 hours ago
I use a trap which is effective in catching individual wasps and discourages nesting. The trap uses a European wasp attractan... View
Community 5

Michael Ilsley - 9 hours ago
How lucky are those children going to be being taught by such an incredible person. View
Rhonda Maxwell - 12 hours ago
Brad is an amazing young fella who is living a full life. His family and friends are s wonderful support as is his footy team... View
Pam Perkins - 13 hours ago
A very inspiring young man all the best in all your future endeavours and wonderful community support... View
Community 11

A burst water main on Wakefield Avenue is causing traffic delays and disrupting water supply in Canberra's north this afternoon...

@The_RiotACT @The_RiotACT
Local sport survives thanks to the dedication of volunteers. After decades with @NetballACT, including helping it survive insolvency in 2017-18 and then COVID-19, Louise Bilston has called time - although the passion remains https://t.co/uWx1fICLyo (37 minutes ago)