Why more men should work in childcare 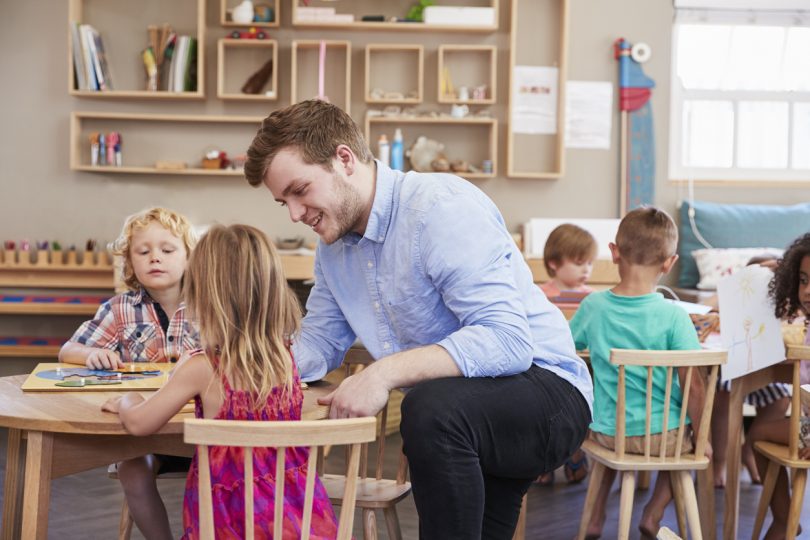 The case for men working in childcare.

As a society, we’ve come a long way in the past few decades. More men and women have begun challenging traditional gender roles to pursue careers they enjoy, rather than work that has been viewed as only “for men” or “for women”.

But childcare and early childhood education is still overwhelmingly populated by women, with the latest ABS statistics showing that females account for over 95% of all childcare workers. That’s surprising, given the increasing number of stay-at-home dads (bucking decades of “women’s role” profiling), and an abundance of research proving the importance of male role models in young children’s lives.

The RiotACT decided to chat with a male childcare worker, to find out why more men should consider working in childcare, and whether there are any barriers for men who seek childcare as a profession.

Joe Symons has worked at Artemis Early Learning Centre for just over a year, after working as a gymnastics coach for six years.

“I already had experience working with children across a broad range of age groups, and teaching is in our family, so I’m glad I chose to become an early childhood educator. I started as a full time “floater” – working where I was needed while studying for my early childhood qualification. I then began working permanently in the preschool room, where I am now an assistant room leader.”

Joe says that being part of children’s lives and seeing them grow and learn in childcare is his favourite part of the job.

“It is a rewarding experience seeing children flourish under your care. I also love engaging with the children and having fun with them during the day. I have moderate to severe hearing loss in both ears, which has actually enhanced my ability to engage and communicate with the children.

“The children have learned that ‘my ears don’t work properly’, and in turn this has given me a great opportunity to teach them sign language as part of our communication and help them understand and accept differences.”

When it comes to men working in childcare, Joe believes more men should consider becoming educators and teachers.

“They absolutely should! Especially in the preschool years, it’s a big advantage to have more male role models in children’s lives. The children react differently around men, and I think they need that as part of their learning journeys.

“I have been very lucky in the centres I have worked, that I have not had any issues or experienced any barriers that affect my ability to work successfully with the children.”

So if you’re a man and love spending time with children, or have ever contemplated a career in childcare, you should ask yourself – what’s holding you back? Is it a fear of non-acceptance? If so, it might be time to put those concerns aside and do what you really love. Because as more women move into roles that have traditionally been viewed as “for men”, it stands to reason that as a society, we should promote men in more roles that have been traditionally seen as “for women”.

To learn more about starting a career in childcare (for men and women!), visit Artemis Early Learning Centre or give them a call on 6239 3927.

How to prepare your child for childcare next year

Creating a better balance for women’s work and life

@The_RiotACT @The_RiotACT
The peafowl have been a feature of Narrabundah for 30 years, and now they have their own street sign to help keep them safe https://t.co/y4cynU4Vbs (4 hours ago)

@The_RiotACT @The_RiotACT
The Bushfire Royal Commission has heard that Australia's ability to fight bushfires could be hampered due to dependence on one US supplier of fire retardant, a situation recently highlighted by COVID-19 manufacturing shutdowns and delays https://t.co/0l2YEOtvoU (6 hours ago)