Wielding the axe over the Public Sector 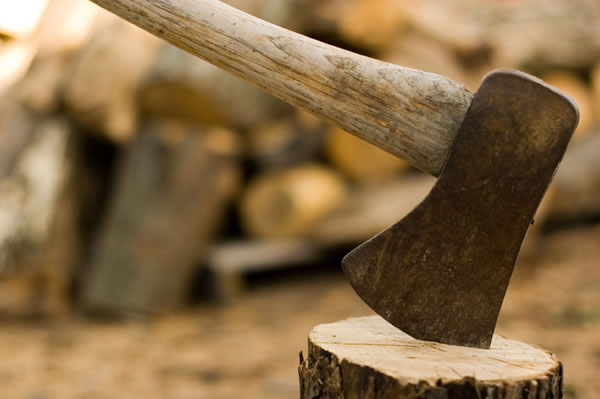 It feels a bit like most of Canberra is walking a tightrope at the moment.  Wide Public Sector cuts have been coming for a long time.  I have heard talk of departure lounges and reapplying and testing for jobs.  Whether departments are facing heavy cuts or not, there seems to be a consistent sense of unease around town because ‘you never know’ and it’s been like that for months.  The cuts are coming, but so far the major hits seem to be people who were planning to retire soon and took an early payout in what could probably be seen as a ‘win win’ situation

I was however happy to read an article in the Canberra Times on Monday talking about the Abbott government being told to ‘cut once and cut quickly’ when reducing the size of the public sector, according to Vicki Daniel, Director of management consultancy Change2020.

It’s not rocket science and it certainly isn’t applicable only to the public sector.  I recall my days working for an international bank.  Every few years there would be a crack-down on headcount.  Rumours of redundancies and cuts would leak out months before anything was done.  Engagement and productivity would fall and people would start to keep an eye out for number one, rather than playing as part of a team.  It was destructive.  We would spend months waiting for the cuts and then months attempting to repair the damage done.  Not in darning the new holes in our teams, but pulling our engagement back up and taking time to look around and trust those around us once more.  I completely agree that it would have been far more productive to make the decision on numbers, select who needed to go and ‘make it so’.  I do know it’s not that simple.

Back in March when there was a lot of talk about the Dept. of Communications ‘Spill and Fill’ program, I read an article in iTnews which quoted the CPSU Deputy National President Alistair Waters saying ‘If the department’s budget position means job cuts have to occur, then using voluntary mechanisms to achieve the reduction is best for the staff and the department.  Making staff compete against each other for their own jobs does lasting damage to organisations and to the employees affected.’

I don’t totally agree with all voluntary departures.  If you have to cut 20% of a workforce, I generally believe you want to make sure you keep your best talent.  If you offer one of your hot shots a redundancy when they know they can head up to Sydney and take up a job at equal or higher status, they’re likely to take it and leave a pretty big hole.  To me, this should be used as a time to get rid of the dead wood.  By dead wood I mean those who aren’t performing or are disengaged or causing headaches in the workplace.

For this round of cuts I sincerely hope the axe is wielding with some level of focus, with an understanding of where the weaknesses in the department are and equally where the strengths sit.

And for those who don’t survive, I hope this is the making of them.  I hope they find their niche and never look back.

Someone in an ACT Government department was saying today that they advertised a permanent ASO 6…. and have had numbers of Commonwealth public servants applying, including surprising numbers at the EL 1 and 2 level. In fact, more at the EL 2 level.

From memory, people moving from the territory (and state) to the federal public service can bring many of their accrued entitlements with them.

From the perspective of ACT rate/taxpayers this trend (I assume it’s that) could be a small silver lining in the federal cutbacks cloud, in the sense that it might make it that much easier to restrain the Territory wages bill. After years of paying a high price to compete with the relative largesse on offer in the Federal PS, this would be a welcome respite – should the Territory Government have the good sense to take full advantage of it.

Someone in an ACT Government department was saying today that they advertised a permanent ASO 6…. and have had numbers of Commonwealth public servants applying, including surprising numbers at the EL 1 and 2 level. In fact, more at the EL 2 level.

From memory, people moving from the territory (and state) to the federal public service can bring many of their accrued entitlements with them.

“Cut once and cut quickly” is also in accordance with standard operating procedures according to Machiavelli – it generally works best, but not always. Sometimes, it may be better to take the time to make intelligent decisions about cutting functions, rather than just charging ahead to implement an arbitrary reduction in “headcount”. Some relevant discussion here:

You’ve hit a few interesting observations here, which apply not just to the public service.

There is a whole lot of “dead wood” at the ATO.
IT staff who claim the title of “developer” and contribute little, nothing or create problems. These people would not last 1/2 hour in the private sector. It’s also unlikely that they would be employed at all assuming they were even invited to attend an interview. It’s a BIG problem and means that the better staff end up doing all the heavy lifting.

I’ve asked around as to how the awful personnel arrived here and have been told it’s from an era (Howard) when the ATO was recruiting for IT positions and paying well below the industry average. Hence, all the decent IT candidates were not interested…all the 1/2 wits were and this is the legacy we have today.

The PS needs good staff to run effectively. Good staff need to be paid well to retain them.
Tailored packages should be available at all levels not just SES.

@The_RiotACT @The_RiotACT
St Benedict’s in Queanbeyan has been helping locals for more than 15 years, offering meals, friendship, advocacy & support to those who need it most https://t.co/l22RO7R84o (46 minutes ago)