UPDATE: The ABC informs us that the meeting will go ahead after last ditch legal action to stop it was slapped down by Hobart’s Judge Evans who ordered the society to pay costs. 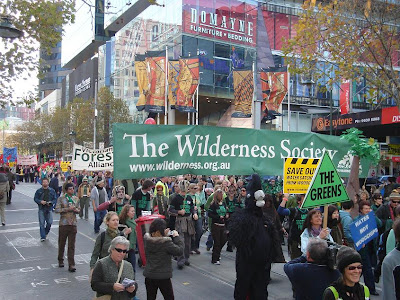 On Sunday 2 May, there’s a general meeting of the Wilderness Society at the National Convention Centre.

Wilderness Society management are growing deeply nervous about this meeting – and so they should. The last thing embattled Executive Director Alec Marr and his hand-picked Management Committee want is for members to find out what’s been going on in this venerable, much loved environmental group.

Last Wednesday, the state offices (also known as Campaign Centres), from WA, Victoria, Sydney, Tasmania, Newcastle and Queensland, created an email to inform members about deep concerns over bullying, questionable use of members’ funds and a serious lack of political traction in Canberra. This was in response to a river of propaganda that had been sent to members from Alec Marr and others in recent weeks. It was too much for Marr, who shut the entire system down rather than allow alternative views to be presented to the membership.

This is the same Alec Marr who in recent weeks has claimed he is the defender of a new system of democracy in TWS. It could be suggested that a democracy that only involves one side of a debate is no democracy at all and is in fact a sham.

And this isn’t the first time Marr has moved to evade the questions and concerns of members.

The 2009 Annual General Meeting of the Wilderness Society Incorporated is now the stuff of legend. Concerns over financial deficits, huge payouts to consultants and jobs for the boys were growing. Many members, keen to ask questions, had written to ask when the AGM meeting would take place. ‘Oh, we’re not having a meeting,’ they were told. Or ‘Oh, we’ll have it next year.’

Letters sent by the Executive Director – demanding assurances that members not attend and seek to vote him out – only got members more determined to rock up and do just that.

Imagine members’ surprise and anger when they found out, two months after the fact, that Marr and 13 others had in fact held the meeting in secret, at 8am one morning in Marr’s Canberra office.

When faced with the fury of members denied their right to vote, Marr’s board stated that it had to be this way. They were protecting democracy by holding a furtive meeting in a location inaccessible to the majority of TWS’s 46,000 members. If anyone else had attended, they would have been ‘rigging’ the meeting. Any kind of move to hold Marr and his cronies to account would have been ‘branch stacking’, they explained.

TWS’s Chief of Operations famously told staff members that the meeting had to be secret because ‘…the people who wanted to attend the AGM had the intention to vote.’

This is logic that would make Big Brother blush.

Fortunately, the Supreme Court of Tasmania disagreed with Marr and his board, taking just two hours to declare the secretive AGM null and void in a hearing on 22 April.

Now, on Sunday 2 May at 4pm, members finally have the chance to restore openness and trust to Australia’s largest green group, by voting in a new Management Committee.

If you’re a Wilderness Society member living in Canberra or Queanbeyan and would like to find out more about attending Sunday’s meeting, please visit the Save TWS website.

Next update in the saga, looks like the executive director has given up first…

ABC is reporting that an AGM will be held in Adelaide tonight.

there are now two people who say they are running the wilderness society… interesting times.

ABC is reporting that the society’s executive director, Alec Marr, says that he is still in control.

Any updates? Apparently there ended up being two meetings … and Marr has threatened to cut off funding to the state branches …

So how did it pan out? Was Marr run out of town like a two-bit manky dog? Can we look forward to a revitalised Wilderness Society with a mandate to take its members on a ownderful rainbow coloured and inclusive journey to irrelevance?

I am impressed with the fact that the savetws website links back to this story.

On the subject of the report, it all sure does sound pretty bloody dodgy. In my involvement of the running of not for profit entities, I understand that there are many challenges. Unfortunately, it always seems to be someone who thinks that they no best who takes a path away from the majority.

Societies can’t just decide to have an AGM behind their members’ backs. You have to send out your notification of AGM to all paying members about a month before you do it. There are very specific laws about how to run a not for profit and I’m not at all surprised that an obscure ad in a random newspaper was ruled illegal.

Then there’s his hilarious joke: “You don’t have to be a f-cking greenie to work at TWS. I’ve got a great big four-wheel drive. But at least I haven’t had a f-cking BABY!” What a jerk! There are plenty of eco-conscious vegetarians in the not for profit sector ready and willing to take his place. They’re professional, altruistic and have no desire to embezzle anything from anyone!

The members are revolting.

Jimbo Lambert - 31 minutes ago
Justo Justo some people have driven that stretch of road for 30 or 40 years at 60km/h. If they suddenly reduce the limit it i... View
Dean Soccol - 2 hours ago
Nathan Grieve in Queensland every time we get a fine we lose points. So if you are one of those that don’t care about the m... View
Nathan Grieve - 2 hours ago
Andrew Nelson not every offence comes with demerit points, so unfortunately that statement is incorrect View
Community 8

@the_riotact @The_RiotACT
Extension of support for #Canberra businesses - especially small #businesses - is welcome, but will it be enough to keep them from disappearing? Local experts have their doubts https://t.co/o4s1D2OGsv (31 minutes ago)