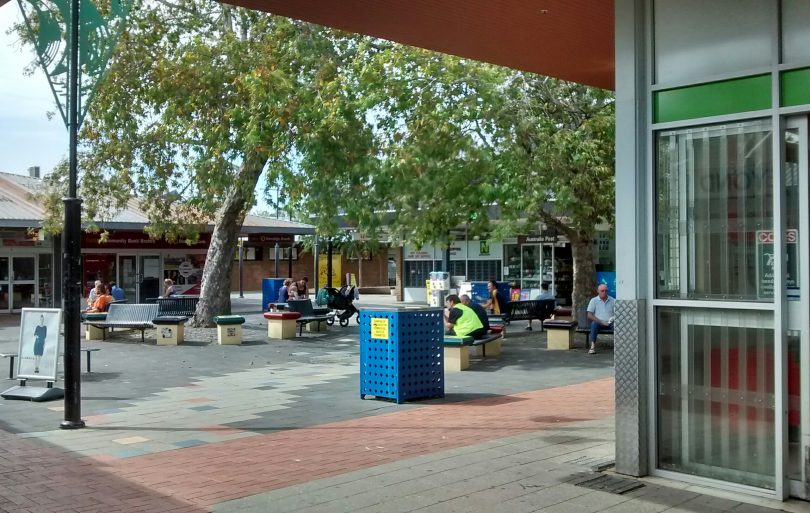 The Curtin shops courtyard. Changes to the draft master plan will mean it won’t be overshadowed. Photos: Ian Bushnell.

Building heights have been reduced to protect solar access to the central courtyard of Curtin shops and setbacks improved to prevent overshadowing of nearby residences in the revised draft Curtin Group Centre Master Plan now out for public comment.

The changes, as a result of the community panel process held from July to November last year, have been described as a win for the community and also include moves to ensure pedestrian areas are retained and accessible at all times.

Minister for Planning and Land Management Mick Gentleman, said the release of outcomes from the community panel process and the final stage of community engagement would ensure the finalisation of the master plan for the Curtin centre.

Key issues raised by the community included the bulk and scale of the buildings and the community use of the public areas, including retention of sunlight to the existing central courtyard.

The revisions to the draft plan also include improvements to the pedestrian and cycle networks and changes to the internal road network.

Building heights will range from one to six storeys across the centre, but two areas fronting the central courtyard will need to be a single storey not more than five metres high. The main retail areas will be two storeys but further levels up to five stories or 18 metres will be considered if certain conditions are met.

Setbacks have also been changed to avoid overshadowing for neighbouring residents, with buildings above three storeys having to be a minimum of 25 metres from Theodore Street, while development facing Strangways Street and above four storeys must be set back a minimum of three metres from the building facade of the floor immediately below.

Mr Gentleman said the changes to the draft master plan reflected a greater priority to open space, the value of the courtyard as a hub, scale of future development and an understanding of the economics of investment in the area. 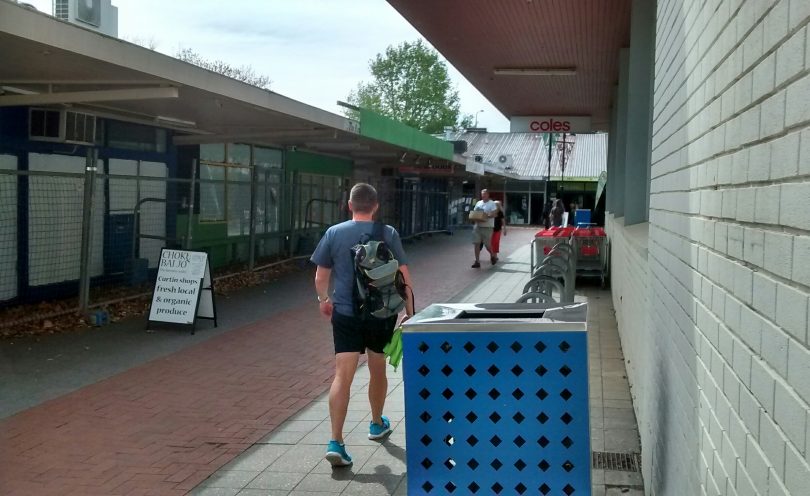 44 Curtin Place, which had tenants including the Q bookshop and Choku Bai Jo, is fenced off.

“While not everyone may agree with all elements of the revised draft master plan, these changes represent a balanced approach to the long-term vision for Curtin. These changes will provide an opportunity for future growth that supports local businesses and ensures that the centre continues to be a place that the community can enjoy,” he said.

The Curtin centre has been in a state of upheaval since the Haridemos family announced plans to redevelop 44 Curtin Place into a six-storey shopping and residential development featuring some 50 apartments, sparking community outrage.

Their original development application was rejected but the family forced the closure and relocation of tenants, including the Q Bookshop, and it is in the process of revising the proposal.

It has also been removing asbestos from the building slated for redevelopment.

Greens MLA Caroline Le Couteur said the proposed revisions were clearly a step forward in some of the things that have been most contentious, and established that there had to be solar access for the main square in Curtin.

“At this stage, I would say it’s a win for the community. The developer has said it’s probably a sustainable way forward and it’s been a very good process from the point of view of the planning department that this improvement has happened,” she said.

A spokesperson for the developer said Mrs Haridemos would consider her options once the consultant team reviewed the master plan but ‘on face value, it looks like the ACT Government has produced a more sustainable plan for the future of the Curtin Group Centre’.

“The consultant team has been working this year on a revised design that is approvable by EPSDD, that closer meets community expectations and that is feasible for the owner. Over the next few weeks, the revised design will have to be tested against the parameters of the newly released documents,” the spokesperson said.

For more information and to comment on the changed draft master plan visit https://www.yoursay.act.gov.au/curtin-group-centre-master-plan-2. Community engagement will close on Wednesday 6 June 2018.

The original objections represented the isolated views of the Curtin Residents Association, which is a collective of individuals with too much time on their hands and no understanding of the commercial realities of operating an asset. The CRAP did not, and do not, represent the views of other residents who would like to see more development in the area, but who are also busy contributing to the economy and lack the time to be serial complainers.

Hopefully a way forward. The stand-off wasn’t reflecting well on anyone, other than those folks who objected to the original plans.

Now, if we could only revamp the tired old Hughes shops. I have a dream about a new Edgar’s Inn, or maybe even just a quaint little wine bar within stumbling distance…

Sean Jones - 17 seconds ago
Amy Jamieson i’m on my way! View
Chris Davis - 55 minutes ago
Hope they check out how Narooma runs it View
Steph Hamleed - 1 hour ago
Melanie Leedham bring the kids to this View
Opinion 46

Steve Hugler - 20 minutes ago
Troy Scott there’s still time for you to make a shot put comeback mate. 3 years and you could be at the Olympics!... View
Liam Timothy-Nesbitt - 2 hours ago
Tariku Fitzgerald-Holmes We’re up there... View
Mark Flack - 4 hours ago
Compare it to a little place call Crookwell in southern NSW ! View
News 35

Dee Kaden - 49 minutes ago
That could almost be 5,400 homeless off the streets!!! View
Slim Hunter - 2 hours ago
Natives or weeds that require watering?🤔 View
Lifestyle 24