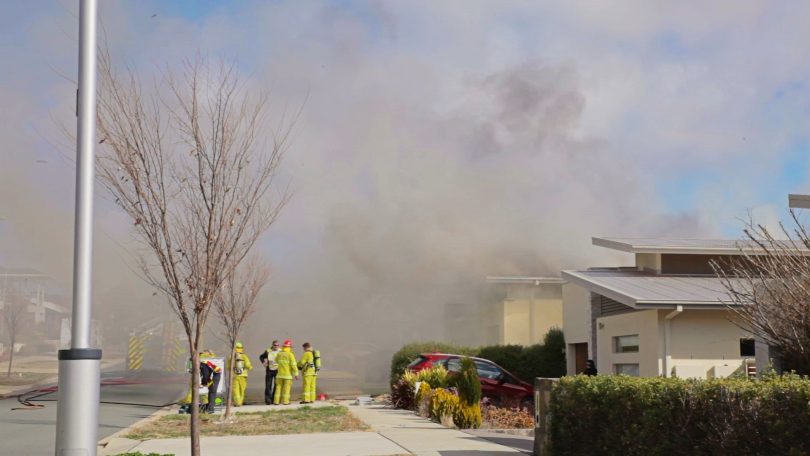 On August 21 last year, firefighters were called to a house fire in Crace which was believed to have been caused by clothes left too close to a heater. Photos: George Tsotsos.

With winter hitting Canberra, ACT Fire & Rescue is reminding residents that heaters and clothes dryers are a major cause of house fires and that care needs to be taken with their use.

ACT Fire & Rescue attends around 250 house fires each year and said that last year house fires caused by heaters and dryers more than doubled – making up 35 per cent of incidents in July.

On August 21 last year, Region Media reported on a house fire at Crace which was believed to have been caused by clothes being left too close to a heater. The fire led to the partial collapse of the single-storey home, with a woman and child taken to hospital.

At the time, ACT Fire & Rescue urged the community to keep heaters well clear of items that might burn – suggesting a minimum one-metre clearance from clothes, bedding and other combustibles. 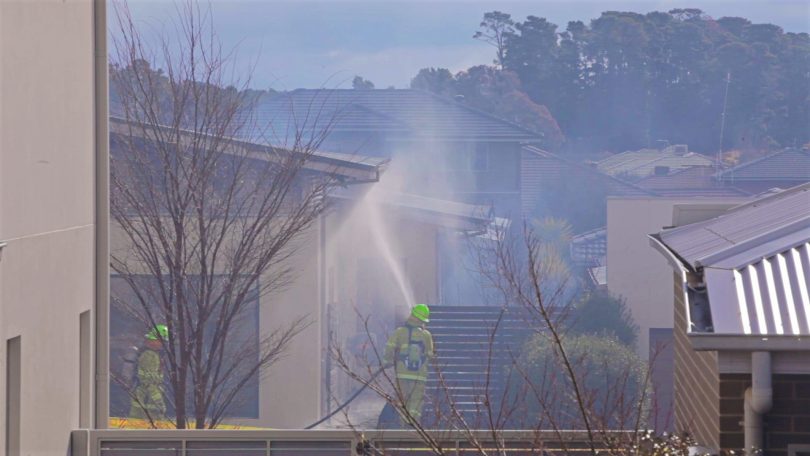 They say it is essential to follow these basic rules when using a heater or clothes dryer:

ACT Fire & Rescue are also encouraging Canberrans to make sure they have a working smoke alarm and to ensure their household is familiar with their Home Fire Escape Plan.

For more information and tips on how to prepare your home for winter and reduce the risk of fire visit www.esa.act.gov.au.

As more home units and houses without backyards for a clothesline are being built in Canberra, more people are buying clothes driers because that is the only solution.

At least the home/unit residents will get a warm feeling too knowing that the electricity will be 100% (ha ha) renewable this time next year.

The reason that many houses have hardly any backyards, is because of all the McMansions being build. If they were the size of houses being built 50 years ago, on the same size block, they would have a back yard. I used to live in a house on a block of land about 450 sq metres. I had lots of room for a full sized clothesline, a large vegetable garden, parking for several cars and some fruit trees. Now people buy those old houses, and get rid of them and build huge houses which fill the block, leaving hardly any garden. The old house was small for a family, although I bought it from a family of five. It could have been extended, or another bit bigger house built, but still leaving some garden room. There is no reason for a McMansion, and I can’t understand why they are allowed on small blocks.

Julie Macklin - 3 hours ago
James Dof And no one has ever expected trades people to cycle from job to job with their tools. That is just a straw man argu... View
Heather Grant - 5 hours ago
Suggest they hire extras from Deane's and Keir's (and anywhere else close by that have spare buses for hire). Instead of look... View
Ashley Wright - 9 hours ago
Cary Elliot Johnson do you have an example of such a city but when defining decent? define it from a daily users point of vie... View
Opinion 47

Amanda Evans - 6 hours ago
Good idea, but what about all the other businesses that suffered because no one was around because of the smoke? View
Adele Craven - 17 hours ago
More effective for workers and patrons would be doing more to reduce vehicle emissions View
Lisa Logue - 22 hours ago
I feel sorry for the staff expected to work outdoors in hazardous air quality. View
News 63

Woman and child hospitalised after fire tears through Crace home

@The_RiotACT @The_RiotACT
The Orroral Valley fire is at emergency advice level & continues to burn out of control nine kilometres south-west of Tharwa Village and 15 km from the nearest suburb at Banks. The Emergency Services Agency said the size of the fire is about 2581 hectares https://t.co/AKjg1MNHZC (2 hours ago)

@The_RiotACT @The_RiotACT
Have you seen #Moruya's Stumpy family and their tribute to emergency services personnel and volunteer firefighters? Here's the full story https://t.co/yZxyiWykBz (3 hours ago)