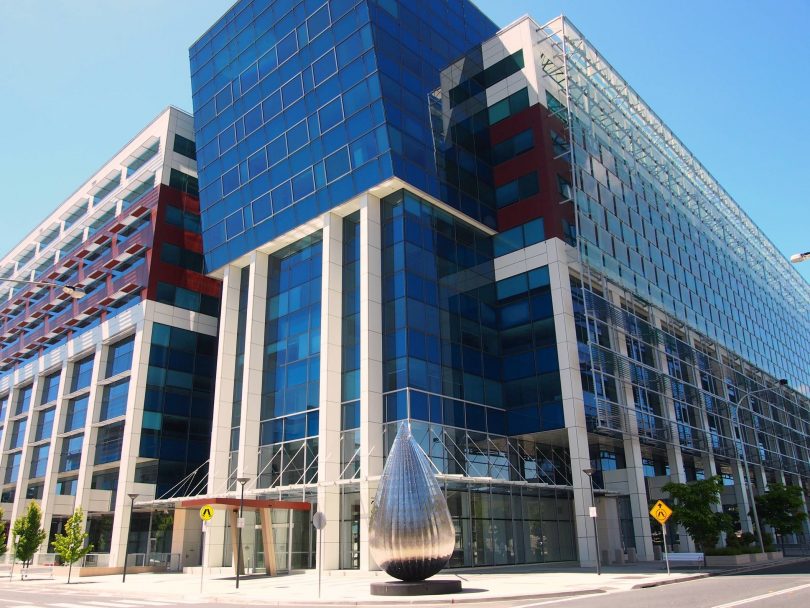 A Woden office building has taken home one of Australia’s top property prizes for sustainable development at the Property Council of Australia/Rider Levett Bucknall Innovation and Excellence Awards in Sydney.

Completed in 2010, the Woden office was purpose-built for the Department of Health and Ageing.

According to the Property Council’s Chief Executive, Ken Morrison, 23 Furzer Street sets a high bar in an industry which already has a world-leading reputation for commitment to sustainability.

“Australia’s buildings are responsible for 23 per cent of our greenhouse gas emissions, and the property industry is fully committed to playing a central role in our transition to a low-emissions future,” he says.

This includes 6-star ratings for energy and water efficiency under the National Australian Built Environment Rating System (NABERS) and a 6-Star Green Star – Performance rating from the Green Building Council of Australia.

The then-new rating represented ‘world leadership’ in sustainable building operations and was achieved through Mirvac’s strong asset management and investment in energy efficiency and renewable energy systems, in close collaboration with major tenant, the Department of Health.

Chief Executive Officer of the Green Building Council of Australia, Romilly Madew, said in 2016 that the 6 Star Green Star rating represented a ‘watershed’ moment for the property industry.

“The industry has become increasingly sophisticated in the way assets are managed and this exceptional achievement from the team at Mirvac demonstrates that a smart, sustainable design can lead to even better, more sustainable outcomes in operation.

“Mirvac has shown true commitment through its sustainability strategy in demonstrating how Green Star ratings for design and construction can deliver a world leading Green Star – Performance rating.”

Mr Morrison says Mirvac’s team delivered a great building in 2010, but did not rest on its laurels. “They continue to look for ways to improve the building’s performance – something that is great for the environment and great for the people who work in the building,” he says.

Mirvac has an ambitious sustainability strategy, This Changes Everything, which is aimed at pushing the boundaries in sustainability and setting new benchmarks for the Australian property industry. The Group has a goal of off-net positive energy by 2030.

Award winners were announced on Friday 17 May at a gala dinner at the International Convention Centre in Sydney. A full list of winners is available online: www.propertycouncilawards.com.au

Seriously? A 9 year old building gets an award now?

Nada Krstin - 5 minutes ago
Zoya, I don’t understand why you even call these people ‘smart’? What makes them ‘smart’ – a uni education or fol... View
News 10

Denise Bourke - 10 minutes ago
Not a blessing for those supposedly buying the homes for aging. Very creative and imaginative but hardly a good match. View
Gary Hatcliffe - 3 hours ago
Get rid of the pokies and I'll rejoin.🤔 View
News 11

John Killeen - 11 minutes ago
At least the new electric fire trucks will always be first on-scene to a battery fire! View
Colin Mitchell - 14 minutes ago
Nick Anderson and they don't have service to... View
Daniel Trevarthen - 2 hours ago
Scott Abela except these ones catch fire even when they are just parked, not even charging! View
Community 5

Warren Warrenson - 14 minutes ago
Those are some big days… carrying packs or with support vehicles etc? View
Xuan Le - 1 hour ago
I wish I knew this earlier.... View
Allan Hill - 3 hours ago
Good one Todd man. Got confidence in you... View
Opinion 11

James Daniels - 33 minutes ago
Steve Ross despite any shortcomings, NSW government support for small businesses has dwarfed that provided by the ACT governm... View
Steve Ross - 4 hours ago
As a NSW resident, trust me, there wouldn’t be any difference, no matter if they were in power! 👎🏿 View
Sport 1

@the_riotact @The_RiotACT
Are you familiar with creepy facts? If so, this ghoulish Ken Behrens #Quiz is for you! It has plenty of spooky stuff for #Halloween, plus a few other bits about Canberra and current affairs https://t.co/kjZY3kTHca (36 minutes ago)