The Centenary Hospital for Women and Children. Photo: File photo.

Work to replace the combustible aluminium cladding used on the Centenary Hospital for Women and Children (CHWC) will begin today (21 February), ACT Health has announced.

It said the Polyethylene (PE) Aluminium Composite Panels (ACPs), which were used as façade cladding on some areas of the hospital, would be replaced in three stages and the work was scheduled to be completed by mid-year at a cost of $1.625 million.

The start of their removal comes six months after it was revealed that the CHWC was decorated with the colourful cladding, similar to that which caused the Grenfell Tower fire in London which left more than 80 people dead.

ACT Health said seven per cent of the cladding needed to be replaced.

Health Infrastructure Services Executive Director Colm Mooney said in a statement that ACT Health had been proactive in identifying any PE ACPs on its facilities.

Mr Mooney apologised for any minor disruptions patients or their families may experience during the works.

“Centenary Hospital is a modern, safe building. It was built and designed to the highest standard. Staff, patients and their families, and the Canberra community can be reassured the building is safe,” Mr Mooney said.

“But this is a hospital. We expect a higher standard. We want the public to have complete confidence and that is why we are replacing these panels.”

Stage 1 will run from 21 February to May 2018. Façade panels will be replaced in the George Gregan Playground and the Paediatrics Patient Playground, which will be temporarily closed. Patients and their families will be kept fully informed about this. Work will also be conducted over the Western Fire Exit, however the exit will remain open at all times.

Stage 2 will be conducted between the “fingers” of the building. There will also be works at the north-eastern corner of the building, near Gilmore Crescent but this is not expected to affect access around the building.

Stage 3, from mid-April until July 2018, will be located at the building’s main entrance. Access through the main entrance will be maintained, except for while scaffolding is installed. Further information will be provided closer to the works occurring.

ACT Health said it had conducted regular fire system checks, increased the frequency of emergency drills and was in regular contact with members of the Emergency Services Agency and the Access Canberra Building regulator.

It said these agencies were confident patients and staff were safe in this building.

ACT Health had comprehensive emergency procedures in place at the Centenary Hospital building, together with a robust fire suppression system to respond to a fire emergency, it said.

Centenary Hospital was constructed in complete accordance with the building regulations and standards at the time, as was the case with all ACT Health buildings.

ACT Health continued to work closely with the Whole of Government Working Group to ensure cross government alignment and consistency in the management of ACPs.

It said Government agencies had been working to identify any government owned or occupied buildings that may have combustible cladding.

Physical inspections of ACT Government buildings (both those owned and tenanted) were continuing to take place to ensure that any ACPs had been installed correctly and complied with all ACT and national building and fire safety codes. 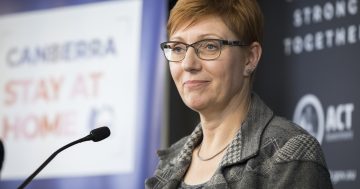