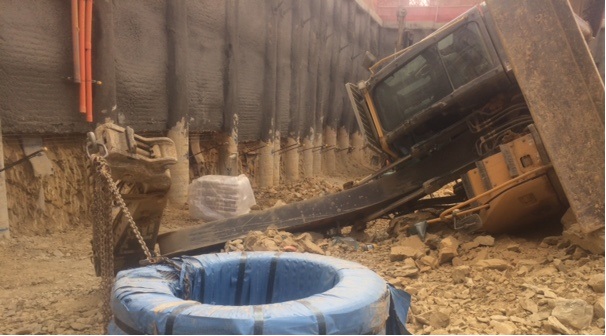 A 15-tonne excavator rolled over on a Civic construction site yesterday. Photo: Supplied.

A massive 15-tonne excavator rolled over on a residential apartment construction site in Civic yesterday with only a seatbelt stopping its operator from receiving serious injuries.

WorkSafe ACT yesterday issued a Prohibition and two Improvement Notices to the excavator’s owner and the principal contractor of the site – stopping the excavator from being used again until safety requirements are met.

According to WorkSafe ACT, at about 11 am yesterday (Wednesday) the excavator was moving a three-tonne coil of stressing cable from one location to another when it tipped over on its side.

WorkSafe ACT said that the surface area which the excavator was operating on was not sufficient, resulting in the excavator sliding down a benched area and landing on its side. 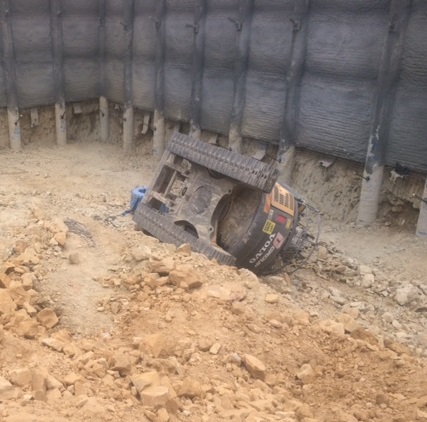 The excavator slid down a benched area and landed on its side. Photo: Supplied.

Acting Director of Workplace Protection Dan Curtin said that it was extremely fortunate that no workers were injured in the incident given the circumstances.

He also said it was fortunate that the operator was wearing a seatbelt at the time of the incident which prevented serious injury from occurring.

“This incident could have caused very serious injuries, particularly considering the size of the plant [excavator] in operation and the type of work being undertaken,” he said.

“Also of concern was that site access and egress was not to a suitable standard and it was agreed during the time of inspection that the Person Conducting the Business or Undertaking would cease all work activities until this was improved.”

Investigations into the incident at the large construction site located in London Circuit are continuing.

Mr Curtin reminded employers and workers across the ACT to slow down and make sure safety remained the priority on sites and in workplaces.

“My message to workers on this site, and others across the city, is not to rush to complete deadlines at the expense of safety,” he said.

Kathleen Lee - 6 hours ago
What! They are historical buildings. Don't be so silly. View
Glenys Callaghan - 8 hours ago
I love these buildings, they represent Canberra to me. I hope they are never pulled down as they are part of Canberra’s his... View
News 11

ChrisinTurner - 9 hours ago
Some of the footpaths in Braddon are still narrow concrete and the rest dirt. View
Business 1

The scaffolding and temporary fences have come down on the corner of London Circuit and Constitution Avenue to reveal the...
Motoring 70