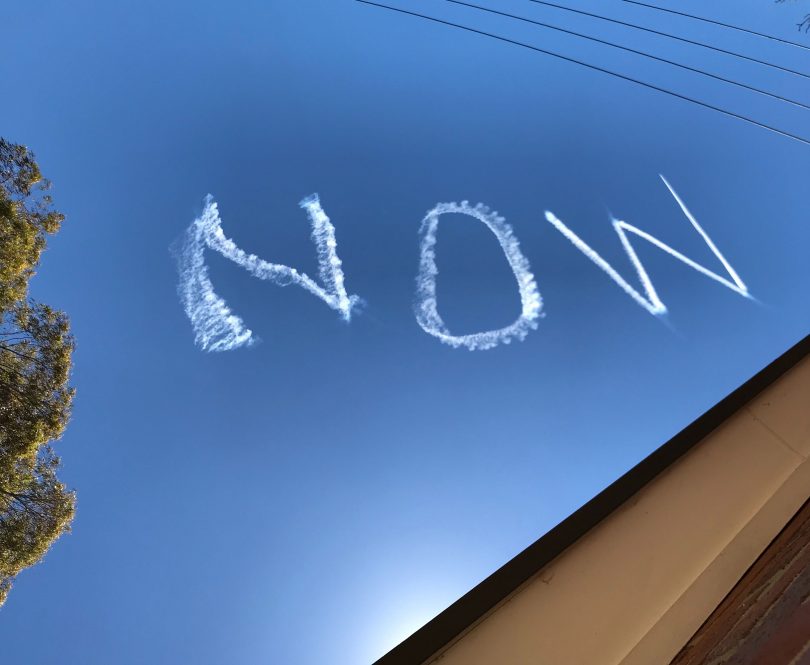 The writing in the sky has ‘now’ been deciphered. Photo: Supplied.

A day after Region Media raised questions regarding the mysterious skywriting that appeared yesterday, it has now been confirmed that the message it was trying to deliver was an indication not to ignore the writing on the wall – or in this case, the sky.

When the word ‘NOW’ appeared in the sky yesterday afternoon (4 December), Canberrans were left unsure as to its meaning, leading to a trail of suggestions ranging from half-written ‘Monica’s to calls for an early election.

That didn’t bother the man behind the skywriting, Dr Matthew Nott, the founder of Clean Energy for Eternity. In fact, he capitalised on the confusion surrounding the word, because it meant that more people would be intrigued to find out what the word meant.

“NOW is a word that we have been using in our climate change campaign since 2006,” he told Region Media. “Particularly in response to Sir David Attenborough’s address at the UN climate change summit, where he used the word NOW pretty powerfully, we thought it would be a good word to sit above Parliament House.

“We wanted to reinforce the urgency for action to happen NOW.” 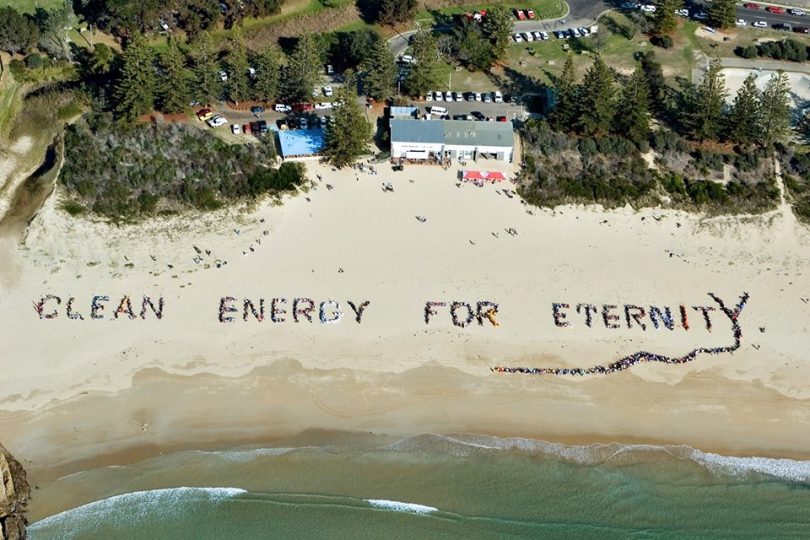 The campaign has created 10 human signs in Canberra and the surrounding region. The goal of the signs, which could be read with ease from an aerial point-of-view, was to send a message to the nation’s political leaders.

“In 2006, we had 3,000 people on the beach in Tathra to form a human sign. Tathra is a town of 1,200 people so we nearly tripled the population of the town for the day just for that human sign,” Dr Nott said.

“We have been campaigning for climate change before anyone was talking about it.”

Since the formation of Clean Energy for Eternity in 2006, a total of 450 kilowatts of solar panels have been installed in Tathra. Every community building in the town has been fitted with solar panels: from the surf club to the bowling club, to the school and Aussie Rules club, all as a result of community fundraising.

They have also built Australia’s first community-funded solar farm, which was built in the shape of the word IMAGINE. In February, the community is meeting to vote on a 100 per cent renewable energy target by 2030. 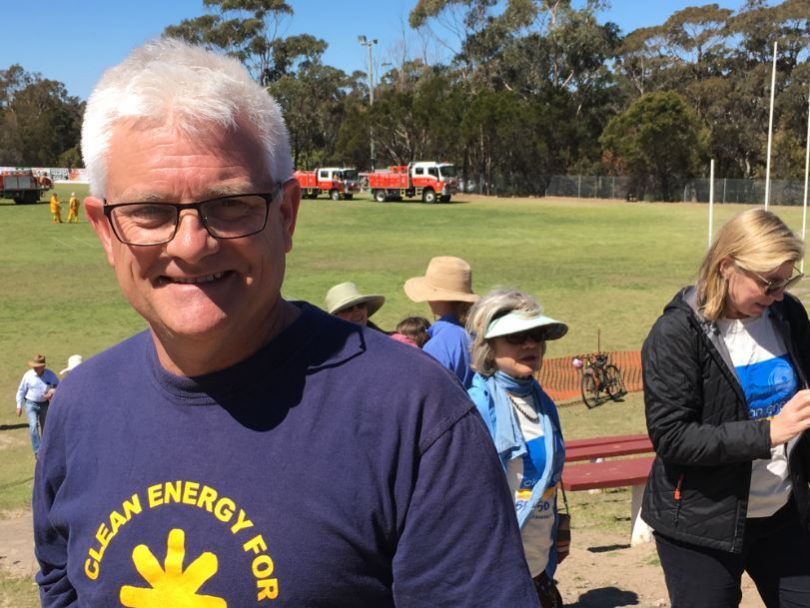 Nine months ago, the town was nearly wiped off the map by devastating bushfires on 18 March. The day went down as the hottest day ever recorded in March, and Dr Nott said the town is still reeling from the fires and the community is feeling vulnerable.

Sixty-five homes were destroyed on that mid-autumn day and the tragic day has invigorated the town to advocate for climate change.

“I am disgusted by the fact that our country has no strategic approach to reduce emissions. It is a neglect of their duty and I think avoiding a threat is not the Australian way,” he said. “I think it is pathetic.” 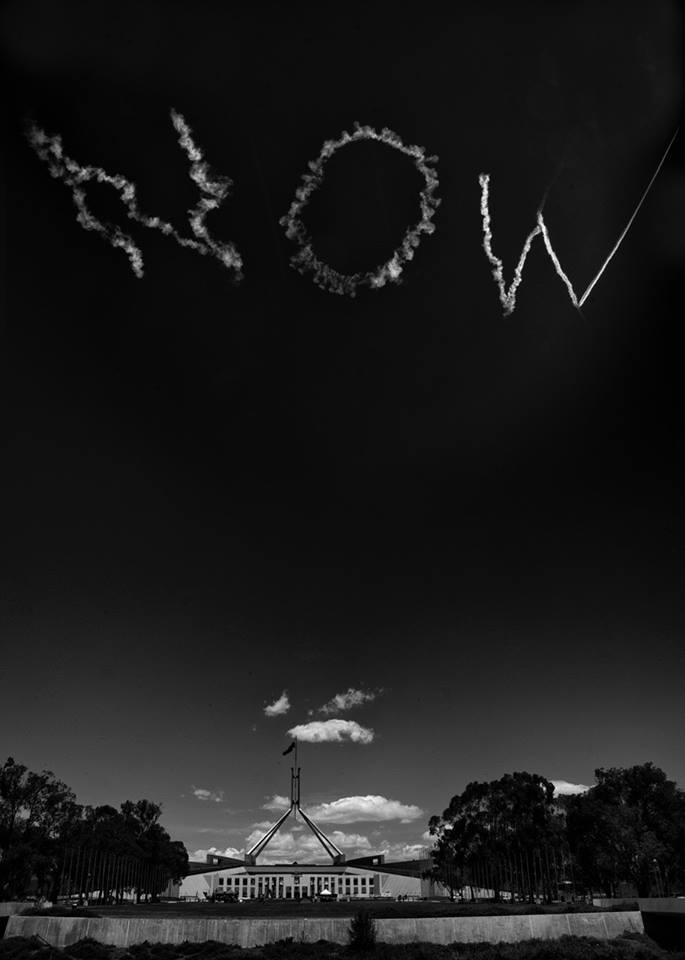 According to the article the word has been used for 12 years in a campaign I have never heard of, apparently with no effect.

Also, trying to link “climate change” to the Tathra bushfire (or any others) is disingenuous.

Maybe NOW is the time to call it a day.

On the contrary, climate change and the recent devastating bush-fires in Tathra, QLD & California are absolutely linked. https://www.science.org.au/curious/earth-environment/how-climate-change-increases-bushfire-risk

Hey Capital Retro, thanks for the feedback. You may never heard of our campaign, but I guess you have NOW. Our campaign has helped get 450kw of solar onto roof tops in Tathra. We have built Australia’s first solar Sculpture (IMAGINE) and have been involved in over 100 human signs. We have set up 6 surf clubs and 12 RFS sheds with solar along with churches, town halls, and many schools. I’d love you to come to a meeting in Tathra on 19/2/19 at 6pm. We will be asking our community to vote for a 100% renewable target by 2030. John Hewson and Prof Andrew Blakers from the ANU will be guest speakers, telling us how we can do it. So, Capital Retro, you’ve heard of us NOW. We are just getting started. I’d love to talk to you about bushfire risk in a warming planet. The CSIRO has had a lot to say about that. Perhaps another time. Matthew

Hey Retro, thought you might be interested in this. It came together pretty well don’t you think? https://youtu.be/h6L6BiBmsqI

Hey Retro, 10 NOW signs. I’d be interested in your feedback. Someone from Moreton Island in Queensland just sent me an 11th. https://youtu.be/q_tD8_jVAig
We are starting a revolution down here. This is not the last you’ll hear from us.