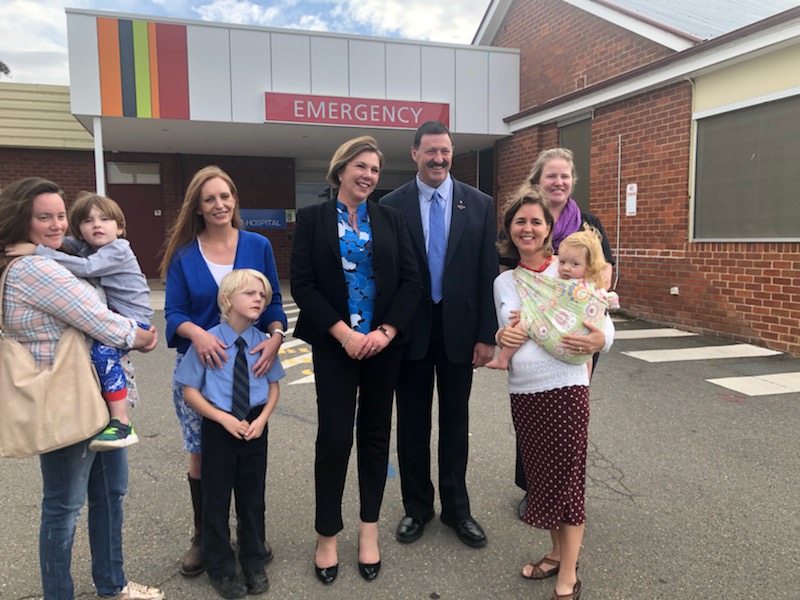 Mike Kelly and Catherine King at Yass Hospital with local mothers and their children. Jasmine Jones is at front right. Photo: Supplied.

Yass Valley women will soon not have to travel to Canberra to give birth if Labor is elected on 18 May, with a $4.7 million pledge to restore maternity services to Yass Hospital.

In a joint statement, health spokesperson Catherine King and Member for Eden-Monaro Mike Kelly said the new maternity ward would include a fully fitted-out birth room and a postnatal room for overnight stays.

“Yass is expected to grow to almost 30,000 people by 2036. Improved medical services will be integral for the future of the town,” they said.

“Expecting mothers from Yass and surrounding areas are currently forced to travel up to an hour to give birth either in Goulburn or Canberra. This investment will mean that mothers can give birth closer to home.”

New South Wales’ Southern Area Health Service closed the maternity ward at Yass Hospital in 2004, and there has been a push ever since to have it restored.

NSW Labor promised the same amount to restore the ward if it was elected in March, but NSW Minister for Health, Brad Hazzard said then the pledge was irresponsible and that the model proposed was unsafe.

Ms Jones, who has been campaigning for a new Yass Hospital with a maternity ward, welcomed the announcement, saying that with 200 women already having to cross the border to give birth each year and the valley growing in population the situation was only going to get worse.

She herself had given birth on the side of the Barton Highway on a dark winter’s morning in an ambulance that had been speeding toward Canberra with her husband following behind.

“We’re all running the gauntlet across the border,” she said.

Ms Jones said women were stressed and exhausted having to manage the distance, not just for birthing but pre and post-natal care. The situation was resulting in unnecessary intervention and complications and some were spending thousands of dollars on accommodation in Canberra to avoid the strain.

“It’ll still be up to the State Government to deliver the service but having the infrastructure, having a midwifery model and low-risk birth unit at Yass means women can give birth in their local community,” she said.

Ms Jones said the Yass Valley population was 17,500 with 2.9 per cent growth a year and the Council had an aggressive settlement strategy.

“Put in double the amount of young families and you’ve got a recipe for disaster if there is no infrastructure,” she said.

She dismissed Mr Hazzard’s comments as election-driven, saying NSW Health delivered low-risk birthing units across the state all the time.

“This investment blitz – one element of Labor’s $2.8 billion Better Hospitals Fund – is a key part of Labor’s Fair Go Action Plan to improve health care and strengthen Medicare,” she said.

Paul Regan - 3 minutes ago
And the total panorama is spoilt by a couple if trees that have been allowed to grow too tall. That said it is the same fir a... View
Michelle Lussick - 15 hours ago
Robyn Whitney Soxy’s Hut we knew it as. View
News 5

Capital Retro - 2 hours ago
Young people in the building trade can certainly earn heaps as labourers. The problem is that when they are 40yo they are cla... View
Kevin Hodder - 4 hours ago
Xavier Drewitt that's one trade and no shortage of apprentices for that reason, View
Xavier Drewitt - 4 hours ago
37ph + travel ain’t bad for a mature first yr sparkie View
Business 3

Capital Retro - 2 hours ago
This will last until the next pandemic. View
News 2

chewy14 - 3 hours ago
Or just like our own ACT government. No dramas, reelection is almost guaranteed no matter how badly they stuff up or waste mo... View
Stephen Saunders - 5 hours ago
I do feel a twinge (not an avalanche) of sympathy for Our Gladys, who cannot possibly emerge from ICAC unscathed. She should... View
Lifestyle 21

Andrew D'Arnay - 6 hours ago
We live in a free society where you can make your own choices, this is the greatest thing about living in Australia, but thos... View
Elise Kleeman - 14 hours ago
Kriso Hadskini he doesn't have to share anything. Simply refuse to show evidence, of course you would show if you had it so a... View
Peter Marshall - 17 hours ago
Wayne Martin the long term effects of the polio vaccine aren't known. Everyone might drop dead seventy years after receiving... View
Community 75

Dean Buckley - 7 hours ago
Better put some up David View
Doug Jackson - 16 hours ago
Really bad plan. If you need a fence then you may not be paying appropriate attention to your child. Even with a gate somebod... View
News 1

Queanbeyan council brings out the rule book for upcoming by-election

@the_riotact @The_RiotACT
A group of dedicated #community volunteers in #Weston have banded together to rejuvenate their local Fowles Street park from being overgrown with weeds to becoming a haven for local wildlife https://t.co/CYxMTTXITF (2 hours ago)