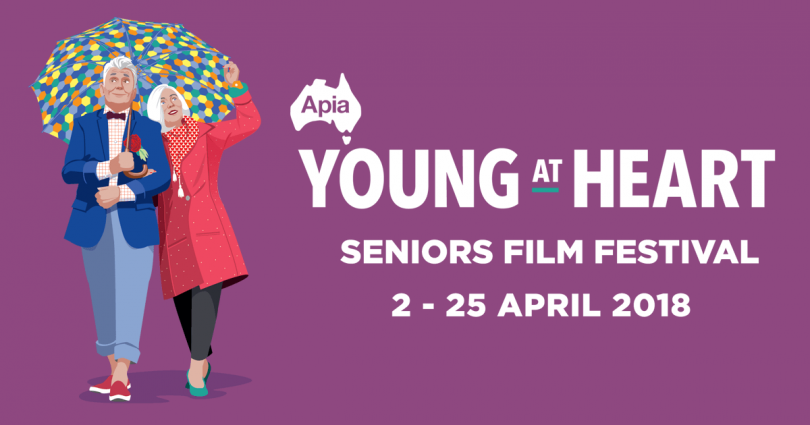 Thanks to APIA and Palace Cinemas, the Young At Heart Seniors Film Festival returns to Canberra this week from Monday 2 April – Wednesday 11 April.

Palace Electric Cinemas will showcase 16 handpicked films from across the globe, with a view to appeal to over-60s in particular. Comprising the 13th edition of this national festival are 13 new releases – 5 of which will enjoy their Australian Premieres – and 3 retrospective inclusions which tip the hat to some of the greatest leading ladies to ever grace our screens: Bette Davis, Judy Garland and Dame Maggie Smith.

Getting underway Monday 2 April, there will be four screenings each weekday, along with three screenings on Saturday and Sunday. For the retirees with perhaps more free time during daylight hours, the scheduling is devised for as much viewing as possible.

The Opening Event of the festival will be a screening of The Bookshop, preceded by an afternoon tea. Starring Emily Mortimer, Bill Nighy and Patricia Clarkson, this 1959 period drama is about one woman’s (Emily Mortimer) quest to open the first bookshop in a parochial small town, not to mention both the allies she makes (Bill Nighy) and the resistance she meets (Patricia Clarkson) along the way. Her efforts to literarily enlighten the townspeople will create some socio-cultural upheaval. Afternoon tea from 3 pm, screening from 4 pm. Tickets for this special event start from $18.

Enjoying their Australian Premieres are Chappaquiddick (2017) – the stranger than fiction true-life tale of the 1969 Ted Kennedy car accident which led to the death of campaign worker Mary Jo Kopechne; and LBJ (2017) – Rob Reiner’s (A Few Good Men) political biopic which charts President Lyndon B. Johnson’s (Woody Harrelson) struggle for legitimacy after being thrust to power before a grieving nation in the wake of JFK’s assassination. Richard Jenkins (The Shape of Water) and Jennifer Jason Leigh (The Hateful Eight) also star.

Last Flag Flying (2017), Richard Linklater’s (Boyhood) newest affecting and reflective dramedy, follows three aging Vietnam war veterans on one final mission – the road-trip burial of one of their sons following his death in the Iraq War. This Australian Premiere which stars Bryan Cranston (Breaking Bad), Laurence Fishburne (Madiba) and Steve Carrell (The Big Short) is already worth a look on the strength of its director and stars alone.

Return To Montauk (2017) follows author Max Zorn (Stellan Skarsgård) as he returns to New York to promote a novel inspired by the demise of a passionate affair he once had there 17 years before. However, he meets the very muse of this sensuous story once more and the question beckons of whether or not to let this love rest. Australian Premiere.

The Boy From Oklahoma is the first of three true-life tales. This Mexico-doco is the effervescent tale of vibrant and visionary artist Anado McLauchlin. Born in Oklahoma, he wends his way through San Francisco, New York and India over the course of his life before finally settling and opening a sculpture garden and gallery just outside a Mexican village. Australian Premiere of this ode to colour, style, identity, sexuality and, of course, Mexico.

There’s even a curious little gem from Italy thrown in – a perfect documentary accompaniment to your panettone combo (read on) – entitled Sea Dreaming Girls. This Italian Full Monty/Calendar Girls mash-up champions the undying dreams and zest for life of an aging group of gregarious grannies.

The third and final festival documentary is the home-grown Gurrumul (2017). As the title would suggest, this is an evocative audio-visual overview of the life of locally-lauded blind indigenous singer-songwriter Geoffrey Gurrumul Yunupingu.

Five-time Academy Award winner All About Eve (1950), iconic showbiz drama A Star Is Born (1954), and Maggie Smith Best Actress Academy Award-winning The Prime of Miss Jean Brodie are the three throwbacks to round out the festival line-up.

All standard screenings are $8 for Palace Golden Movie Club members. Movie-goers can also enjoy a couple of special food and beverage deals: $10 prosecco and panettone or $5 coffee and panettone.

Pick up the Official Programme at Palace Electric.

Kasra Mn - 1 hour ago
At what $$ point is someone wealthy? View
Anita Patel - 2 hours ago
An excellent article. View
Sher Young - 9 hours ago
Wealth is alway about $$$ View
Community 10

Anne O'Hara - 4 hours ago
Hannah Zurcher I have no problem with workers going for what they think they are entitled to, I do have a problem with them p... View
Nathan Lofthouse - 5 hours ago
Sorry who else is pulling 4% p.a ? View
Keran Niquet - 16 hours ago
As usual Pinkas has got his head up his backside. Community support for his selfish actions is non existent! View
Community 1

MERC600 - 12 hours ago
What will be of importance is how the Feds look at electric powered vehicles. Fuel excise is a great earner for the Feds.. Ev... View
News 38

Zoe Walker - 12 hours ago
It has been a very wet season resulting in unprecented growth compared to the last decade. The mix of people staying at home... View
News 20

Amanda Biggs - 12 hours ago
Very disappointing. This will be devastating. View
News 3

jwinston - 15 hours ago
It would if it was rainbow coloured and all the legless lizards - oops, I mean handi-capable lizards - were all accounted for... View
Capital Retro - 16 hours ago
Amazing progress being made on this project. It couldn't happen like this in Canberra. View
Community 3

Therese Maree - 16 hours ago
So lovely! People are so clever and creative, thanks for sharing this story :) View
Breaking 4

ssek - 16 hours ago
Can Fair Work finally do the right thing and remove their protection? They are striking over a demand for an unreasonable pay... View
mitch82 - 18 hours ago
Let's see if Labor help the community as a whole or just their union mates/donors. I want my rates back.... View
News 33

Clare O'Rance - 18 hours ago
Great idea with so many women needing housing support. I wish YMCA all the best. View
Ian Hubbard - 18 hours ago
Good point Brent. Unfortunately the business model for community and sporting facilities is no longer viable. Like newspapers... View
Brent Hutch - 1 day ago
Ian Hubbard places come, places go. I guess no one catches up with each other these days because the Bowlo went... Or perhaps... View
show more show less
*Results are based on activity within last 7 days

@The_RiotACT @The_RiotACT
Readers are neck and neck on accepting hotel quarantine travellers in Canberra. And should we levy a road use charge on electric vehicles? https://t.co/tqBnt0sX2e (4 hours ago)

@The_RiotACT @The_RiotACT
Here are our top ten picks for your week ahead, including plenty of music and a fascinating talk from Sir Peter Cosgrove https://t.co/9liIXAVWGu (5 hours ago)

@The_RiotACT @The_RiotACT
The DA for the Fyshwick waste plant is going ahead after the government refused requests to talk to the proponent https://t.co/5dJmVGXVLj (7 hours ago)