I got this email today, I don’t even know how I got on to this mailing list…

â€œHowâ€™s the serenity?â€ asks Darryl Kerrigan (Michael Caton, â€œThe Castleâ€) whilst on holidays at Bonnydoon. He and his family had to go on holiday to escape the everyday reality of aircraft noise over their home.

In Canberra, we have the serenity in our suburbs now, because jet planes arenâ€™t allowed to fly over our homes â€“ instead they fly over rural properties north and south of the airport. But if houses are built at Tralee directly under these flight paths, it wonâ€™t be long till they complain and try and move the noise back over Canberra like it was before 1995 â€“ see below. Like the Kerrigans, you will need to go on holiday to escape the aircraft noise.

So, tell us what you think by emailing us at noise_feedback@canberraairport.com.au so that we can pass your views on to those that can stop this stupidity.

If you know anyone that lives in the suburbs below or who doesnâ€™t like aircraft noise, please pass this email on to them and get them to act. 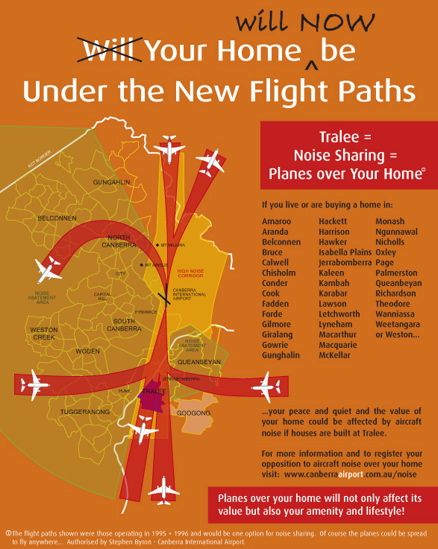 Dusty is right I think – I seem to recall that Canberra’s winter fog was an issue when the freight hub was first discussed. Perhaps the airport entrepreneurs are confident that climate change is putting paid to the fogs.

Well if it is on one of the maps that I have pointed you to let me know the point and how loud it is. Good to know if Snow and Byron make more threats about noise sharing. (BTW I have checked the Sydney airport landing maps a nd they all turn in for final approach 10nm out – so much for THAT noise sharing).

They already turn over my place. In fact, since returning, I’ve noticed a lot more planes at all times of the day, some even heading outwards (used to be incomings only). They turn over the mountain I’m on.

I performed a little experiment:

Went and parked outside the entrance to Fraser Park Speedway with my sound meter. Background noise was less than 40dB with the occasional motor bike on Lanyon drive registering around 50dB.

On most Airservices Australia on the link above, this equates to a point on the landing path of around 7nm out from the end of runway 35.

This point is about 1600m from the nearest house in Jerrabomberra. Most aircraft are 1500 to 2000 feet above ground level at this point.

Ah – we seem to get a lot of smaller planes (sometimes very low and loud), and helicopters.

Scroll down to Canberra. You’ll see Ant that they will turn over your place.

seepi: I don’t know, I’m just looking at the charts with the defined traffic routes in and out of Canberra. Clouds wouldn’t be an issue, they just fly through them. Sometimes air traffic control will vary an aircraft’s route to cater for other traffic, but since we’re talking about general traffic and not one-offs, generally they should follow those routes. (Also, we’re talking jets, non-jets have slightly relaxed rules.)

Perhaps the plane is just on the other side of Mt Majura, but since you’re in Hackett it appears that they are over you?

One thing I do know is that ATC is red-hot on noise-abatement, it would be rare they would vector aircraft to infringe the noise-abatement areas unless they really had to due to, say, the weather. ATC *hate* getting noise complaints, pita for everyone. Also, things like VIPs, police and emergency, and the military can get non-standard routes.

Sorry, i was wrong, you don’t pay for the CAG Privileges card. My colleague informs me it’s a very worthwhile idea.
But f*** that.

Anyway our pea-souper fogs put a halt to all air traffic right through winter. ha ha.

Planes already fly over my place in Palmerston on their Melbourne/Adelaide/Perth runs. Not a bother at all.

I lived in both Palmerston and Kaleen and distinctly remember aircraft flying over both houses. Am I missing something here?

I like the way the statement blithely says that planes currently go over rural properties to the north and south. Actually, rural areas in all directions cop the planes. My hill to the east of canberra is a turn marker for planes, normally from about 4pm onwards, but if the wind is right, they come over all day. In fact, it seems to already be on their Map of Horror (the turn over Googong). So it’s OK for everyone EXCEPT the Suburbs of Serenity to cop Canberra airport noise, apparently. Nasty attitude.

Of course, the big issue they don’t mention is that it won’t be 747s at 6am. They’ll be coming over at 2am, and any other am that they want to because unlike sydney airport, Canberra has no curfew!!!!

and THAT is why Snow’s Shambles are fighting Tralee so strenuously. They have a lot more to lose if planes have to start coming in over Canberra. Their lovely fat nightime/dawn window of opportunity.

Jemmy how come we already get quite loud aircraft taking off over our house in hackett then? And a lot more some weekends, and some evenings (I imagine when there are clouds they are going around.)

oops ..sorry about the double up. (Hiding back in hole)

Pandy is right, that graphic is very misleading. I can’t find public access to the charts so that you can see what I’m talking about, but the noise abatement procedures and the standard departures for jets show Tuggeranong wouldn’t be overflown, nor would North Canberra. (I presume we’re really only concerned with departures since that’s when the noise is, but arrivals are similar anyway.)

(Anyone know why Airservices seem to have shut public access to the SID/STARS?)

Hell if the houses are cheap enough I’ll move there. There’s bigger issues in life than a bit of noise folks.

Bring on the noise!

Why does everything aftr “i.e.” get trimmed?

If the jet does turn west above Hume to travel to Melbourne/Adelaide will it thus be told to fly over southern Tuggeranong south of Isabella Drive, or will the flight path be jinked to fly slightly to the west over Mt Rob Roy. This is what happens right now right? This avoids all of Tuggeranong right? This results in hardly any aircraft noise right?

So I repeat again, tell us what the actual air paths would look like for commercial jets thanks and maybe then I will start to become afraid.

Chooky Whittaker - 3 minutes ago
Maria Hawke make sure you show all of these comments to dad ❤️ View
Mark Mcconnell - 56 minutes ago
Living legend 👍👏💯 View
Erkin Esen - 5 hours ago
Great story , Allen and Maria most beautiful people i ever know ,... View
Community 13

Don Cameron - 1 hour ago
I totally agree. Thought of this last night but don't know who to contact. It seems like a sensible idea. These people have v... View
Fenji Stradwick - 10 hours ago
Andrew Dale ahhhhh, like they get to cuddle up with a big fluffy bear during it. Gotcha😂... View
Andrew Dale - 13 hours ago
Fenji Stradwick it's just a softer way to say isolation View
Food & Wine 18

Chris Ellis - 4 hours ago
Trev Astle I’m not aware that tradies are doing it tough atm. Certainly seems to be lots of activity.... View
Chris Ellis - 4 hours ago
Elroy Jones what percentage of people in Canberra go to the football? Not many I bet. So why should we pay for yet another st... View
Max Kelty - 5 hours ago
Which 'best' stadiums are near the city? Only the SCG in Sydney and I'd hardly call that a good one. Most are in outlying are... View
Opinion 12

Gloria Murphy - 5 hours ago
Mark Katalinic That person will be bored wherever they are!! View
News 64

Suz 'olmes - 18 hours ago
How about something nice? Invest some money to clean up the tavern and make it more family friendly or a space for cafes. No... View
News 2

HiddenDragon - 19 hours ago
Following on from the useful perspectives set out in Julie Macklin's comments last night, there are serious traffic issues at... View
show more show less
*Results are based on activity within last 7 days

UPDATED - 4 August: One man has died following a car fire on the Kings Highway, west of Nelligen, near Batemans...
Breaking 39

Canberrans are being prepared for the prospect of wearing a face mask out in public after ACT Chief Minister Andrew...
Breaking 0

Canberra has returned to COVID-19 territory once again, as the single remaining active patient was today declared free from the...
*Results are based on activity within last 7 days

Canberra homeowners will be able to obtain interest-free loans to boost the energy efficiency of their properties under a re-elected...
Breaking 39

@The_RiotACT @The_RiotACT
Satin bowerbirds are a delight to find in the garden, writes Ian Fraser. But how do you know which are male and which are female? https://t.co/nlG6YquR9G (21 minutes ago)

@The_RiotACT @The_RiotACT
The Mercy Walk between Boorowa and Galong has turned into an institution, as participants raise much needed funds for Karinya House. The spectacular morning tea is on hold for this year, but the virtual walk will go on https://t.co/9ZXA1gGc3h (1 hour ago)

@The_RiotACT @The_RiotACT
Emergency services are on the scene of a serious accident that has closed both lanes of the Princes Highway north of Batemans Bay this morning https://t.co/7wg8XEurdU (2 hours ago)