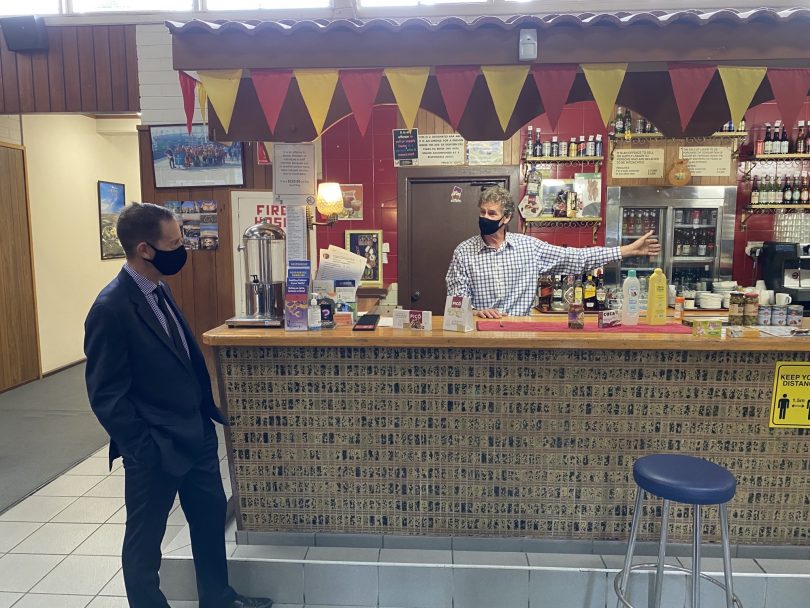 Minister for Gaming Shane Rattenbury with Spanish Australian Club treasurer Chris Lander. Mr Lander says the club will upgrade its kitchen thanks to a grant devised to move away from poker machine revenue. Photo: ACT Government.

Six community clubs in the ACT will share in almost $1 million in funding to help diversify their revenue streams and source income from places other than poker or gaming machines.

The $943,000 boost will go towards initiatives such as installing solar power, upgrading bar and lounge facilities, renovating kitchens, improving accessibility, even site preparation for the development of a childcare centre.

One successful grant recipient – the Spanish Australian Club in Narrabundah – will use its share to renovate and upgrade its existing kitchen into a modern commercial space so it can offer food services.

Club treasurer Chris Lander said the current ageing kitchen had been an obvious choice to upgrade because it no longer complied with current regulations.

He said diversifying the club’s revenue streams could help build a more stable income down the track. But he wasn’t sure if the club could be totally viable without poker machines – not in the near future anyway.

He described poker machines as an “integral” part of the club’s entertainment.

“Some don’t like that term ‘entertainment’, but in 2018 I surveyed several active players and their response was ‘if you remove them, we’ll go the big clubs in Woden’,” Mr Lander said.

However, he has since noticed the club’s poker machine revenue is a diminishing form of income as the games become less popular with younger club-goers – a change he partly attributes to the increase in online gambling options.

Mr Lander said these changes had motivated the club to move away from poker machines into different streams.

“We opened a delicatessen in the club which operates once a month and we’re bringing in a movie theatre type space. We’re also looking at sports activities including a gravel bowls game,” he said.

Minister for Gaming Shane Rattenbury said the government had a clear agenda to minimise the reliance on poker machines, while ensuring the long-term survival of community clubs. 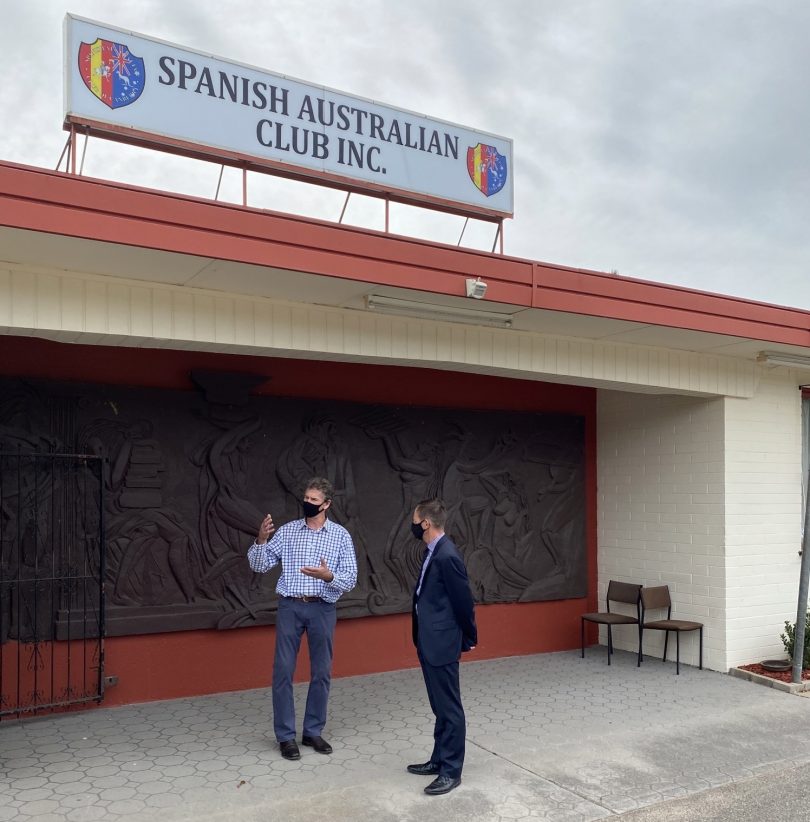 He acknowledged it wouldn’t be a quick turnaround to move away from a dependency that had developed over a number of decades, and each club’s journey would be different.

Some clubs in the ACT rely on gaming machines for 30 per cent of their income, others receive more than 60 per cent.

Mr Rattenbury said larger clubs had been better able to diversify from gaming machines by divesting into real estate or health groups, but this had proven more difficult for smaller ventures.

“I’m very encouraged by the fact clubs are now actively discussing the need to both reduce the harm from poker machines and think about how to diversify their revenue,” he said.

The ACT Government matches contributions made by club gaming machine incomes to create the fund.

The Labor-Greens governing agreement holds the government to a commitment to reduce the number of poker machines to 3500 by 1 July, 2025.

Mr Rattenbury said significant progress had already been made with the number of machines in the Territory down to 3800 from more than 5000 in 2016.

“We are within reach of that goal but we will need deliberate policy measures in the next couple of years to reduce those further 300 licences.”

He said there was the potential to go beyond this target and was keen to see some clubs explore the idea of going completely poker-machine free to provide a “choice of venues for Canberrans”.

Watch everyone just go over the boarder to Queanbeyan to play the pokies if act got rid of them all. As it already is ACT Clubs donate a large percentage back into the community for sport & rec.

Yet Labor owned clubs increase their pokies as this funds the greens and labor in the ACT. They are addicted to the revenue that the misery machines gives them

it is important to note that nearly $1M a year is contributed to the fund by the Club industry itself, every Club contributes either $20 or $30 a month (depending on the amount of machines the Club has) the money is administered by Justice and community services and applications can be made by clubs to diversify or for sustainability. just think this is important so tax payers know that the majority of the funds are self created

They will need a grant to support the political donations soon

How are they going to wean the ACT Labor off the political donations gleaned from poker machines?

Chris Cummins I was in the Canberra Labor Club at Belconnen about a month ago. No sign of them weaning themselves off the bandits.

I totally agree that no one wants problem gambling but as we all know – pokies are only part of the problem. Where are the limitations and restrictions on other gambling activities (TAB etc). ? The clubs have had their tax’s go through the roof and the number of machines reduced (which i don’t think is a bad thing) as part of a “harm minimization” initiative. As this has been in place for over 5 yrs, when will the gov’t share the results and impacts that this initiative has gleaned ? (and i hope it is good news)

Great move! And really good to see the support to find alternatives.

If they can have plain package cigarettes, why not plain package pokies? No bells, no flashing lights, no buttons. Just a plain metal box on the wall that you can put money into and might, but probably won’t, spit money out.

Greg Oakes there is usually a room nearby with these in. Not metal though, usually white ceramic, with 1 or 2 buttons on top. They even wash your money before they pass it on to someone more worthy!

Cynically: an attempt for Labor to win back Clubs ACT before AB moves on.

Jay Fox I didn’t know there was an upstairs room. Ya learn something new every day!

Pammy Howarth it was such a great little venue!

About time act govt had some teeth. Other states limit the number of machines to reduce dependence on thier revenue.

Do all those people who want to ban these machines also boycott Woolworths (the biggest owner of pokkies in Australia)?

Lisa Bishop sadly have to agree with you. Most people are totally unaware.

William Mudford me too but so far hadn’t found anyone else that does it too. Thank you

I boycott Woolworths and Coles.

I think that you’ll find that Woolworths divested their pokies, pubs and liquor stores last year. These are now owned by Endeavour group. 🙃

Richard Pratt is this article no longer valid. I can’t find anything to refute it.

if you read your article it states “Truth be known, ALH, now part of the broader Endeavour Group, has more poker machines than Crown and Star combined.”

Richard Pratt I know – I saw that! Sadly, gambling adversely affects too many families and, in my opinion, doesn’t receive enough monitoring/action. But considering everything else happening in the world…

Ban the machines. How did clubs survive without them years ago??

Get rid of em.. stealing people hard earned dollars knowing it’s a mental health issue to keep throwing money away when you have very little.. if people wanna gamble let them go to the tab or the cas.. simple

Kimmy Hunter That’s really awesome for you and I hope you continue to be OK. 50% of people who play pokies in Australia are addicted to it, and a quick Google tells me that 1 in 5 attempted suicides is related to pokie debt. In just NSW in 2019, pokies kept $6.5 billion in profits.

There’s alot of problem drinking too but they don’t regulate that as much .. they don’t tell pubs how much alcohol they can sell. I just don’t like the nanny side of it. You can’t force people to get help and they will just find other ways

Kimmy Hunter It’s literally illegal to sell alcohol to someone intoxicated. They do tell pubs how much alcohol they can sell.

Kimmy Hunter that’s everyone, who plays them..

Make the machines silver coin only.

Corey Karl,it would slow down the gambling process and limit input making them less attractive to problem gambler’s ,and make them less viable for clubs,ergo, needing them to look for alternative income streams other than gambling.

So are they reducing the amounts of poker machines for the grant money? 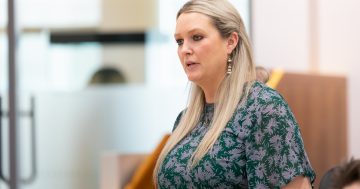