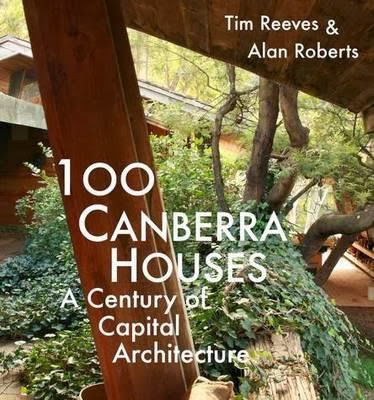 Tim Reeves and Alan Roberts wrote a book about houses in Canberra for the centenary, because centenary.

They’re going to be at Paperchain Bookstore on the 30th if you’d like to meet them, or ask why your house was/was not included in their book.

In celebration of Canberra’s Centenary, a new book, 100 Canberra Houses, tells the story of the capital through its houses, built on the Limestone Plains over the past 100 years. There is a story in every house, and the people who have lived in it.

Authors Tim Reeves and Alan Roberts have carefully sifted through more than 160,000 dwellings built since construction began in 1913. They have chosen 100 houses reflective of the city’s 100 years of style, each chosen for interest-value, variety, quality and significance. The book features houses within the boundaries of the ACT and those beyond the borders but still in its orbit.
Each period is reflected, from the original 1913 Robertson House to the iconic Benjamin (‘Round’) House; the first medium-density housing stock, the first ‘solar’ house and the latest EcoSolar house. It also features the first house rebuilt after the devastating 2003 bushfires. The purpose of the capital city is shown through buildings such as Government House, The Lodge, even the Aboriginal Tent Embassy.

Marc Edwards - 11 minutes ago
David Field Dickson’s not depressing, not everything needs to be sparkly and new. View
Tim Scully - 1 hour ago
Hmmm. “... two levels of basement car parking.” View
Sally Pinata - 1 hour ago
KinWah Kee is this what you’re talking about? View
Food & Wine 103

Russell Nankervis - 7 hours ago
I'm going to work. If the date changed I would be a little more keen to party View
Patrick Boucher - 21 hours ago
What happened to the concert being free? Used to be View
Business 17

@The_RiotACT @The_RiotACT
@UniCanberra has filled its courses for 2021 despite many international students being unable to return to campus this year https://t.co/jozj9N6tv5 (4 hours ago)