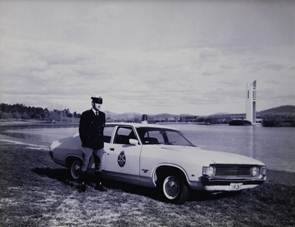 Many of the most memorable and dramatic police incidents in the history of the territory, from the tragedy of the 1997 hospital implosion and the 2003 bushfires to the 1993 siege at the Jolimont Centre, have been encapsulated in a new, hard-bound publication which celebrates 100 years of policing in the Territory.

One hundred milestones — significant events and achievements over the past 100 years that have changed policing, or have contributed to the evolution of the force and the rule of law in the ACT — have been selected for the book.

Along with this historical account of how policing, and the service itself, has changed and grown over the years, the book showcases the significant role police have played as the region transformed from a quiet, remote farming community to a bustling city and the nation’s capital.

The book can be purchased through the ACT Policing website at www.police.act.gov.au.The book costs $40, plus postage.

Are they going to do a second edition after the Eastman inquiry?

David Rudland - 5 hours ago
Lillie Rudland we must try this. View
Liz McCarthy - 6 hours ago
Been there a few times , close to home . Do it ❤️ View
Sue Webeck - 8 hours ago
Caroline Fulton unmmm yes! View
News 14

Despina Despina - 7 hours ago
We are so lucky in this country. Yet we have the COVID deniers, and anti vaxers who seem to refuse that COVID exists. Thank y... View
Lance Russell Baker - 8 hours ago
Timothy Bailey Too true. Their bizarre belief that they are the world's shining example of democracy is unbelievable. I could... View
David Kidd - 11 hours ago
Timothy Bailey No we do not View
Community 14

Howard Hughes - 11 hours ago
Tooheys for you bullet. View
Michelle Langsam - 11 hours ago
May I suggest a sage or cleansing of the vibe energy too. What ever you believe in can work, including sage the area especial... View
Reg Pascoe - 12 hours ago
Itll be sad not to be there for australia day celebration take care and hope it opens soon its an awesome place and your grea... View
Business 5

Matthew James - 12 hours ago
"where liability falls, should recipients of the vaccine suffer negative side effects" - you get taxpayer-funded medical care... View
Food & Wine 17

Acton - 12 hours ago
Seems some people would like to live in a police state. View
Food & Wine 21

Daniel O'Connell - 15 hours ago
It has happened here - at least a mini-version. Remember the storming of Parliament House in the 1990's by unionist members.... View
Community 12

@The_RiotACT @The_RiotACT
After a long absence, motorsport is returning to Canberra and Moruya in January with speedway action and even a demolition derby https://t.co/6l12LLaz3g (7 hours ago)

@The_RiotACT @The_RiotACT
An array of local and all-star Australian acts will feature at picnic-style entertainment hubs to help Canberra celebrate on Australia Day https://t.co/My7xFBeqRF (9 hours ago)

@The_RiotACT @The_RiotACT
A COVID-19 vaccine program in Australia could roll out as early as next month, but can employees legally refuse to receive it? https://t.co/MCQkZR0IDR (12 hours ago)