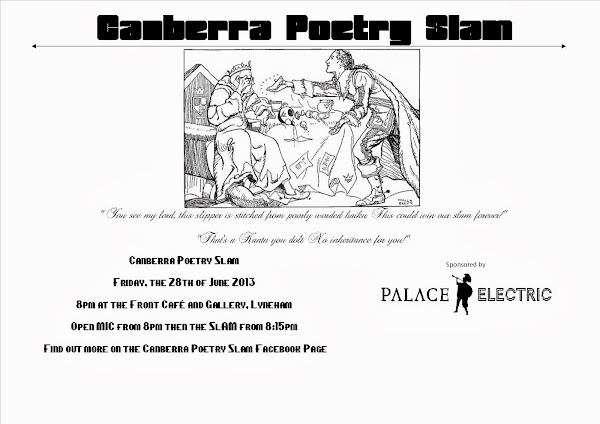 It’s that time of the month again where Canberra’s newest slam team invade the Front Cafe and get up to all sorts of poetic themed mischief.

Its the Winter for Haikus and Kantas. Maybe you were born with it. Maybe its Cold Outside! Regardless The June Canberra Poetry Slam is ON!
On Friday the 28th of June join Hosts Josh Inman and Varisht Gosain to listen and enjoy great performance Slam Poetry.

The night will commence with the Open Mike at 8pm. Open Mike is an opportunity for experienced poets and spoken word artists, and those trying for the very first time, to read out any piece they wish. It can be Prose, Poems, other peoples words or the rambling randlings you come up with in front of the Mike.

The Slam will commence around 8:15pm. The Slam rules:
– 3 minute limit
– 1 poem that you have composed
– no props or musical accompaniment

If you would like to compete, just find the two hosts during the course of the night and sign up.

The Canberra Poetry Slam prizes are sponsored by Palace Cinemas and the night will also feature guest acts.

Entry to the event is by donating money into a bucket!

Hey Everyone. The Facebook Event can be reached through the link above!

Thank you Varisht! I thought you were making a Finnish pun, after tracking that word through the wonders of Google. It fitted rather well with the cartoon, too.

A kanta is when you swap lines 1 and 4 of a tanka.

Explain kanta please. I know tanka, but not kanta.

I think you need to be called to heel, you bilingual punsters you.

Di Hunter - 28 minutes ago
Martin Budden fact though is that horses keep the fire fuel down, start obliterating them and start increasing massive fires,... View
Opinion 18

Jeffrey Brown - 1 hour ago
Ahhhh those were the days. Standing in the queue and watching the odd brawl of dudes trying to prove their worth. Was normal... View
Kim Rumble-Kozjak - 9 hours ago
Yes!!!!! Our kids have no idea! View
Property 13

Valerie Foster - 4 hours ago
This is a problem when a city expands the crime rate goes up. View
Erika Olivier - 6 hours ago
Reality is crime is everywhere, the fact they picked her is bad luck... View
Owen Lund - 8 hours ago
Dale Simpson mate dreambeyan is the land of the free View
Community 1

When it comes to summer dining, for me, nothing beats fresh sumptuous seafood paired with a glass of chilled crisp...
*Results are based on activity within last 7 days

@The_RiotACT @The_RiotACT
ACT Policing has located the body of a 21-year-old man adjacent to Paddy’s River Road. ACT Policing says the incident is the first road fatality of 2021 https://t.co/h37d0FswAa (36 minutes ago)

@The_RiotACT @The_RiotACT
A housing shortage in Yass means people seeking accommodation are finding themselves locked out of the town’s rental market https://t.co/CDuQ5Hbc4S (1 hour ago)

@The_RiotACT @The_RiotACT
Hannah Quinlivan is the creator behind the distinctive art along the light rail line. And there's a story behind each unique panel https://t.co/6fYF0Xtc3M (3 hours ago)