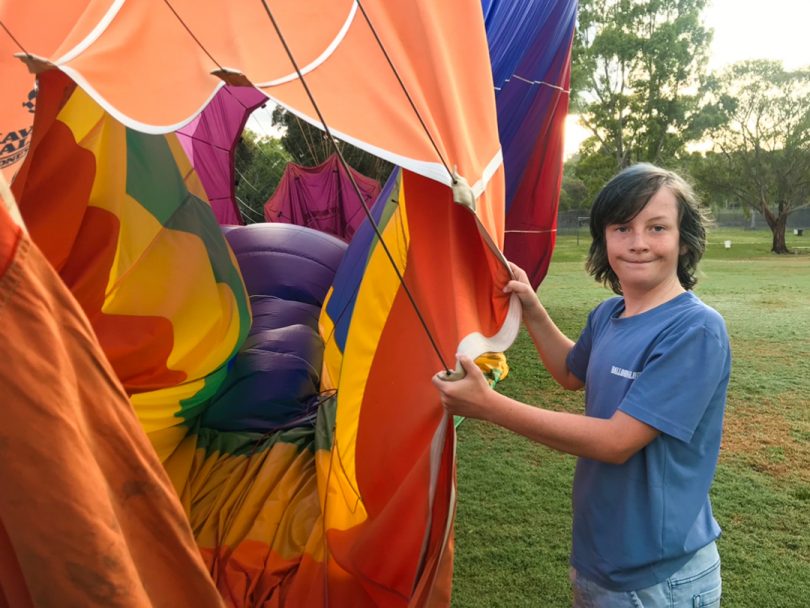 Hamish Davis, 11, has already flown in a hot air balloon 120 times and is set on making it a career. Photo: Supplied.

Hamish Davis is just 11-years-old but when it comes to career ambitions, his head is already in the clouds.

The Year 6 Neville Bonner Primary School pupil found his passion for ballooning at the ripe old age of two and, with the help of his dedicated mum, it’s grown to lofty heights.

With more than 120 flights under his belt, he has ambitions to become a pilot with Balloon Aloft Canberra as soon as he’s old enough to hold a licence – and seasoned professionals say that’s not just a pipe dream.

“My parents took me to the Canberra Balloon Festival when I was two and that’s when I fell in love with hot air balloons,” Hamish recalls.

“I just love everything about it.”

Hamish’s mum, Kylie O’Keeffe, says the attraction was instantaneous and – unlike other childhood obsessions – has never waned.

“He was just spellbound by them,” she said.

“He was a bit scared by the burners but he kept asking to go again. Then he started watching hot air balloons on Youtube channels.”

READ ALSO: You have to see to believe 12-year-old Ethan’s cake creations

A few years later, Hamish spotted a balloon coming in to land at a nearby oval and ran over to take a look.

“I helped them pack up and I’ve been helping out ever since,” he said.

Hamish took his first flight in 2017, aged seven, and was completely hooked.

“Every flight is different, sometimes we land in easy access areas, sometimes it takes 45 minutes to an hour to get there.

“One time we were flying the balloon and landed in a cul-de-sac in Gungahlin. Luckily it wasn’t very busy because it was early in the morning.”

Hamish also spent four weeks in the family kitchen sewing his own six-metre-high model balloon which he inflates and flies at his local oval and other places around the ACT.

Early starts are part and parcel of ballooning in Canberra and a mum who’s willing to get up before dawn is a must. 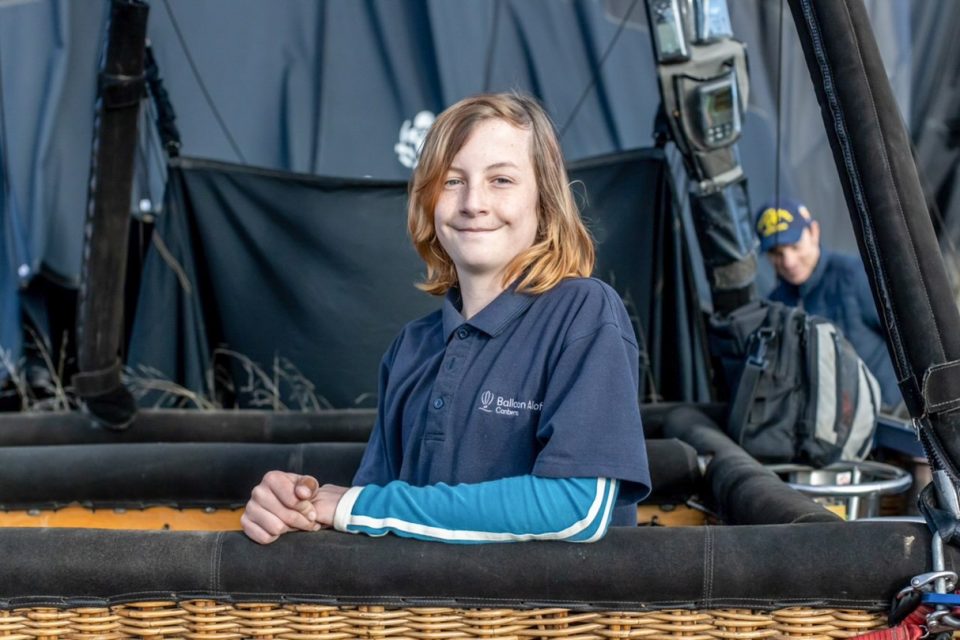 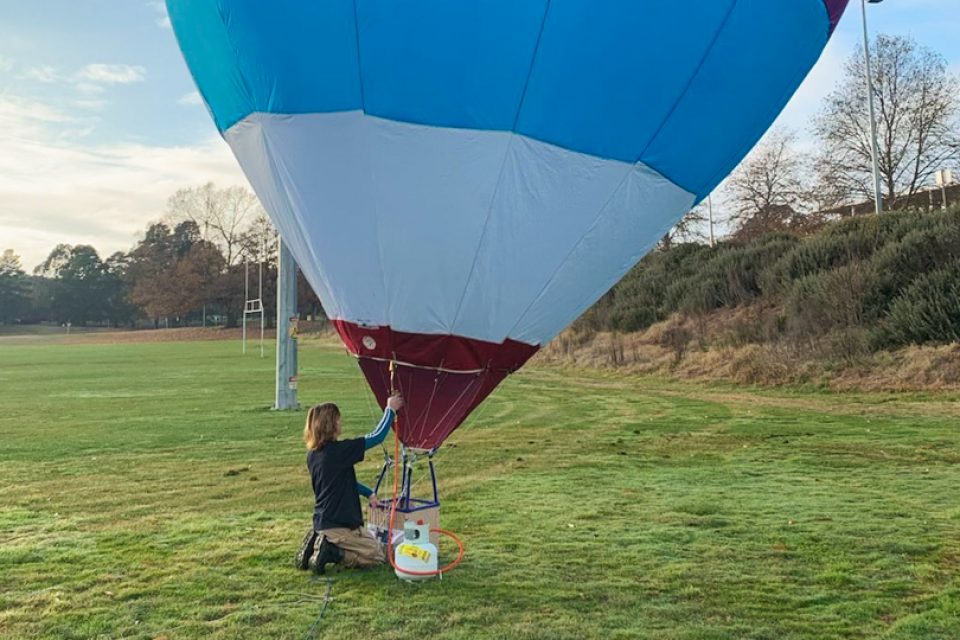 Hamish with the model balloon he built himself. 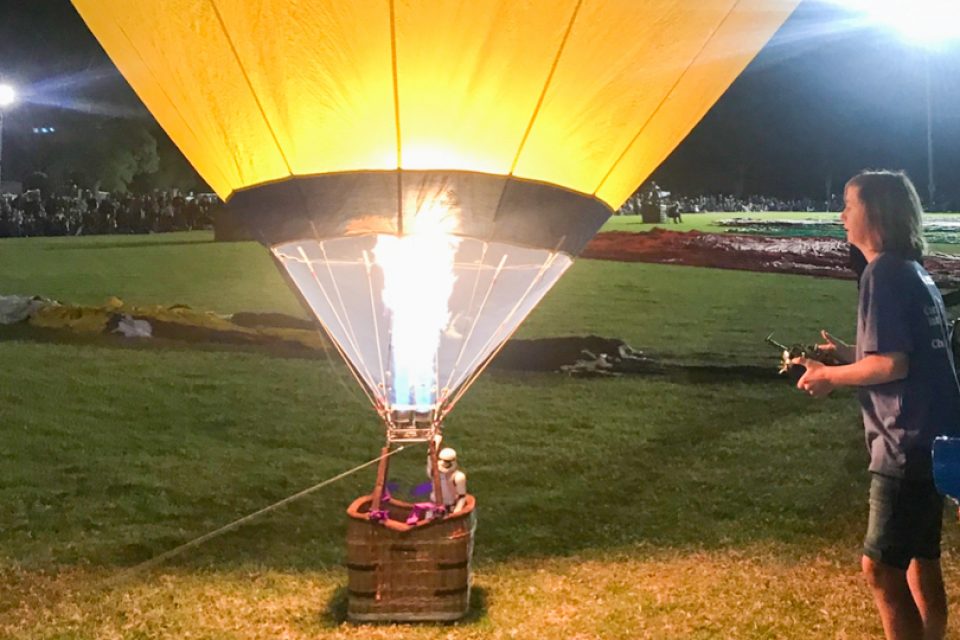 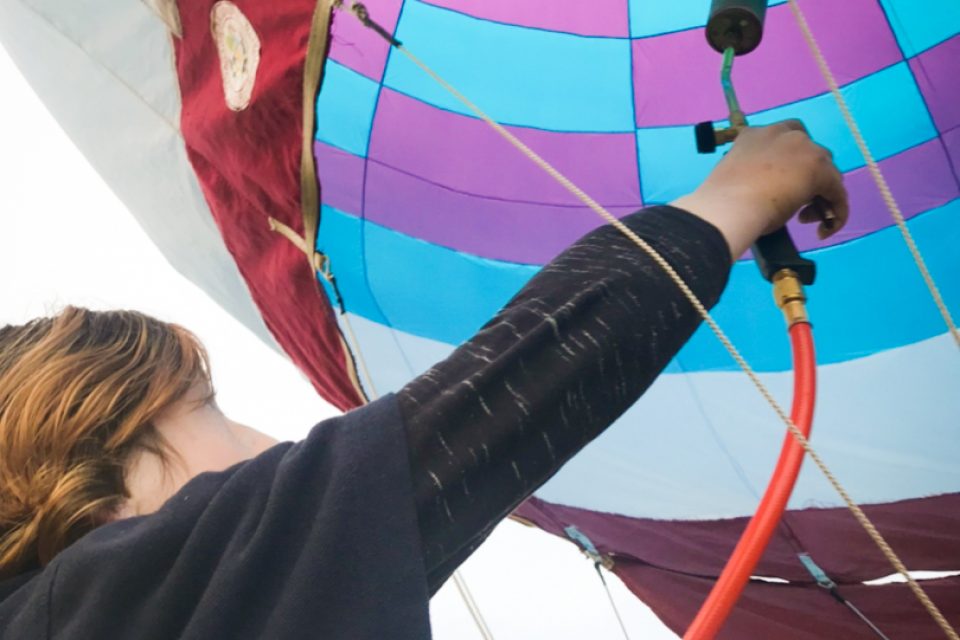 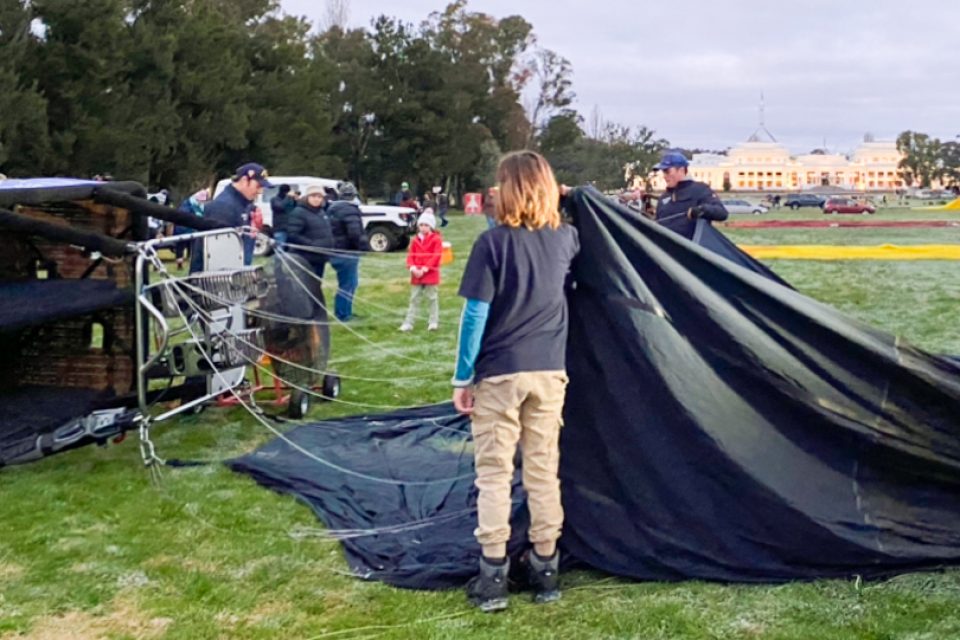 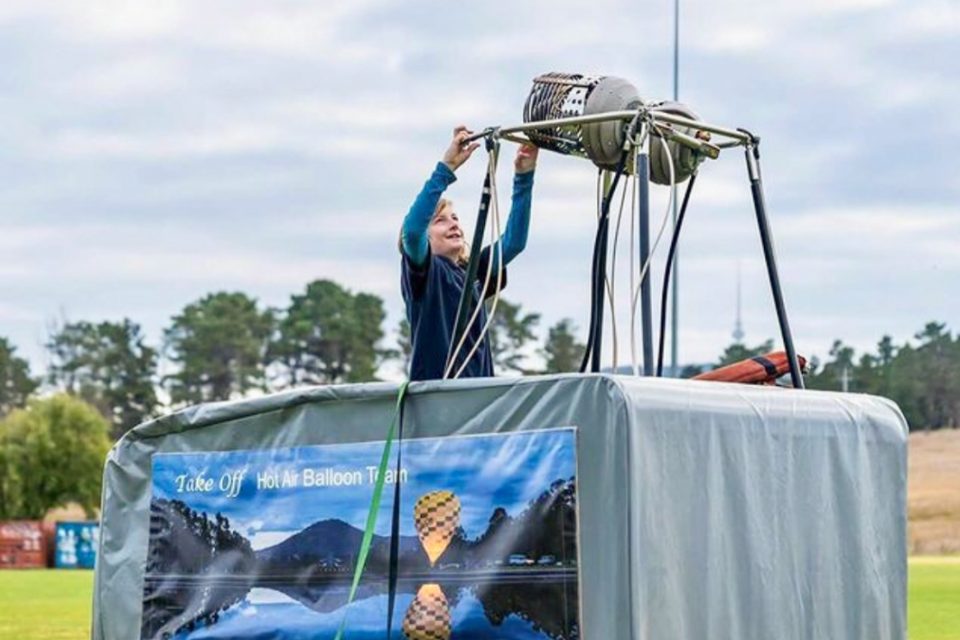 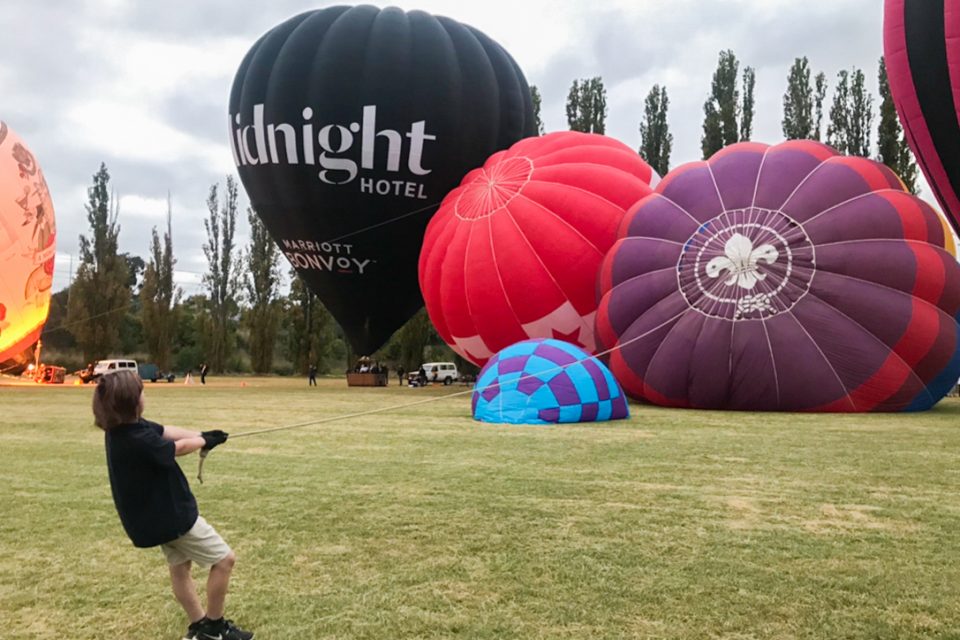 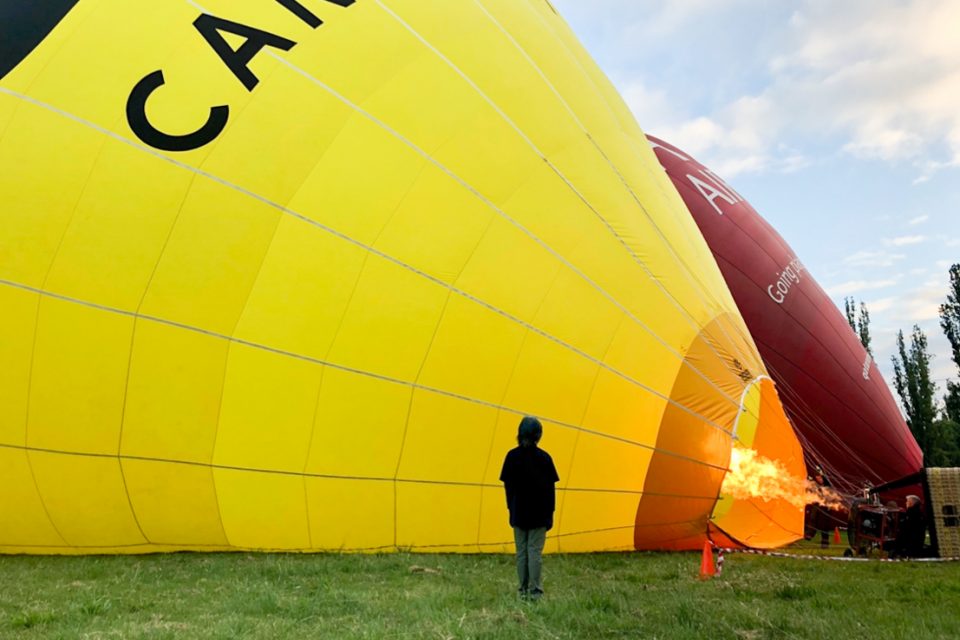 Hamish with the model balloon he built himself.

“You have to have relatively still winds and a low temperature,” Hamish says.

“In Canberra, we always fly in the morning. In Canowindra, sometimes you can fly in the afternoon.

“I went a couple of months ago and did some training there too.”

It’s not unusual for kids to bring their hobbies to school for show and tell but Hamish took that to a new level when he organised for two hot air balloons to visit.

“I’m just really interested in how they fly. It’s really peaceful up there. You don’t feel the wind because you are moving with it.

“Sometimes when I go out ballooning I stay on the ground and go with the retrieval crew.

“On pack-up, I help pull the balloon down and squish the air out — I’m doing pretty critical things.”

“His enthusiasm and his passion for ballooning has impressed us greatly,” he says.

“He’s brilliant, adventurous, and has shown us commendable skills, just like our professional crew.

“We feel privileged to nurture this young talent and no doubt he’ll be our future pilot once he gets his commercial pilot licence.”

Hamish can’t wait for that day to come.

“When I’m 16 I’m going to try and get my junior pilot licence so I can fly small balloons,” he says.

Kylie says she doesn’t mind the early starts and is happy to support Hamish’s passion.

“I do have to admit though, some mornings are really hard, particularly when it’s minus two degrees,” she said.

“But we are just happy to support him to go in whatever direction he wants. I get to fly sometimes … I get to see a lot of sunrises and I get to be a part of this community, so I do really love it too.”

Louise Earl - 2 hours ago
I love Canberra … but yes.. Canberra has missed the boat on a lot over a lot of years! Not just AFL. View
Matt Bacher - 7 hours ago
Michael Bourke …..as you and I can attest to mate 🤣 View
News 156