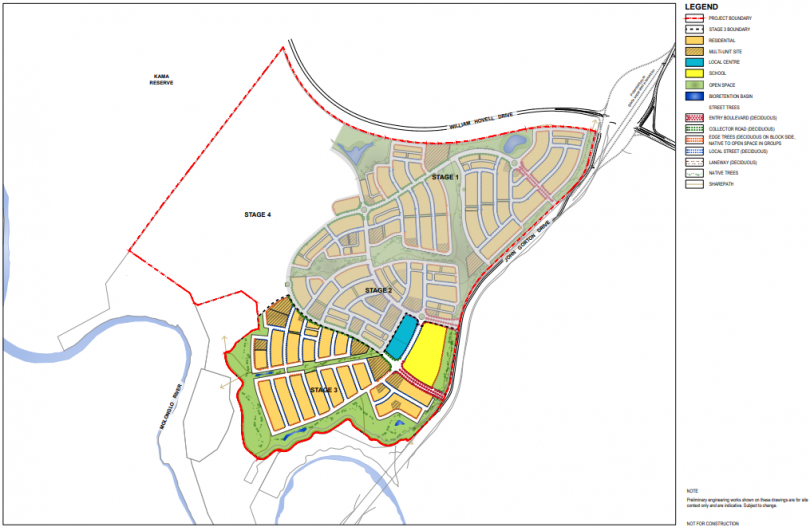 Nearly 2,000 dwellings will be added to the Molonglo Valley under the proposed Estate Development Plans for Whitlam Stage 3 and Denman Prospect Stage 2.

The Suburban Land Agency has submitted its development application for Whitlam Stage 3, while the Snow family’s Capital Estate Developments has lodged the first of two EDPs for Denman Prospect Stage 2.

The Whitlam estate is located about 10 km west of the CBD and 6 km south of the Belconnen Town Centre, with Stage 3 in the south, between Stage 2, John Gorton Drive and the Molonglo River.

A local centre is planned, including retail (such as a supermarket), a medical centre, a childcare centre and a tavern, while a 700-student primary school is planned next door. Entry to the stage will be via a tree-lined boulevarde from John Gorton Drive.

An active travel plan incorporates existing bike and walking paths, and equestrian routes, and details future ones, including a local on-road cycling route and recreational trail.

The EDP allows for a ribbon of open space along the western, southern and eastern edges, including rows of deciduous trees along the John Gorton Drive side of the school site, as well as a central green strip separating northern and southern residential areas. 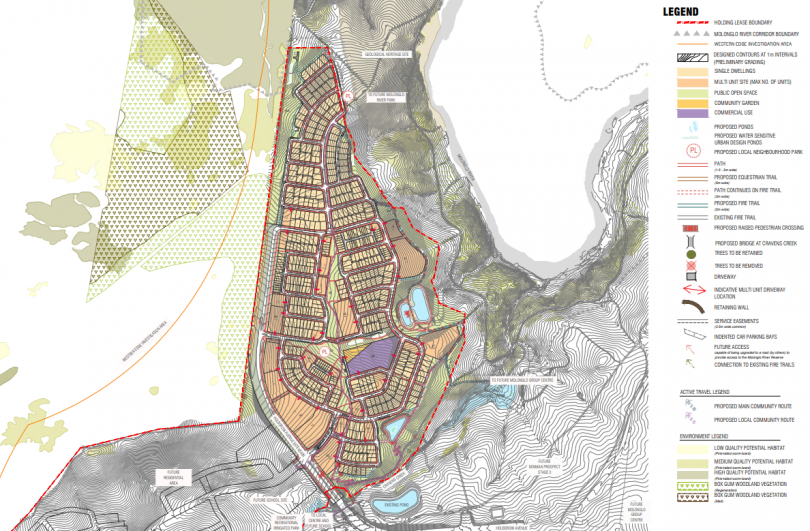 Further to the west in Denman Prospect, a further 1,214 dwellings are planned across 461 single blocks ranging in size from 250 square metres or less to 651 square metres or more, 26 multi-unit blocks comprising 753 dwellings.

The only commercial use proposed is for a retirement village on a 1.5-hectare site next to the central park.

The 78-hectare site (Block 13 Section 1) was a former pine plantation and forms the westernmost stage of Denman Prospect and will be the western edge of urban development in the Molonglo Valley.

The proposed estate adjoins bushland to the west, Stromlo Forest Park to the south and the Molonglo River Park and Denman Prospect Stage 1 along its north and eastern boundary.

Bounded by Uriarra Road, Cravens Creek and Holborow Avenue, the site slopes to the north-east providing an outlook over Central Canberra, the National Arboretum and Black Mountain.

For active travel, a network of cycling and walking paths links key facilities such as the Knoll Park in the north, through the centre of the site to the existing local shops, south of Holborow Avenue.

They connect with the eastern edge pathway, adjacent to the Molonglo River Park Boundary, forming a complete network for the estate.

They also connect to two local neighbourhood parks, located at the far north and central-south.

A mix of evergreen and deciduous trees are planned, and species have been selected to maximise canopy to mitigate heat island issues and shade paths.

Jen Wright problem is they go broke because not enough people to buy, have to have the people first

David Morrison there are so many people in the Molonglo now.

And still no shops

In the mean time, I’m loving the Coombs shops! 😉😂

Great news for home buyers. Thanks.