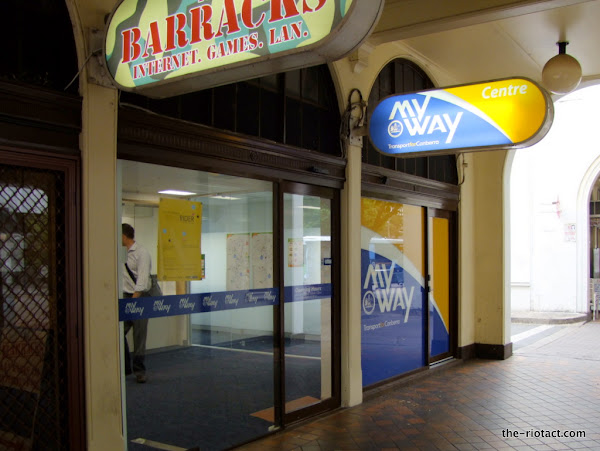 Territory And Municipal Services bring word that of the 47,000 seniors invited to start using MyWay cards on Action buses some 2,700 have taken up the offer:

The Council on the Ageing (COTA) is writing to the ACT’s 47,000 seniors inviting them to apply for a combined ACT Seniors/My Way card which will include $10 worth of pre-loaded bus travel.

“We have been really pleased with the response from ACT seniors to this new technology. Anecdotal reports from COTA and our Shopfront and Library staff are that seniors are looking forward to the combined cards,” Mr Peters said.

“They are also pleased to have $10 worth of pre-loaded travel on the cards – an offer which is available until the end of this year’s Seniors Week on 25 March.”

“The off-peak daily concession fare of $1.70 has now been removed and replaced with an off-peak concession fare, which will include a free 90-minute transfer, at a set fare of $0.55. This means that seniors who take, for example, a journey to the shops in the morning using two connecting buses, then a journey home using two connecting buses will pay no more than $1.10.”

For regular bus travellers, a daily fare cap will ensure seniors pay no more than $3.80 daily. A monthly cap of 36 paid trips will also mean that any trips taken over the capped amount during the calendar month will be free.

You gotta read the previous post carefully. I was going to whip out the pedant’s hat, and ask what sort of cue it was. A pool cue or a theatrical cue. I know which would be easier to “cue up”

Then when you think about it…waiting to be served…..or called….. could be a cue.

mmm. The Riot Act: a new way of crafting the language.

This historic pre Myway photo of the Civic Action office should be preserved. Nowdays people are always cued up and spilling out onto the pathway waiting to resolve Myway issues.

Possibly the reason so few seniors have taken up the offer is that there are not enough cards been put about for them. Many of the outlets are waiting for their tickets or been underprovided. Any figures on the number of seniors making forlorn trips to pick up their tickets?

What the media release should have said:

… the majority of seniors would enjoy cheaper travel, but the minority who take more than 3 off-peak trips will not enjoy having to pay more than they currently do.

Edgar Sharp - 2 minutes ago
Not "therefore" ok. If you aren't willing to understand the varying levels of offence then I think you are doomed to a life o... View
Neenie Baines - 7 minutes ago
David Ward she doesn’t it daily. I live in the same suburb as her. She flies though those 40 zones like she thinks the law... View
Zoë Clews Tibbitts - 9 minutes ago
Edgar Sharp that's a low bar - not corrupt, just repeatedly breaking the law, so therefore ok? View
News 18

Julia Ross - 40 minutes ago
Corey Karl hmmmm, money has changed hands methinks. View
John Elliott - 17 hours ago
I live within 100 metres of the Establishment and I don't see a problem. So many people are whinging and complaining. The bui... View
News 6

Mark Dando - 1 hour ago
I don't get the level of coverage here of the views of these self-appointed 'guardians'. If the comments on this and the prev... View
Liam Matthew - 2 hours ago
There is not significant community disquiet about the proposed development. Calling yourself the Guardians of something doesn... View
HSewell - 4 hours ago
Genuine question: why should we pay attention to a self-appointed self-named group like the "Lake Burley Griffin Guardians"?... View
News 1

Acton - 5 hours ago
Will resisting arrest constitute assault against a police officer? What if you resist arrest while at a peaceful demonstratio... View
Gregg Heldon - 7 hours ago
It's the ultimate disrespect, isn't it? And should be treated as such. The real question is, will the court protect those who... View
News 1

Warwick Alsop - 5 hours ago
I don't disagree necessarily, although we do still have a guaranteed full week of work that isn't just cancelled on a whim by... View
Archie Mac - 9 hours ago
The amount of young people in Canberra who are given an unpaid ‘trial’ needs to be investigated too View
Opinion 2

Acton - 8 hours ago
The Greens fail to practice what they preach. The voices of the community are routinely ignored by the Greens/Barr ACT Govern... View
News 22

A David and Goliath struggle between a YMCA childcare centre and developers has been resurrected by a new development application...
Business 7

A groundbreaking decision by the Full Bench of the Federal Court is likely to have significant implications for any employers...
Community 2

With Canberra’s frosty winter mornings just around the corner, there’s nothing nicer than a hot shower to warm you up. So nice...
News 18

@The_RiotACT @The_RiotACT
With lockdowns easing, life is slowly returning to normal. To help discover what's on, the ACT Government has launched RISE Canberra - your new home for experiencing local events https://t.co/0OBQBv40Ui (3 hours ago)