Lynne from The Glaciers has kindly sent through an account of their winning night at The Basement for the Canberra Battle Of The Bands:

In early November 2008, The Glaciers stepped straight off a plane and straight onto the Pot Belly stage for Heat 2 of The Battle of the Bands and we played our way straight through to the Grand Final at the Basement. 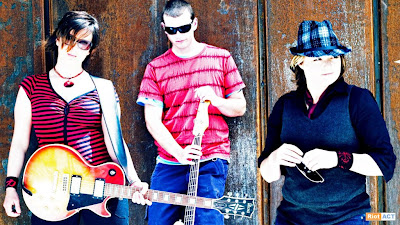 And what a great Grand Final The Basement put on! This awesome venue has the biggest Green Room in Canberra which made the evening feel more like a festival than a competition! No wonder The Basement is a staple for live music in this fair city.

Everyone enjoyed the night’s music and had a great time… no tantrums, no devious plots to unhinge fellow competitors…no stage mums…

…Anyhoo…, the place started to fill up quite quickly and before we knew it the night’s organiser, Sean Smeaton, had drawn the line up out of a hat and announced that The Glaciers would be the fourth band to play on the night. The gauntlet was thrown down and the challenge set: how were we going to keep our nerves in check, and more importantly stay sober, four bands into the evening!?!

Adelyn (Wailer/Guitarist) tried to keep busy by opting to pay homage to the OCD gods, tuning and retuning her axes all the while justifying her whisky intake by claiming it was for “medicinal purposes!?!”

Ben (master of the bass groove) took a seat next to the stage, bowed his head and drilled his lines until his fingers bled (a mild exaggeration) all the while imbibing a small African nations’ water supply (possibly also an exaggeration).
Laura (chief noise maker on drums), set up her kit…and waited… (it’s what drummers do).
The only thing to keep us from imploding was the awesome music on stage, courtesy of LSD (Laughing Sam’s Dice – a big sound cover band who rocked the stage and got the party atmosphere going), The Moots (an exciting rock band who are great to watch) and Lazy Jane (a talented multi instrumentalist duo who breathe life into any and all manner of string and unusual instrument/s and give John Butler a run for his money).
As the final Lazy Jane song finished… Adelyn’s OCD exited the building amid cries of “Where’s the tuner?” and “I’ve lost my plectrum!”… Cool as a Glacier???….hmmm I think not….Global Warming has much to answer for!
Ben handed Adelyn half a dozen picks and flashed his trademark infectious and unstoppable grin whilst Laura… well… waited… (have we mentioned it’s what drummers do?).

We climbed on stage and as we launched into our first song Transition Overload the crowd seemed to draw closer to the stage and people started to hit the dance floor.

The sound was incredible due to the magic of The Basement and sound guy extraordinaire Kurt, who managed to perfectly capture Laura’s drums as she pounded at them like she was dishing out lashings in the town square! It was incredible – her beats permeated every pore.

It also perfectly highlighted Ben’s electrifying bass lines as he powered his way through every song! Adelyn’s Mesa 5:50 was working overtime and still the crowd fell silent as her soft and husky vocals soared to explosive and passionate heights.

We immersed ourselves in our self-penned songs bringing the enthusiastic crowd with us as they danced to the infectious cheeriness of Great Day and the Middle Eastern sounds of Conscience (co-written by Jess of The Crooked Fiddle Band fame). It was amazing to play to a crowd who so willingly offered their undivided attention as we delivered the unadulterated, raunchy and uncensored Red Raw and the explosive and haunting The Garden with powerhouse vocals and intricate melodies and rhythm.
With the crowd still on its feet, we ended our set with a meshed cover we call Eurythmix (a smash-up of Eurythmics’ Sweet Dreams and Missionary Man, The White Stripes’ Seven Nation Army and Marilyn Manson’s version of Sweet Dreams). The cheeky crowd pounded the floor with enthusiasm and we had an absolute blast!

As we stepped off stage, it was time for the mindblowing talents of Scaramush. The energy, intensity and musicianship of the lads in this band is something to behold.

The night was ended with the cool and inspiring sounds of Gordon Navara with Axys of Symmetry – a performance that served to further imbed Gordon as one of Canberra’s best musicians.

When Sean announced that Gordon Navara with Axys of Symmetry had come in third, Scaramush second and The Glaciers first…well, …we were left speechless (minus a few girlie squeals – even from Ben ;P – that accompanied the group hug!?!)

The bands in this competition were jam-packed with talent and great music, so be sure to catch any of them whenever they play next!

In fact, it just makes you realise how lucky we are to live in this town of ours ….and how much we must support local live music! There’s so much good music and so many incredible musos in this city! Consider this a call out to all music lovers: We simply must throw ourselves head first into the thick of it all, grab this local live music scene with both hands and give it a great big ravenous snog!

Sean Smeaton is in the RiotACT 2009 calendar…

“The only thing to keep us from imploding was the awesome music on stage, courtesy of LSD”

Tagline! You know it makes sense.

Great wrapup Lynne, but I must raise a slight protest – no devious plots to unhinge fellow competitors – several drum stools were “misplaced” through the evening. Dun-dun-DUNNN! 😛 Our drummer found his just before the last set, craftily hidden with someone else’s gear. The show went on, of course, with a borrow’d throne.

Still, I had a blast up on stage, and really enjoyed your set. Congrats on a well deserved win, I’m looking forward to gigging with you guys soon!

Kudos to Kurt, who did an awesome job on the desk, and congrats to all the other bands. It was a great night indeed. 🙂

Lucy Irene - 1 hour ago
Mmm, not sure why ‘rainbow’ roundabouts could be an issue, curious! View
News 36

Stephen Dixon-Jain - 4 hours ago
Thanks for the suggestion, Julie. I've just adourned our letter box with the colours of the Aboriginal flag. Stephen View
Julie Macklin - 5 hours ago
People crowded together. Unbelievably irresponsible. There are other ways to make the point, and a more permanent point to re... View
Izaäk Bink - 6 hours ago
Robert Harrop hilarious coming from someone who had this as a legitimate profile picture View
Community 14

Capital Retro - 6 hours ago
One of my favourite reads is "Pigeon House and Beyond" by The Budawang Commitee. View
News 4

Capital Retro - 6 hours ago
When you say "we", who exactly do you mean? How about you lead by example and tell us what you would do because many before y... View
chewy14 - 6 hours ago
Robert, Yes we do. The first part of that would, however be to admit that Indigenous people commit crimes at rates many times... View
Robert - 7 hours ago
Those numbers reflect the numbers of indigenous people in our jails. Surely we need to do something about aboriginal people b... View
show more show less
*Results are based on activity within last 7 days

@The_RiotACT @The_RiotACT
The town of Jugiong’s landmark poplars are nearing the end of their lives and are set to be replaced by lipstick maple trees https://t.co/mpdMkiNXWz (3 hours ago)