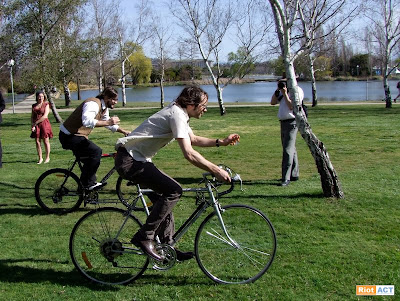 It was a nice mixture of old and new faces, from the previous Tweed Ride, that braved the mean streets of Canberra bringing sartorial elegance and civility to the benighted denizens of our city.

When I left the ride around four a lovely time had been had by all. We started behind the War Memorial, scooted through Civic, over Commonwealth Avenue, along the southern shore of the lake stopping for a photo break near Commonwealth Place, then over Kings Avenue to finish up near the castle in Commonwealth Park where passing Floriadists could gawp.

After a picnic the Chap’nwealth Games took place which were mostly denoted by the ability to cycle a course with a glass of spirits before downing the remains on completion. As drinking games go it was hard work and the top riders were becoming worse for wear by the finale.

This activity was followed by competitive “hearty greetings”, and then a good old fashioned game of cricket which, thanks to strict tippety rules and one-hand/one-bounce catching was over astonishingly quickly.

Without legal action and calls for business boycotts, its hardly a Tweed Ride at all!

Five stars. A splendid were had by all.

Why are those people riding on the grass, aren’t there enough cycle paths for them?

Think of the environment!

HiddenDragon - 46 minutes ago
In light of this - https://the-riotact.com/act-government-systems-not-rated-to-receive-security-classified-information/430823... View
Acton - 5 hours ago
You hope. I admire your trust in the efficiency and perpetual good will of an indulgent government. However, you have forgott... View
Acton - 5 hours ago
“Those who would give up essential liberty to purchase a little temporary safety, deserve neither liberty nor safety.” Be... View
Opinion 6

Gabriel Spacca - 2 hours ago
Well I feel sorry for those who are coming here to escape the anthills of Sydney and Melbourne. The current government is try... View
Marc Edwards - 4 hours ago
Ian Bushbell is about 50+ years to late View
Stephen Page-Murray - 5 hours ago
Can they please ‘undiscover’ it? View
Food & Wine 14

bj_ACT - 3 hours ago
Chewy I’m surprised by your views based on some of your previous comments over the years. I’m not sure that property Deve... View
Sandra Noonan - 4 hours ago
No no no !!!!! View
chewy14 - 11 hours ago
JS9, I disagree because preferences and wants are not met with housing almost always. I'd prefer to live in a mansion but I c... View
What's On 5

Roslyn Russell - 5 hours ago
My little granddaughters will adore it! View
News 4

chewy14 - 7 hours ago
Yeah these claims about human rights are ridiculous. Whilst I support voluntary euthanasia, our elected government does not.... View
Acton - 9 hours ago
I agree with our need for easy access to voluntary euthanasia as decided by the individual and not vetoed by anti-choice reli... View
Property 2

realist - 8 hours ago
Isn't it funny that Ben Ponton has taken so long to speak up. Can the government impliment changes before the Developers comp... View
Motoring 1

Kerry Crampton - 8 hours ago
We live just inside the Queanbeyan border (behind the Airport motel) and we hear the noise from the speedway but it doesn’t... View
News 27

Andrea Kerr - 14 hours ago
Kim KD Winks the developer has paid $400,000 in settlement to the government after many months of negotiations that’s a lit... View
Motoring 4

mf64 - 14 hours ago
Plus Canberra has the worst most self entitled drivers around. Having driven all over the country and around the world by far... View
Property 8

Shayne Borger - 16 hours ago
Just what we dont need. Another bland box of units. How unimaginative View
show more show less
*Results are based on activity within last 7 days

A documentary made by a Batemans Bay filmmaker about keeping Australia's oldest show on the road is one of five...
Property 21

@The_RiotACT @The_RiotACT
Musicians have survived the COVID-19 shutdown with backyard gigs and venues at reduced capacity, but with JobKeeper ending on 28 March and noise restrictions in Civic, many are wondering what's next for live music in the capital https://t.co/vwb3OyHZ5w (31 minutes ago)

@The_RiotACT @The_RiotACT
Meet Linus, a cat who has had a tough start to life and is at @rspcaact waiting for a special owner who has plenty of time & patience to help him settle into his forever home https://t.co/o8YjOFw68q (2 hours ago)

@The_RiotACT @The_RiotACT
Here’s your chance to snap up a delightful, established home in a sought-after area with views galore and close to schools, shops & childcare https://t.co/ers2rZj1x7 (3 hours ago)