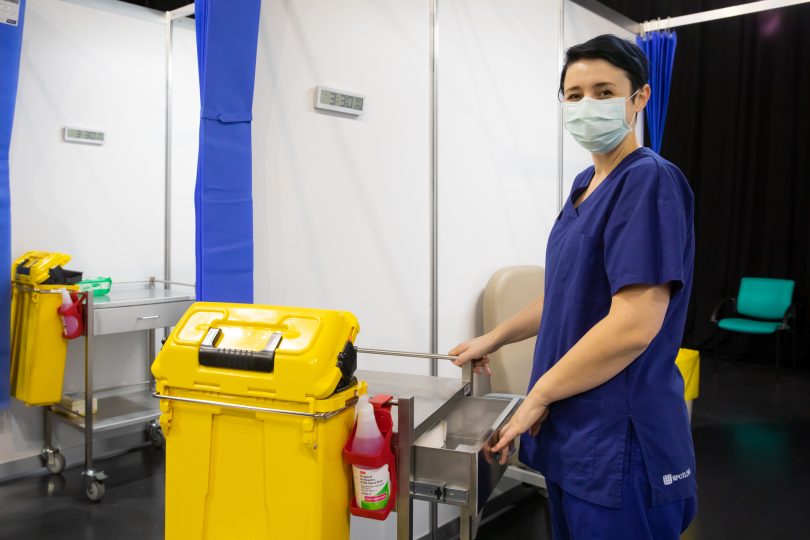 The ACT Government says the implementation of nurse-to-patient ratios has just begun after nurses over the border went on strike this week over pay and conditions. Photo: Michelle Kroll.

After nurses over the border went on strike this week over pay and working conditions, the ACT Government has confirmed that the local implementation of nurse-to-patient ratios has begun.

Minister for Health Rachel Stephen-Smith said on Wednesday (16 February) the ACT had commenced phase one of the implementation of minimum nurse and midwife-to-patient ratios earlier this year with a view to this being completed by the end of the financial year.

Ratios will be implemented across medical, surgery and mental health wards. Generally, one nurse will be assigned to every four patients.

Ms Stephen-Smith said an additional 50 nurses had already been put on at Canberra Hospital and Calvary Hospital earlier this year to help meet ratios.

By the end of this financial year, another 40 nurses will be put on so the first stage of ratios can be implemented. 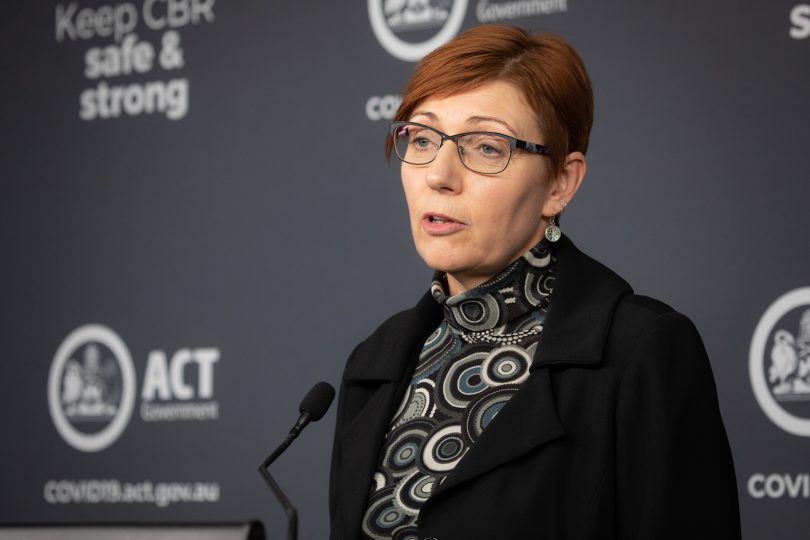 Minister for Health Rachel Stephen-Smith said the first phase of the policy will be implemented by the end of this financial year. Photo: Michelle Kroll.

The ACT Government says it’s working hand-in-hand with the Australian Midwifery and Nursing Federation (AMNF) about how the next stage of the plan will be implemented.

These will likely be more complex, Ms Stephen-Smith said, as it will relate to more complex wards like emergency departments.

The ACT branch of the union has been contacted for comment.

However, according to a pamphlet issued by the organisation in 2018, 95 per cent of all nurses and midwives supported the implementation of mandatory minimum nurse-to-patient ratios.

The NSW branch says an appropriate nurse-to-patient ratio is one nurse to three patients in emergency departments and one nurse to four patients on a ward.

They say this is both clinically proven and financially viable.

Thousands of nurses in NSW went on their first strike in a decade earlier this week, despite a ruling from the Industrial Commission on Monday that the strike should not go ahead.

Around 30 rallies took place across the state in Sydney, Yass, Bega and many other towns, with nurses alleging their current working conditions were unsustainable and the pandemic had pushed a stretched system to breaking point.

According to Yass nurse Paul Haines, 99 per cent of nurses around the state confirmed they supported the strike action.

“We as nurses have got a professional responsibility to advocate for safe patient care,” he said.

Mr Haines said a lack of a suitable pay rise for nurses felt like “a kick in the teeth” after two years of working in PPE and exposing themselves and their families to the virus.

Ms Stephen-Smith said the government and health authorities have acknowledged the pressure being faced by the health system and the workforce, although she noted the ACT’s hospitals had “perhaps not been as intense as in NSW”.

She also noted the ACT had not chosen to freeze the wages of nurses and other healthcare workers as “some other jurisdictions did”.

NSW implemented a controversial freeze on public sector wages in 2020, which was lifted in June 2021.

“We have continued to support our frontline workers, nurses included,” Ms Stephen-Smith said.

It had been a 2020 Labor election promise to implement nurse-to-patient ratios in the ACT if they were re-elected.

They also pledged to hire at least 400 extra healthcare workers, of which 200 would be nurses.

Ms Stephen-Smith said she was proud to implement this election promise.

Bring back in hospital training as well

is it also applicable in private hospitals?

I’ve just discharged from hospital where I witnessed regular breaches of nurse/patient ratios, nurses doing double shifts (yes, an 18hr day), running on the margin. The ACT Health answer….staff appreciation day….collect your egg and bacon roll on your way into work….it’s just not good enough. My deepest admiration goes to each and every nurse and doctor who do their jobs because they actually give a damn. Time to step up to the plate ACT Health and actually deliver real and sustained changes to the system!

Julie Mylchreest this has been happening for a decade or more, ex gf who worked for act health did double shifts regularly, they were super lucrative because they paid for the next day too.

Terrible value for taxpayers compared to adequate staffing in the first place.

Ash Miller as a WHS practitioner, it left me feeling very concerned for the safety and well-being of staff and patients. I saw nurses and doctors continuing to work with injuries.

Julie Mylchreest medicine has always had this kind of recklessness, especially with respect to junior doctors by seniors “I had to work like a dog and work 20 hours straight, so should you”.

Agree it’s stupid but doctors are given this status and bully pulpit and are somewhat beyond criticism and this enables hospital admin to normalise this stuff, so what do you do?

It wouldn’t be tolerated in many other industries (eg construction) as it endangers more people than just those who are working exhausted and sleep deprived.

So, can we expect the minimum nurse to patient ratio to be implemented (not just announced) prior to 2030?
And when will fair pay and other needs be implemented?