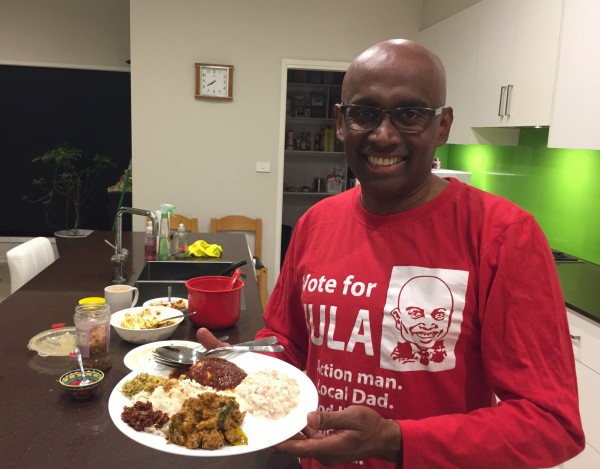 When he contacted the RiotACT to sign up for our candidate challenge, Labor candidate for Murrumbidgee Mark Kulasingham asked whether he could whip up a curry feast rather than bake a cake.

The Kula Campaign Curry Comfort Pack is created from all local ingredients in line with Mr Kulasingham’s focus on local issues.

While the curry is obviously a nod to his cultural heritage, Malaysian-raised Mr Kulasingham is not a recent migrant. He first came to Australia as an international student at Adelaide University after completing South Australia’s Year 12 program remotely.

“I was unable to get into the university of my choice in Malaysia because of my race,” he says.

Mr Kulasingham’s family had moved to Malaysia from Sri Lanka in the early 1900s. Both his parents were born in Malaysia.

“I was told you can’t get into the degree that you want at the university that you want, because you’re black.”

His family decided they would beat the ethnic quota system in operation in their home country by sending Mr Kulasingham to study in Australia.

“I fell in love with the place,” he says.

Mr Kulasingham returned to Malaysia upon the expiration of his student visa and worked there for three years before returning to Australia, initially to Adelaide before moving permanently to Canberra.

The marketing and communications consultant has lived in the Woden area for the 26 years since, firstly in Farrer, then Swinger Hill before settling 17 years ago in an ex-government house in Curtin that he and his wife have since renovated.

Mr Kulasingham’s children were born at the local hospital and attend local schools (their father believes education is the greatest gift any government can give its people, and describes Canberra’s public school system as “superb”).

“So we’ve just been a Woden family, really, so we love this place,” he says.

When Mr Kulasingham first arrived in Canberra, he took at job at a local business founded and run by his cousin since 1984, Kingsley’s Chicken, in that other section of the Murrumbidgee electorate, Weston Creek.

“I was initially just a chip chucker,” Mr Kulasingham says.

“Then I got the marketing comms job at Kingsleys, where I stayed for ten years.”

“It was very simple marketing, we just went to the bus interchanges with bags of chips and gravy and asked people to have a try,” he says.

He says he’s been an ad man all of his life.

“I did a degree in history at university, but then got into advertising as soon as I finished, and I still work in marketing and comms now, but I did the whole thing, you know, creative director in ad agencies [at Black and Brown in Malaysia and Alpine Promotions in Canberra],” he says.

“Then I got into the public service, because the Federal Government started to change the way they looked at marketing, they started to get in private sector people.”

Having joined the Labor Party in 2004 due to concerns about racism within Howard government rhetoric, the previously apolitical Mr Kulasingham has since worked for two politicians in the ACT Legislative Assembly, John Hargreaves and Joy Burch. He also ran for the Assembly at the last election, in 2012. While both Mr Hargreaves and Ms Burch are from the right faction, Mr Kulasingham is unaligned.

These days he is a consultant working on a contract basis, mainly back in the Federal sphere.

In between marketing gigs, Mr Kulasingham has worked in the community too.

“I was always interested in community stuff,” he says. “I did a lot of volunteer work.”

The Curtin resident taught drumming to troubled high school kids who played in a pipe band with him, then later he headed up an advocacy body, the Federation of Ethnic Communities Council.

He says his real passion is local issues.

“Every time I go door knocking, you find every house has a different issue,” he says.

For example, he recently took video of a pedestrian nearly being taken out by a car because of faded line markings at Coleman Court, and sent it to the ACT Government’s Fix my street website. That issue was solved within three days. 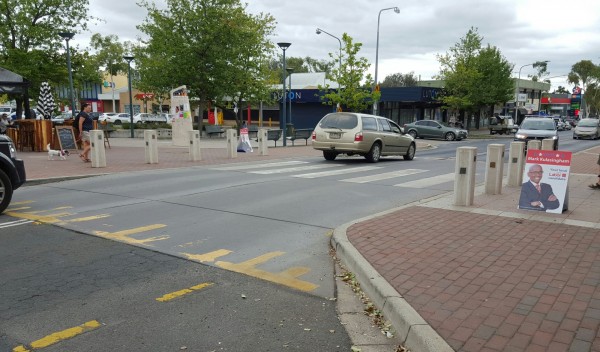 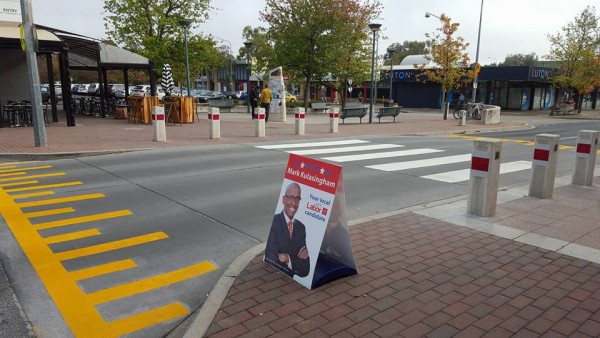 “Local representatives must be the eyes and ears for the government, that’s what you’re there for, that’s what people put you there for.”

It may not always be a vote winner. In another case, Mr Kulasingham pulled out his iPad to help a resident with no internet access to order new bins. After they arrived, the potential constituent rang Mr Kulasingham to let him know.

“Thank very much, I’m going to vote for you, now, you’re Liberal aren’t you?” the man said.

Needless to say, the candidate corrected this misapprehension.

As for the curries, well, I made the mistake of eating dinner before visiting the Kulasinghams. The fact that I still ate a whole plateful and took at bag of leftovers home gives you an indication of how good they were.

Mr Kulasingham said the recipes had been handing down within his family, from his parents and grandparents.

YOGHURT SALAD WITH EGGPLANT AND CUMIN

Fry the onion in a little oil on a low flame until soft.

Add the cumin and fry until fragrant. (Do not let the cumin burn)

Add the eggplant and fry with the onion and cumin. (If the mix starts to stick add 1 tbsp of water)

Fry the mixture until the eggplant is soft and cooked through.

In a large bowl, combine the eggplant mix, cucumber and tomato with the yoghurt.

Cover and refrigerate until ready to serve.

Cut the chicken into 1cm cubes

Rub the salt and turmeric over the chicken and set aside.

In a food processor, blend the garlic, onion and ginger with 2 tbsp water to make smooth paste.

Add the oil to a large saucepan or wok, and fry the cloves, curry leaves, cardamom and cinnamon on a low heat until the mustard seeds start to pop.

Stir in the garlic mixture and curry powder and cook, stirring, until fragrant. (If you want a hotter curry, add chilli powder to taste).

Turn the heat to medium and add the chicken. Toss the chicken through the spices and brown.

Turn the heat to low and add the coconut cream and lemongrass. Add salt and pepper to taste and simmer uncovered until cooked.

A black guy in a red T-shirt which says:

And he appears to be all of those things. What a contrast to some of the humourless careerists we currently have.

Josh Salmon - 5 hours ago
Not as long as our fellow "Ken Behrens" keep voting in the short bald guy 😂 View
Josh Salmon - 5 hours ago
Ashley Wright Maybe in a normal world, yet the ACT light rail is less frequent and slower than the current bus network (eg. W... View
jms253 - 6 hours ago
Wait, people are only now starting to realise the tram is slower than the bus routes and a waste of money and it would have b... View
News 21