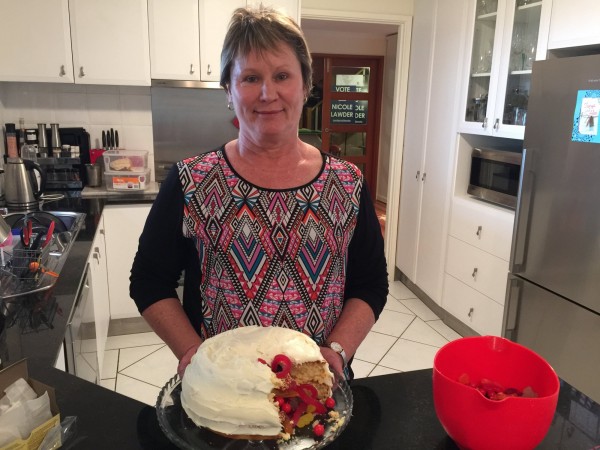 Nicole Lawder is a progressive Liberal MLA and candidate for the Tuggeranong seat of Brindabella, and she can bake.

When RiotACT visited Ms Lawder at home in Fadden this week, the first thing we noticed was the garden full of spring blossoms and bulbs. The second was the views over the Tuggeranong Valley towards the Brindabellas.

Ms Lawder has lived in Tuggeranong since 1988, when she moved to Canberra. Together with her husband Peter, she has five adult children and 12 grandchildren, all of whom live in the Brindabella electorate, and all of whom regularly congregate on the back deck to enjoy that garden (which Ms Lawder says is mostly the work of her husband, though she’s the keen vegetable gardener) and view. 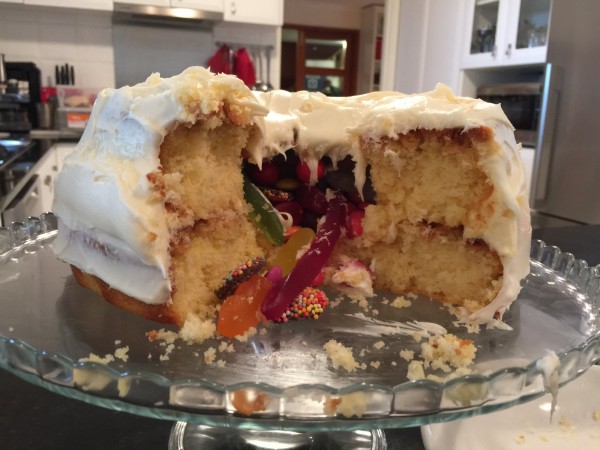 The third thing we noticed was the fluffy, tall looking butter cake being smothered in Vienna cream that would form Ms Lawder’s entry in the candidate challenge.

Before becoming an MLA, Ms Lawder worked as CEO of national peak bodies in the areas of homelessness and disability. I asked whether this was unusual for a Liberal candidate. Wasn’t it perhaps more aligned to Labor ideals?

“A lot of people have said that to me, but I don’t think that’s true at all,” Ms Lawder says.

“There’s quite a number of people in our party who’ve come from the community sector, but to me, whilst I’d always say I have really strong social justice values, I also very much believe in financial and economic responsibility, so that you do have the resources to help those people who otherwise might get left behind.”

She concedes she is to the left of her colleagues.

“I sometimes say to people I’m about as far to the left of the Liberal Party as you can get,” Ms Lawder says.

Given Liberals leader Jeremy Hanson’s focus this campaign on community, indigenous and health issues, I put it to Ms Lawder that perhaps the party is more progressive generally in the ACT than in other states.

“I’m not too sure about other parts of the country, because I’ve lived in Canberra for a long time, and I focus on the local issues.”

Ms Lawder has taken an active role on local concerns such as water quality and clean waterways, a disturbing smell that impacts on many Tuggeranong residents (perhaps from the tip?) and revitalising the Town Centre.

While RiotACT was at Ms Lawder’s place, the phone ran hot, and each time it was a Brindabella voter ringing to ask questions about the flyer Ms Lawder had delivered to their letterbox today. She responded to their queries patiently and succinctly.

The MLA talks of resentment in the Tuggeranong community about light rail and about a feeling the area is neglected generally.

“[Residents] see things falling apart and falling into disrepair. Around town can be looking a bit grubby, but the people aren’t grubby, and they resent that,” she says.

It’s a precinct that has long outgrown its former “nappy valley” label, but remains something of a dormitory suburb, Ms Lawder says.

“There isn’t a lot to draw people from other parts of Canberra to Tuggeranong, or for the people who live here to stay here for their recreational activities, so I’d really like to see a focus on drawing more people to the area, and that has economic benefits as well.”

She mentions election commitments to upgrade Greenway and Calwell playing fields and the potential to attract Kanga Cup games in this context.

Now, back to that cake, and what it is about it that is representative of Ms Lawder’s vision for Canberra. It’s a vanilla cake, so designed to be quite plain, she says, as Canberra can appear to an outsider. But hidden in the centre is a stash of treats: freckles, jelly snakes, jelly babies and red and green frogs among others.

“While Canberra to some people mightn’t seem very exciting, when you get to know it better, on the inside, everything’s happening,” Ms Lawder says.

“There’s the natural environment, there’s a lot of diversity, it’s fun, we’ve got shopping, so there’s lots of surprises on the inside of the cake.”

Ms Lawder points out that many Australians think of the Canberra they recall from rigid, organised school excursions to the capital as a child, but once you spend some time here as a resident, you discover its secrets.

The concept’s implementation worked for me. There was something magical about breaking through the butter cake to find the treats in the middle. It was a delicious experience.

125g butter
½ teaspoon of vanilla
½ cup castor sugar
2 eggs (she uses her own eggs from her chickens, who are called Parsley, Sage, Rosemary and Thyme. Then she also has Salt and Pepper, and Juniper)
1 ½ cups self raising flour
1/3 cup milk

Have butter at room temperature, beat butter with vanilla until light and creamy, add sugar and beat until light and fluffy.
Add eggs one at a time, beating well after each addition.
Stir in half the sifted flour with half the milk, stir until combined.
Add remaining milk and flour, stir in lightly, then beat lightly until mixture is smooth.
Spread into greased tin, bake as approx 40 mins until lightly golden on top.

Have butter and milk at room temperature, place butter in small bowl of electric mixer, beat until butter is as white as possible.
Gradually add about half the sifted icing sugar, beating constantly, add milk slowly then gradually beat in remaining icing sugar.
Mixture should be smooth and easy to spread with a spatula.