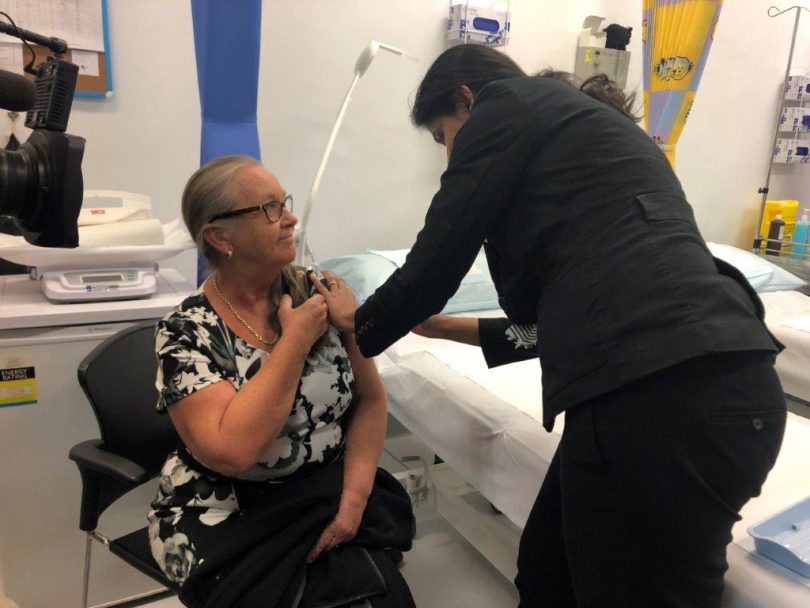 The ACT has recorded double the number of flu cases so far this year compared to the same period last year with health experts warning that Australia is in for a ‘killer’ flu season.

According to ACT Health, 237 cases of influenza have been recorded in the ACT this year compared to only 118 cases in the same period between January and April last year.

And while the early surge in flu cases in the ACT isn’t as bad as in some other Australian jurisdictions, experts are warning that the effects can be deadly and that now is a good time to get the flu vaccine.

“This year, we expect the flu to kill at least 4,000 people which is the same number as deaths from suicide and the road toll combined,” he said.

Professor Booy said if people get vaccinated it can help stop transmission of the flu and prevent the number of cases from rising even more.

The ACT Government said the annual flu vaccination is the most effective way to protect against the flu and is urging Canberrans to get vaccinated ahead of the flu season (June to September).

“Flu can have a devastating impact on the most vulnerable people in our community and it can lead to serious complications and even death,” said Joy Burch MLA who on Wednesday (May 1) received the flu vaccination at the Conder Medical and Dental Centre to help raise awareness of its importance.

“We know that life can get busy and finding time to book an appointment is challenging. But think about the time out and the interruption to your everyday life if you do get the flu when you’re not vaccinated.”

ACT Health Directorate’s Public Health Specialist Dr Vanessa Johnston said that current influenza activity in the ACT is stable but that each year the flu season varies in severity and the circulating strains.

Immunisation Coalition CEO, Kim Sampson, said there has been a very different start to the flu season this year, with unusually high rates of confirmed cases during the summer months.

“While it is not entirely clear why this might be the case, we do know that influenza occurs all year round in the tropics, including northern parts of Australia. Another factor is the ease of international travel, particularly between Australia and Asia,” Mr Sampson said.

“A third factor may be the particular strain of the virus presently circulating in the community, prior to the vaccine becoming available.”

In the ACT, the flu vaccine is free for people at higher risk of complications from flu, including children between the ages of six months and five years.

Dr Naveena Sunkaraneni from the Conder Medical and Dental Practice reminded Canberrans that the virus in the flu vaccine won’t give them the flu because it does not contain any live virus.

“Everyone is at potential risk and having the flu vaccine every year is the best way to protect yourself and others. I encourage everyone over the age of six months to roll their sleeves up and get vaccinated,” Dr Sunkaraneni said.

In the ACT, the flu vaccine is free for people at higher risk of complications from flu, including:

This year ACT Health is expanding the influenza immunisation program for older Canberrans so that other primary care providers can also give them the vaccination, not only GPs.

Some pharmacies in the ACT will be participating in a pilot project to deliver the free flu vaccine to people 65 years and older. This same age group can also access a free vaccine if they are already attending a Walk-in Centre for medical care.

“We are urging all Canberrans to call their GP, an ACT Government Early Childhood Immunisation Clinic or visit a local pharmacy to make an appointment today,” Dr Johnston said.

Are kids good to have this seasons shot?

Jason Malcolm Charlis got it at the moment 😞

Oh nooo!! Are you feeling better?

I hope the older people are cared for better this season

I wonder what the majority of those that have been identified with the flu are people who have had the flu shot previously.

Tania Doble, have you had your flu shot?!

Melissa Dean - 12 minutes ago
Such a wonderful, hard working, caring man and friend, taken to soon. I will miss our chats. I learnt so much from him, and e... View
Kelly Salapak - 11 hours ago
Drew Forrest devastated View
Georgia Usher - 12 hours ago
Drew Forrest oh no that’s so sad. I’m so sorry. View
Opinion 88

Vanessa Jones - 36 minutes ago
Katy G tried to build housing on Higgins oval. Now Kippax Oval will be sold for units/shops. Greens-Labor govts are very inte... View
Vickie O'Malley - 40 minutes ago
Andrew Jones just had a look, and they're ugly. View
Trish Lingard-Wyss - 41 minutes ago
Just because I can afford a bigger block why should I have to give up my yard. Also while house blocks are getting smaller th... View
News 4

pink little birdie - 1 hour ago
Most of the start up support tends to be geared to that in the technology space or things with end consumer appeal. Most inno... View
Kevin Hodder - 12 hours ago
Rent, rates, stamp duty, taxes, work cover compliance ect and every thing else the act gov stings you! just so you can open t... View
Property 7

Joel Suryawanshi - 1 hour ago
Sarah Young we are also forgetting that the greedy real estate agents are bumping up the prices and attracting investors from... View
Matthew Beale - 12 hours ago
Sarah Young sadly it comes down to being able to buy in only very outer suburbs, if you have a deposit. It is a seller's mark... View
Sarah Young - 13 hours ago
Robert Chisholm it’s crazy, I think they should do a 1 house rule at the moment, I read something last week about buying an... View
Food & Wine 15

ACT resident - 3 hours ago
Is this more spin from the lessee? ALDI at Fyshwick did not proceed because there are very stringent rules in the ACT regardi... View
Public Sector 3

chewy14 - 4 hours ago
Capital Retro, You've missed the point. The idea of collocating the charging points at the PV/Battery sites is for efficiency... View
Capital Retro - 5 hours ago
What about the 100% renewables/emissions free government buys up all the abandoned service stations in the territory and conv... View
What's On 1

Robbie Munday - 14 hours ago
Inadvertently result in budget cuts more like. View
Christopher Cuba Rabanal - 14 hours ago
Further explanation needed. Because I believe in decriminalisation for users and addicts. But hard prison sentences for deale... View
show more show less
*Results are based on activity within last 7 days

@The_RiotACT @The_RiotACT
Frugii Dessert Laboratory will close on 30 June, almost four months after the death of 'Mr Frugii'. Canberrans have been quick to share their fond memories of the iconic Braddon store https://t.co/EkZvUAF7dv (16 minutes ago)

@The_RiotACT @The_RiotACT
The community has backed the government's Integrated Plan for the Red Hill Nature Reserve and surrounds. Both the environment and Federal Golf Club are winners https://t.co/O2Dee0YFDV (2 hours ago)

@The_RiotACT @The_RiotACT
Zoya Patel asks whether it's time we sacrificed big blocks in favour of a fairer use of land across the city https://t.co/RNR2DbGIl3 (4 hours ago)