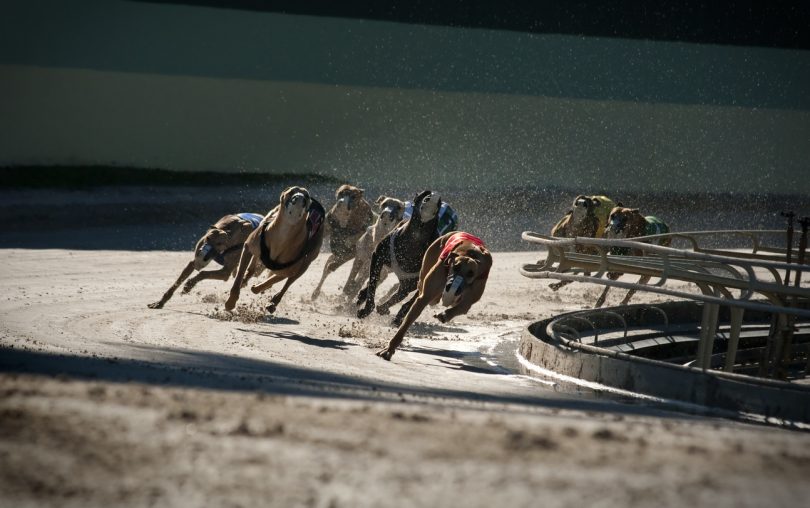 Not without a fight: the ACT greyhound industry says they won’t acquiesce to the legislation banning greyhound racing.

The ACT greyhound industry is promising a bitter legal battle to overturn the Government’s legislation passed this week to ban racing in the Territory from 30 April 2018.

Canberra Greyhound Racing Club spokesman Kel Watt said the ACT industry had national support and long pockets to mount a multi-pronged legal challenge to the legislation and take the matter to the High Court if necessary.

Mr Watt said the first court appearance would be in the Federal Court in Sydney on 8 December followed by the ACT Supreme Court on 8 February. The club would be challenging the validity of the legislation, arguing malfeasance and taking up the lack of any compensation.

Mr Watt said that while Queanbeyan and Goulburn offered a safety net to owners and trainers, the legislation was an act of political expedience that could impact other animal-based activities such as horse and harness racing, resulting in the loss of 50 jobs and putting people out of business without any compensation.

“Part of the reason we are fighting this is because of the unjust way the industry and local staff have been treated but the precedent has now been set that a fringe element and extreme view can now be imposed on Government. It’s not just a fight for the Canberra Greyhound Racing Club,” he said.

The club, which he said had never had an animal welfare and integrity issue, planned to operate in Canberra for as long as possible but there were contingency plans to move to Queanbeyan and Goulburn, ”which really shows how pointless and ridiculous this is”.

He said the ban was not supported by the Australian Veterinary Association, had happened without any consultation and was the result of a political deal between the minority Government and the Greens.

“Documented failures in NSW have horrified our community and the independent Durkin report found that the NSW and ACT greyhound industries could not be divorced,” he said.
“This ban has been carefully considered to maximise both animal welfare outcomes and the support delivered to the small group of people involved in greyhound racing here in the ACT.”

Under the two Bills, the Domestic Animals (Racing Greyhounds) Amendment Bill 2017 and the Racing (Greyhounds) Amendment Bill 2017, those who breed, own or train racing greyhounds in the ACT face regular registration renewals, new licencing requirements on owners and breeders, and a mandatory Code of Practice for people who have day-to-day control of greyhounds registered for racing.

“These amendments give us a better line of sight on the entire lifetime of greyhounds here in the ACT. For example, registering new litters within seven days will mean every young greyhound is accounted for, whether or not it is later registered as a racing dog,” Minister for Transport Canberra and City Services Meegan Fitzharris said.

“The Code of Practice is the standard against which licence and registration applications and renewals will be assessed. It is being developed in consultation with the Animal Welfare Advisory Committee, the RSPCA, greyhound welfare organisations and industry participants, including interstate racing authorities.”

She said an ongoing review of greyhound breeding and training practice would help the Government assess whether any further intervention was warranted.

Mr Ramsay said Woden Community Service had been engaged to provide support to people leaving the industry, who would be able to apply for transition support packages until 30 June 2018.

“The period for the development of those packages has been extended until 30 September 2018. I encourage everyone who may be eligible to apply for a transition support package, which will be tailored to suit each individual’s needs,” Mr Ramsay said.

Free counselling was also available to anyone impacted by the end of greyhound racing in the ACT. The Greyhound Transition Program at Woden Community Service can be reached on (02) 6221 9539.

For updates and to register for transition support, go here or contact Woden Community Service here.