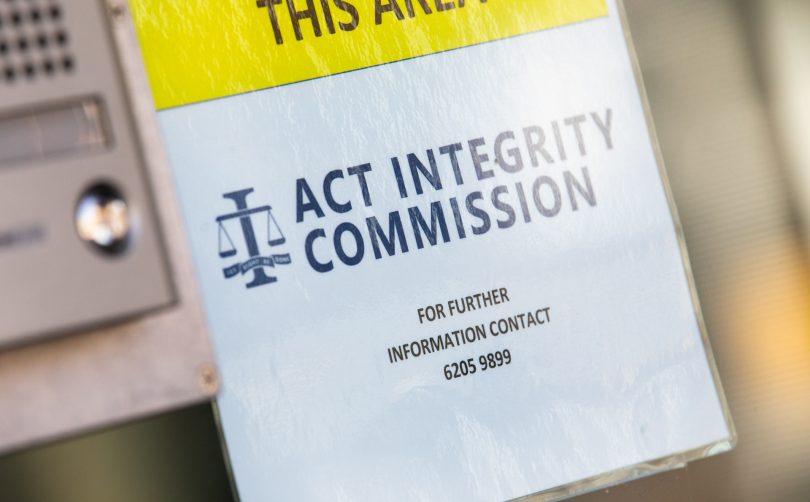 The ACT Integrity Commission has received around 170 tip-offs since 1 December 2019. Photo: Michelle Kroll.

All eyes have been on NSW’s Independent Commission Against Corruption (ICAC) since the shocking revelation of a secret relationship between Premier Gladys Berejiklian and Daryl Maguire, the man she was forced to sack two years ago over corruption allegations.

The most damaging and more salacious content coming out of the Maguire ICAC hearings was obtained through secret phone recordings between the former member for Wagga Wagga and the Premier. But the ACT Integrity Commission (ACTIC) currently does not have the power to conduct covert phone intercepts.

The two Territories are currently the only jurisdictions without the capacity to legally intercept phone conversations.

ACTIC CEO John Hoitink and the Integrity Commissioner, former Federal Court Justice Dennis Cowdroy, are working on a submission to have the body officially recognised under the federal Telecommunications (Interception and Access) Act.

“It has impeded our investigations so far. We have to find other legal ways of doing things,” Mr Hoitink said.

There remains around three full investigations and 13 preliminary investigations into “serious and systemic” corruption within the ACT public service (ACTPS).

Despite the saturation of anti-corruption coverage in the media, the ACTIC has not seen a large spike in tip-offs since Ms Berejiklian’s appearance or the ACT election, Mr Hoitink told Region Media.

“There has not been a tidal wave of complaints, it has remained constant,” he said. “There have been 127 matters referred since 1 December last year.”

Around 13 per cent of these referrals result in an inquiry, about five or six times the rate of other jurisdictions which sit at around 2 to 3 per cent, he said.

Mr Hoitink refused to confirm or deny if there had been an increase in complaints or referrals relating to conduct during the ACT election.

The ACTIC received an extra $6.7 million in funding over the next four years in the latest ACT budget update. The funding increase had allowed the body to employ more specialist staff.

It now has around 14 full-time staff.

Acknowledging budget constraints on all governments during COVID-19, Mr Hoitink said he would like to see this number increase to around 25 full-time staff.