The use of QR codes will be scaled back across NSW from tomorrow as other COVID restrictions are eased. Photo: Michelle Kroll.

UPDATED 2:30 pm: The use of masks and QR codes will be scaled back in NSW as almost all remaining COVID-19 restrictions are to set be slashed in the next week.

From tomorrow (18 February), dancing and singing will be permitted in hospitality venues such as pubs and clubs, and the two square metre density limit will be scrapped.

QR codes will only be mandatory in settings such as nightclubs and music festivals.

However, changes to mask rules won’t come into effect until next Friday (25 February). Masks will only be mandatory on public transport and settings like hospitals and aged care facilities.

But NSW Premier Dominic Perrottet said they will still be encouraged in places where people are unable to maintain social distancing, such as retail settings.

Singing and dancing will be permitted at music festivals from next Friday and the required hotel quarantine period will be reduced for unvaccinated travellers from 14 days to seven days.

Mr Perrottet said he would work with the state’s public service to bring people back to the office in the coming weeks and he expected other employers to do the same.

The official direction for employees to work from home will be changed to “at employer’s discretion” from tomorrow.

“This is the new reality. We don’t want restrictions in place for any longer than necessary,” Mr Perrottet said.

In the ACT, low-level public health measures, which include a two square metre density limit, an indoor mask mandate and a ban on dancing and singing in hospitality venues, are scheduled to come to an end next Friday (25 February).

However, a decision about whether these public health measures will be extended will be made next week. The ACT’s public health emergency remains in place until mid-May.

The Victorian Government has also announced changes to its public health settings today.

From 6 pm tomorrow, QR codes will no longer be necessary in many places, but are still required in hospitality and entertainment venues, density limits will be scrapped for hospitality venues and indoor dancefloors will be permitted to reopen.

Opposition Leader Elizabeth Lee has called on the ACT Government to follow suit.

“It appears these governments understand how tough businesses are doing it at the moment and how important easing these restrictions are when safe to do so.

“Surely the health advice across the states and territories should not differ so much that businesses in the ACT are forced to comply with density limits in stark contrast to those just across the border,” Ms Lee explained. 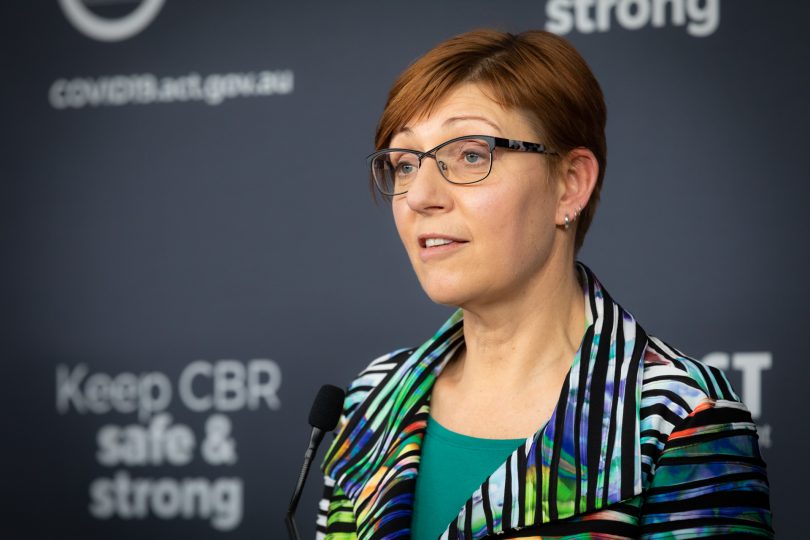 12 pm: A man in his 20s has become the 32nd person in the ACT to die with COVID. No further information has been released and ACT Health has extended its condolences to his family.

The ACT has recorded 537 cases of COVID-19 overnight.

The COVID-19 crisis in aged care homes across the country has become so severe, with the sector recording hundreds of deaths, that the Federal Government has been forced to deploy the military and set up a national task force to address it.

Federal Aged Care Minister Richard Colbeck has defended his refusal to label the situation a crisis amid calls he should resign.

According to the Federal Department of Health’s latest weekly report published on 11 February, there are 987 COVID-19 outbreaks in residential aged care facilities across the country. There have been 1619 deaths in aged care, including 652 in 2022.

As at 10 February, there were at least 18 active aged care outbreaks in the ACT.

There are active outbreaks in at least 18 residential aged care facilities in the ACT, according to the Federal Government. Image: Department of Health.

Most aged care homes in the ACT have been exposed to COVID-19 throughout the Omicron wave, with several experiencing severe outbreaks. Reports have also circulated about aged care residents being locked down in their rooms, unable to leave, for a number of weeks.

But Ms Stephen-Smith said yesterday this was not in line with the current health advice.

New data released by the Australian Bureau of Statistics shows there have been almost three times as many COVID-19 deaths in Australia among people born overseas compared with people born in Australia.

People born in North Africa and the Middle East were around 10 times more likely to die from the virus than those born in Australia, even after age was accounted for, while people who came from South-East Asia and Southern and Central Asia recorded twice as many COVID-19 deaths as people born in Australia.

There have been 43,246 cases of COVID-19 since the start of the pandemic reported in the ACT.

Hospital restrictions were eased yesterday to allow two visitors per patient per day, although only one is permitted at a time. Case by case exemptions still apply.

Current visitor restrictions in place at ACT aged care facilities mean a maximum of five visitors are permitted at any one time or in any one day, other than for end-of-life visits.

Individual facilities can determine their own additional visitor policies regarding vaccination and any other entry requirements.

The vaccination rate for the ACT’s 12-plus population remains 98.6 per cent, and 62.9 per cent of residents aged 16 and older have received a booster.

There are now 1447 people in hospital with the virus and 92 people in ICUs around the state.

Victoria has reported nine deaths overnight and an additional 8501 cases of COVID-19 from 5661 RATs and 2840 PCR tests.

There are now 401 people hospitalised with the virus in the state.

“Surely the health advice across the states and territories should not differ so much that businesses in the ACT are forced to comply with density limits in stark contrast to those just across the border,” Ms Lee explained.

Ms Lee, I don’t recall Mr Perrettot saying anything about the changes in NSW being based on health advice.
He’s made a political decision to reduce the restrictions early.

Ironic that this week NSW nurses have staged strike action over workload and the Premier reduces Covid restrictions, in particular masks which reduces infections by 53% according to NSW Health’ web site.

The report reads “” the 32nd person in the ACT to die with COVID.”.
It says “with’, not “from”.
So with other information being held back could this mean there may have been other factors , as well as Covid, in the tragic passing of a very young man .. ?

“With” or “From”?
I get your point and acknowledge your regret for the passing of this young man, but even had he been suffering other conditions, but having Covid would have impacted upon any other conditions that he might have otherwise had.

I dislike the way the media/health officials associate Covid & other conditions. Is it supposed to lessening the significance of the loss?
We don’t know if the young man had other health issues. What we do know is that someone has lost a son, a brother and maybe a husband and father. That is the real story.