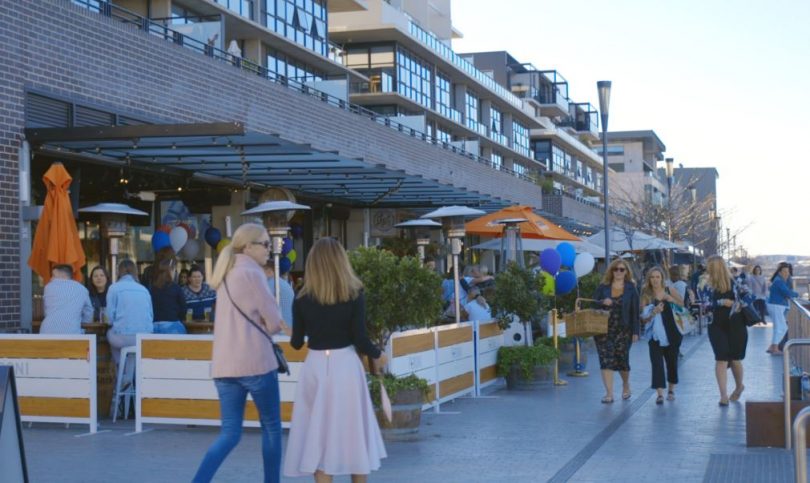 The high-growth areas reflect the shift to higher density living and the apartment boom, exemplified by Kingston. Photo: George Tsotsos.

More than half the increase in the ACT’s population last financial year was the result of overseas migration, according to new figures from the Australian Bureau of Statistics.

The growth rate was unchanged from the previous year.

The new northern suburbs of Moncrieff, up 1800 people, and Lawson (1000) had the largest increase in population, while the fastest growing areas at 19 per cent were Greenway in Tuggeranong, where there has been a surge in unit and townhouse development, and the new suburb of Coombs in the Molonglo Valley.

Greenway and Coombs ranked nine and 10 respectively in the fastest growing areas in the nation.

The other big movers reflect Canberra’s move to higher density living and the apartment boom.

Phillip, where the Woden Town Centre is being transformed by medium and high-rise apartments, grew 9.4 per cent, while another suburb dominated by multi-storey units, Wright in Molonglo, was up 8.7 per cent.

The inner south downsizers’ enclave of Kingston, grew 7.4 per cent, driven by the Foreshore development.

In Gungahlin, Franklin and Harrison grew 3.9 per cent.

In future years, big population increases can be expected in the Town Centres of Gungahlin, Belconnen and Woden, and in Braddon and the City as high-rise residential precincts are completed, not to mention the developments along the Northbourne Avenue corridor, where adjacent suburbs experienced growth of 2-3 per cent.

Many areas of Tuggeranong and Weston Creek lost population, as did some of the older areas of Belconnen.

The ABS said Melbourne again was the capital city with the largest population increase (119,400 people), and also the highest growth rate of any capital at 2.5 per cent.

“The number of people living in our capital cities increased by 307,800 people (1.9 per cent) in 2017-18”, said ABS Demography Director Beidar Cho. “This in on par with the average growth over the previous three years”.

The Big Canberra component of the Big Australia demographic experiment raises a number of sustainability issues, including water – particularly with the push now very obviously on to supply Yass with water from the Canberra system.

That’s about 300 thousand too many

The Canberra number never gives the full story. I think when it comes to preparing for the future you need to count regional Canberra. Queanbeyan alone has 40,000 people.

Queanbeyan isn’t in the ACT so why should it be counted?

Andrea Kerr if you see how I worded it, I said “when it comes to preparing for the future”. When it comes to jobs, hospitals, schools, infrastructure, event planning, etc you have to count everyone who uses it.

Don’t get me wrong I understand that this isn’t what the post is about. But when it comes to planning and funding I would hope they don’t forget that the capital region also has a decent amount of people that depend on the city of Canberra as well.

If that makes sense? 🙂

even nsw doesn’t want to include Queanbeyan 😂😂😂

Fran Maher is that you leaning on the fence? 😂

does that mean money will be spent on Tuggeranong now that we have growth?

I hope not. Tuggeranong got their share in the 80’s and early 90’s when that was the growth area.

Money should be invested in maintaining older areas and growing new areas like Molongolo.

People have been through this before and it’s a furphy. Even ACT Labor politicians don’t believe this claim that Tuggeranong got their investment in the 80s and 90s the same as other Canberra areas before them had got. Self government for canberra pulled all the planned road duplications, advanced education, public amenities, housing west of the Hyperdome, sports facilities and government services from happening as originally promised and planned.

Tuggeranong was meant to get the same facilities and infrastructure as Belconnen under the 1967 Y plan, but it got pulled at a later date.

Spatial audits have demonstrated that Tuggeranong hasn’t been funded properly, even the leading expert in ACT demography calls Tuggeranong “the land that time forgot”.

I know I’m out of step with the Sydney shock jocks but I like a growing population because it creates jobs and economic growth and leads to more diversity. I was against multiculturalism until around ten years ago but then realised how much better Australia had become because of it. It seems a win-win for all concerned.

Agreed John, so long as the investment in infrastructure is made to support the increased population. This hasn’t happened, in Canberra or in the rest of Australia. The money has, instead, been spent on recurring expenditure.

And it’s borrowed money which can never be repaid. How stupid are the people running this country?